When the story of Arctic melt makes it onto CNBC you know things have really fallen apart.

IF the Greenland ice sheet melts – it is.


Scientists warn on Arctic ‘economic time bomb’
The rapidly melting Arctic is an "economic time bomb" likely to cost the world at least $60 trillion, say researchers who have started to calculate the financial consequences of one of the world's fastest changing climates. 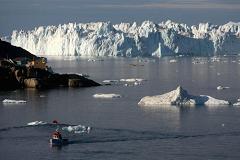 A record decline in Arctic sea ice has been widely seen as economically beneficial until now, as it opens up more shipping and drilling in a region thought to contain 30 percent of the world's undiscovered gas and 13 percent of its undiscovered oil.

However, the Arctic's pivotal role in regulating the oceans and climate means that as it melts it is likely to cause climatic changes that will damage crops, flood properties and wreck infrastructure around the world, according to research by academics at the UK's University of Cambridge and Erasmus University Rotterdam in the Netherlands.

This is likely to end up creating costs that will outstrip any benefits by three or more orders of magnitude, said Chris Hope of Cambridge's Judge Business School.

The Arctic has been warming at least twice as fast as the rest of the world for many years and the area of its sea ice, which melts and refreezes after every summer, has been declining by an amount almost equal to the size of the UK each year since 2001.

Last year, the summer ice shrank to its lowest point since satellite observations started in 1979, raising concerns about the impact on the climate.

The effect the European researchers have focused on is the way warmer Arctic waters are expected to hasten thawing of the permafrost beneath the East Siberian Sea off northern Russia that is believed to contain vast deposits of methane. This is a greenhouse gas some 20 times more potent than carbon dioxide, though it does not last as long in the atmosphere.

There is much debate about how long it might take to release these methane deposits, and what impact it would eventually have. But some scientists say there is already evidence of large plumes of methane escaping and others fear this could happen fast enough to accelerate global warming and eventually speed up other changes such as the melting of the Greenland ice sheet, which contains enough frozen water to push up global sea levels by 7 meters.

That is why the group felt it was important to assess the possible economic impact of such changes, said Peter Wadhams, a professor of ocean physics at Cambridge who believes the Arctic sea ice could completely vanish in summers as early as 2015.

"We're looking at a possibly catastrophic effect on the global climate that has been a consequence of this extremely fast sea ice retreat," he said.

The researchers assessed the impact of higher methane emissions with a newer version of the economic model used in the UK government's 2006 Stern Review on the economics of climate change, which concluded the benefits of curbing global warming early far outweigh the potential costs of not acting.

Depending on how much methane was emitted, they calculated its potential cost was likely to be $60 trillion, with 80 percent of the damage occurring in developing countries least able to curb the impact of more floods, droughts and storms.

"It's not just important for polar bears, it's important for societies and global economies," said Professor Gail Whiteman of Erasmus, adding her group's research underlined the need for world leaders to start thinking about what she described as an economic time bomb.

The researchers' have published an article on their work in the latest Nature science journal.

Correction: An earlier version of this story misstated how much sea levels could rise if the Greenland ice sheet melts. The correct amount is 7 meters.