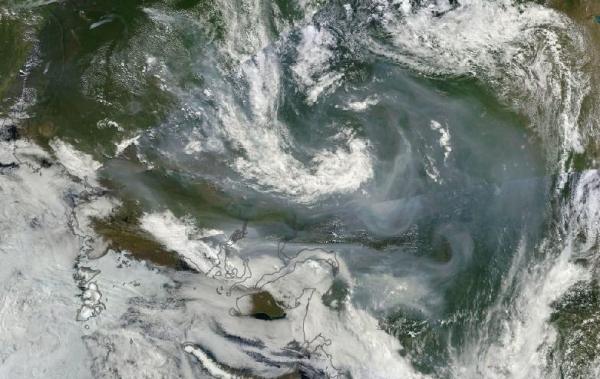 Add sea ice near record low levels, a mangled, wavy jet stream, heat dome high pressure systems that increasingly emerge in a thickening atmosphere, a global warming induced increasing of the hydrological cycle and warmth-amplifying methane seeps from the tundra and what do you get? Summer Arctic heatwaves that persist over days and weeks setting off temperatures in the 80s and 90s and sparking massive and terrifying fires that belch enormous clouds of methane-laced smoke larger than most countries.

***
Last week, a persistent Arctic heatwave re-intensified over Central Siberia, setting off a rash of wildfires while at the same time apparently forcing some of this region’s vast tundra methane stores to erupt. Throughout the weekend, these fires grew, expanding and multiplying, spurring Russia to call up nearly a thousand firefighters and a score of aircraft to combat these raging blazes. Fires continued to erupt throughout the weekend, growing in number to more than 170 separate blazes. This massive region of fires fed a vast cloud of smoke that has now expanded to cover an area about 2000 miles in length and 1200 miles in width.
NASA’s Aqua satellite has provided a recent image focusing in on the area featuring the densest cluster of these fires. The approximately 130 fires shown (but not including all the fires involved) are indicated in red. (Hat tip to Colorado Bob for the head’s up). 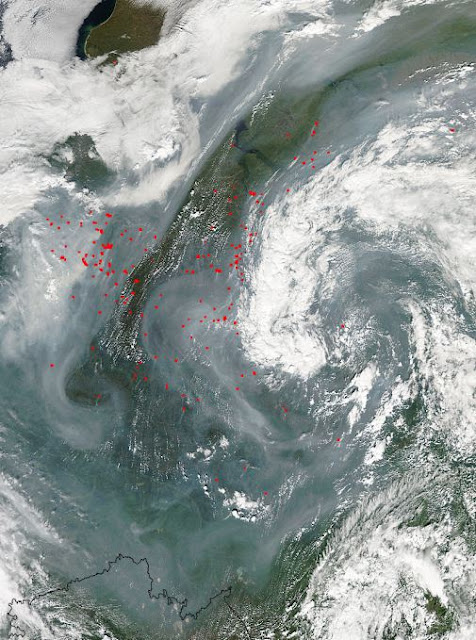 Much hotter than average conditions persisted over most of this smog-covered region on Monday as the heat dome high pressure system associated with the scorching Arctic temperatures and wildfires moved retrograde to a feeble Jet Stream and on toward Europe. Daytime temperatures over much of this Arctic region ranged from the mid 70s to the upper 80s with some locations showing highs in the lower 90s. 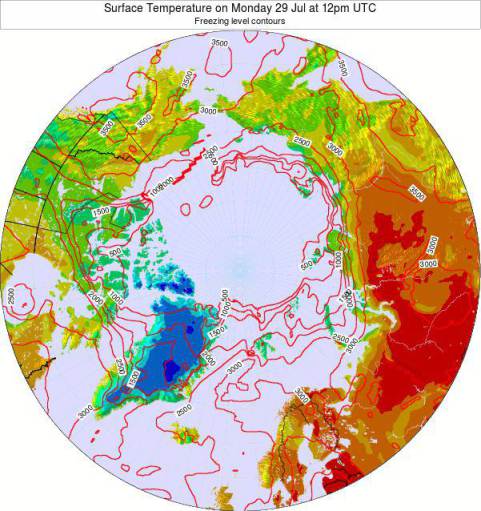 These Arctic heatwave conditions are expected to first shift toward Europe then move back over Siberia, eventually settling upon Kamchatka by late this week. According to these model forecasts, heatwave conditions will continue to persist for sections of Siberia at least until the end of this week. So Russia will likely continue to be under the gun for wildfires as the week progresses.
Methane spikes continue
Perhaps the most troubling event to occur in conjunction with Arctic heatwave conditions and a very large wildfire eruption over Central Siberia’s tundras and arboreal forest land is a disturbing methane pulse, also indicated by the Aqua satellite. This methane pulse emerged in conjunction with the heatwave that began last week and appears to have intensified somewhat in recent days. According the Methane Tracker’s A4R, the large clouds of smoke associated with the massive spate of wildfires show heightened methane levels even greater than those first observed last week. In some cases, the methane in the smoke clouds is around 2,000 parts per billion, nearly 200 parts per billion higher than the atmospheric average.
Given these dramatically elevated methane levels, one has to wonder if the fires are enhancing methane emissions from the thawing Siberian tundra and peat bogs.
This particular methane pulse also comes at a time when scientists are increasingly concerned about the potential for enormous methane pulses in the gigaton or tens of gigatons range coming from thawing submerged tundra in the East Siberian Arctic Shelf. A recent Nature article examined the subject in depth and caused broad controversy within the climate community. A NASA mission investigating Arctic methane emissions called CARVE is also seeking to clarify risks involved with the immense methane stores now being unlocked as the Arctic Ocean warms and as the tundra thaws.


The current massive spate of Siberian wildfires now appears to be at least as large those that occurred during June of 2012. In that event, massive blazes sent smoke across the Pacific Ocean to fill valleys on the West Coast of North America. With another week of heatwave conditions set for this region, it is possible that these already extreme conditions will intensify. So we’ll be keeping a close eye on what appears to be a still developing extreme event.
Posted by seemorerocks at 12:56