Massive holes in the Sun’s corona spotted by NASA telescopes

NASA's Solar and Heliospheric Observatory (SOHO) captured images of a massive hole in the Sun's corona a few weeks ago. Numerous cameras and telescopes trained on the Sun have been recording similar holes ever since. 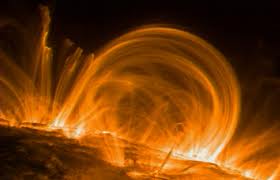 The hole showed up in early July and crossed the side of the Sun that was facing Earth around the middle of the month. It was so large that it covered nearly a quarter of the Sun's visible disk.

These holes open up in the corona due to changes in the Sun's magnetic field and they allow streams of fast-moving solar particles to escape into the solar wind. Coronal holes are nothing unusual. They happen most often towards the minimum of the sun's 11-year cycle and decrease in number towards the cycle's maximum (predicted for later this year).

The reason why the hole shows up as a dark region (when the Sun is always so bright) is because it's much cooler than the surrounding material. The image shows temperatures right around two million degrees Kelvin, with hotter temperatures showing up very bright (like in the active regions scattered about), and cooler temperatures showing up darker. Of course, you still wouldn't want to touch those darker regions. As with everything, temperatures on the Sun are all relative, and temperatures in those darker regions are still up in the hundreds of thousands of degrees, and possibly up to a million degrees or more.

NASA's Solar Dynamics Observatory (SDO) was watching too, and it recorded these images, which were strung together into a time-lapse video:


This wasn't the only coronal hole going on at the time, either. As this large hole tracked its way towards the other side of the Sun, SDO saw a smaller hole open up at the Sun's equator:


The reason why these coronal holes open up is still a mystery. However, with missions like SOHO, SDO and NASA's new Interface Region Imaging Spectrograph (IRIS), that launched in late June, multiple eyes are always trained on the Sun. With more of these amazing images beaming back to us here on Earth, and IRIS providing even higher resolution than we've seen so far, we can't be too far from figuring out the the answers to these stellar riddles