The Arctic cyclone in Canadian media

From regional Canadian media.
Scientists watch Arctic
cyclone chew up sea ice
Arctic scientists are watching in awe this week as a raging summer cyclone tears up what could become a record amount of rotting northern sea ice. 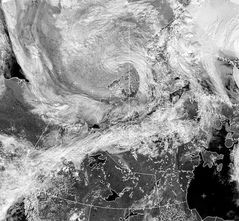 "We're really watching this year with a lot of fascination," said Matthew Asplin, an Arctic climatologist at the University of Manitoba.

Arctic cyclones are driven by low-pressure systems in which winds of up to 100 km/h blow counter-clockwise in spiral more than 1,000 kilometres across. They occur in both winter and summer, but are usually stronger in winter.

Cyclones are not unusual in the Arctic, but seem to be changing in recent years, said David Barber, one of Canada's top sea-ice experts.

"These cyclones are not getting more frequent, but they are getting deeper — which means stronger," he said.

And they're getting harder on sea ice, which they break up through wave action associated with high winds and through rainfall, which darkens the ice and makes it absorb more solar energy. The storms also bring up water from the depths, which is actually warmer than surface water.

"In 2009, we actually documented one of these events in which large, multi-year ice floes — Manhattan-sized — broke up in a matter of minutes," said Barber.

Last year, a particularly powerful cyclone is thought to have wiped out 800,000 square kilometres of ice. That contributed to record low sea-ice levels at the end of the 2012 melt year.

This year's storm over the Beaufort Sea formed about mid-week and is expected to die out on the weekend.

It isn't as strong as last year's, but the ice is thinner and weaker. As well, the ice has already been pummelled by earlier storms.

"The effects of (the storm) are nowhere near what we saw last August," said Asplin. "But because the ice is thinner and it's already been pre-conditioned, and because there's less volume, it's much more vulnerable to impacts from this sort of thing."

Barber said the ice is getting so weak that new categories have had to be created for it.

"We have a whole new class of sea ice in the Arctic, which we're calling 'decayed ice,'" he said.

Barber said the research icebreaker CCGS Amundsen can do 13.5 knots in open water. Through decayed ice, it can do 13 knots.

Changing sea-ice cover is increasingly being linked to southern weather patterns. The jet stream, which strongly influences weather at mid-latitudes, is driven by temperature differences between the Arctic and the equator, a difference that shrinks with the sea ice.

Ice coverage is slightly above last year's record low but still well below the 30-year average.

Much remains unknown about the role of Arctic cyclones in the annual freeze-thaw cycle. Back when the sea was thick and lasted for years, cyclones tended to spread the ice out and actually increase its extent, said Julienne Stroeve of the National Snow and Ice Data Center in Boulder, Colo. Now, when ice gets spread out, it simply breaks up and disappears.

"As our ice cover has thinned, some of our old rules are changing," said Stroeve.
Asplin said cyclones will be a big part of the research agenda when the Amundsen sets sail for the Arctic again later this month.

"This year has been very stormy. The month of August is definitely one to watch in the Arctic."

Posted by seemorerocks at 14:55