Egyptian security forces and armed men in plain clothes killed scores of Muslim Brotherhood protesters on Saturday as the brutal and organised crackdown on the Islamist party and its supporters appeared to be gathering pace.

In what is the worst single mass killing in Egypt since the fall of president Hosni Mubarak two-and-a-half years ago, a Brotherhood spokesman said 66 of the party's supporters were shot and killed on the fringes of a sit-in at a Cairo mosque demanding the return of former president Mohamed Morsi, who was deposed on 3 July, and another 61 were "brain dead" on life-support machines. Government officials claim that the number of dead was 65, a death toll greater than the Republican Guards massacre on 8 July that saw 51 killed.

The deaths came as men in helmets and black police fatigues fired on crowds gathered before dawn on the fringes of a round-the-clock sit-in near a mosque in north-east Cairo, Morsi's Muslim Brotherhood movement said.

"They are not shooting to wound, they are shooting to kill," said Brotherhood spokesman Gehad el-Haddad. "The bullet wounds are in the head and chest."

The latest violence came amid the continuing sharp polarisation within Egyptian society that has made the country increasingly ungovernable. Elsewhere on Friday, eight people were reported killed in clashes in Alexandria.

The latest violence was condemned by members of the international community. The head of European Union foreign policy, Baroness Ashton, said she "deeply deplored" the latest deaths, while Britain's foreign secretary William Hague said: "Now is the time for dialogue, not confrontation. It is the responsibility of leaders on all sides to take steps to reduce tensions."

The dead and injured were ferried into a makeshift field hospital near the Rabaa al-Adawiya mosque, where the floor was slick with blood.

In a bizarre episode, most western journalists in the country were invited on a helicopter ride over Cairo's Tahrir Square an hour before the massacre began. After the killings, the ministry of the interior denied it had used live ammunition on demonstrators, despite eyewitness accounts from journalists, including BBC correspondents, who were present during the killings.

"There must have been an injury every minute," said Mosa'ab Elshamy, a photojournalist unaffiliated with the Brotherhood, who photographed the attack for half an hour at around 4am.

The shootings occurred as the interior minister, Mohamed Ibrahim, said that Morsi – who has been held incommunicado at an army base for the last three weeks – was being moved to Torah prison, where Mubarak is also being held. He added, chillingly, that the pro-Morsi sit-ins in Cairo would be "God willing, soon … dealt with. With regards to the timing to disperse the protesters, there is complete co-ordination between us and the armed forces."

On Friday, civilian prosecutors announced they had launched an investigation into Morsi on charges of murder and conspiring with the Palestinian militant group Hamas. At the heart of the case are allegations that Morsi and the Brotherhood worked with Hamas to carry out an attack on a prison that succeeded in breaking Morsi and around 30 other members of the group out of detention during the 2011 uprising against Mubarak. The attack killed 14 inmates.

During the three weeks Morsi has spent in secret detention, he has been extensively interrogated by military intelligence officials about the inner workings of his presidency and of the Brotherhood. They have been seeking to prove that he committed crimes, including handing state secrets to the Islamist group. According to the Associated Press, briefed by unidentified military officials, Morsi has been moved three times under heavy guard and is currently in a facility outside Cairo.

The lethal assault on the Muslim Brotherhood's supporters came after national demonstrations called by the chief of the army, General Abdel Fatah al-Sisi, to give him backing to confront "violence" and "terrorism" – understood by many to be a thinly veiled code for a crackdown on the Brotherhood.

Although there is bitter dispute over how the violence began, and whether some of the Brotherhood supporters had weapons, most independent witnesses reported that most of the gunfire was being directed at those associated with the sit-in.

A leading figure in the Brotherhood, Mohamed el-Beltagy, has blamed the violence on Sisi's call for demonstrations on Friday.

"This is the mandate Sisi took last night to commit massacres and bloodshed against peaceful protesters denouncing the military coup," el-Beltagy said in a statement on his Facebook page.

The clashes began after hundreds of Morsi supporters moved out of their encampment outside the Rabaa al-Adawiya mosque late on Friday and towards a bridge in central Cairo.

One group began to set up tents on an adjoining boulevard, where they were planning to stay for at least three days, said Mahmoud Zaqzouq, a Muslim Brotherhood spokesman. 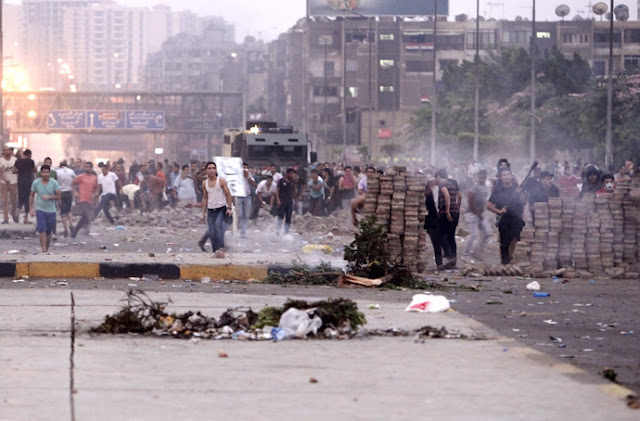 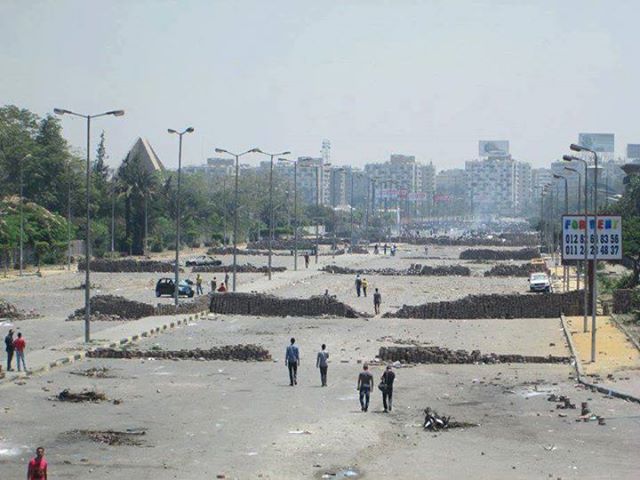 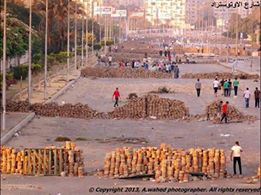