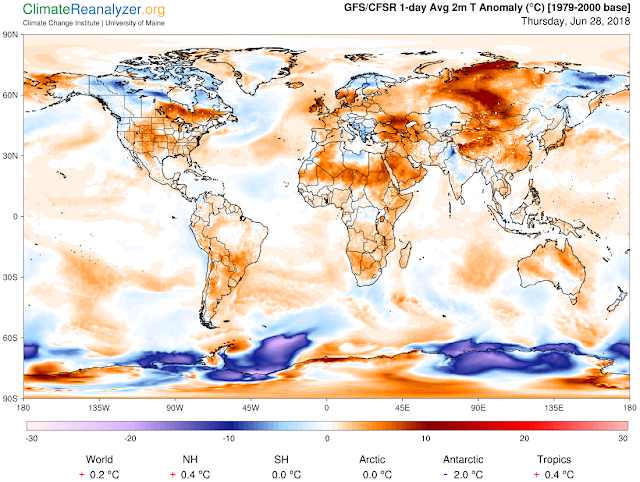 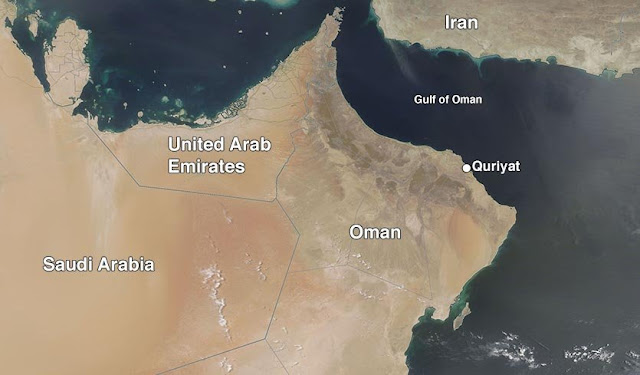 You may think it’s been hot where you are, but the coastal city of Quriyat (Qurayyat) in the Middle Eastern nation of Oman established a singularly unenviable heat mark on Tuesday: a 24-hour low temperature of 42.6°C (108.7°F), including the period from local midnight to midnight.

According to weather records expert Maximiliano Herrera, this sets a new world record for the hottest 24-hour-minimum temperature ever recorded. 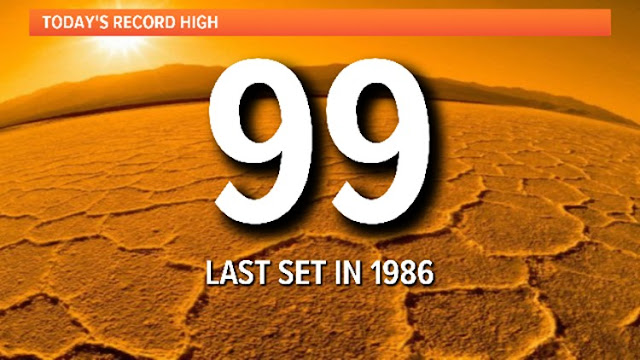 Denver tied its all-time heat record at 2:20 p.m., hitting 105 for the first time since 2012, according to the National Weather Service in Boulder.

The city also set a new heat record for June 28 when the temperature hit 100 degrees at 11:31 a.m., the National Weather Service said.

Along with the heat, wind and low humidity will create dangerous fire conditions throughout the state. A Red Flag Warning for extreme fire danger is in effect until 9 p.m. Tonight.

As a heat wave builds, dozens of wildfires are burning across nearly a half million acres of the U.S.

As I’m writing this Wednesday, June 27, 51 large, active wildfires are burning on more than 450,000 acres in the United States, most of them in western states and Alaska. That’s an area more than twice the size of New York City.

Overall, 2.2 million U.S. acres have already been scorched in just the first half of the year. That’s approaching the long-term average for an entire year. (For the latest statistics on large U.S. wildfires, go here.)

...shows smoke from several wildfires burning in California. The biggest is the Pawnee Fire near Clear Lake north of the San Francisco area. (In the screenshot, it’s indicated by the middle arrow.) The Pawnee Fire is now at 13,500 acres, with 25 percent containment today, up from just five percent yesterday.

“The fire is being driven by low relative humidity, erratic winds, and above normal temperatures,” according to the California Department of Forestry and Fire Protection. Twenty-two structures have been destroyed so far, including 12 homes. Some 600 additional structures are threatened.

And things have really only begun to heat up. Literally. 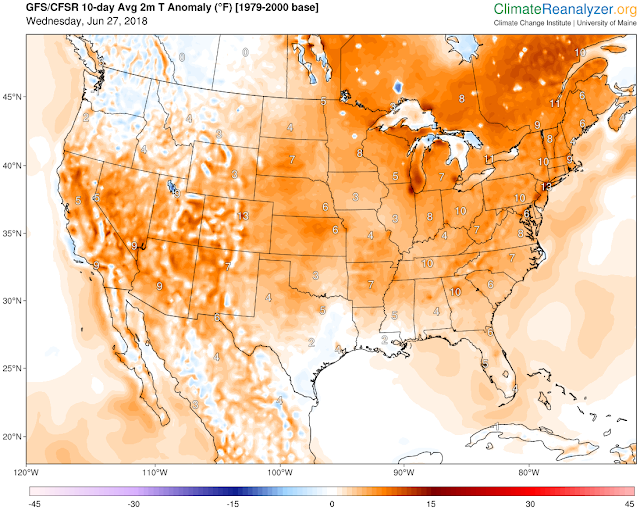 Those orange tones show how much average temperatures at two meters above the surface are forecast to exceed average over 10 days, as of today.


And here’s how maximum temps over the next 10 days are expected to look: 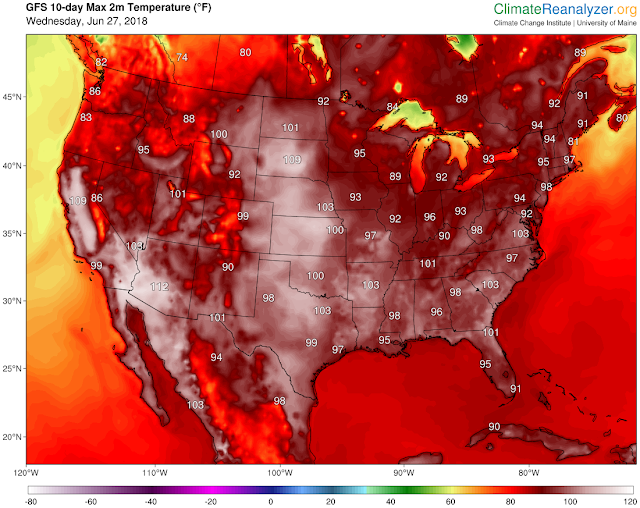 Many Upstate New York cities could see an official heat wave this weekend and early next week.

In our region, a heat wave is defined as three consecutive days with temperatures of at least 90 degrees. That's the forecast for most major Upstate cities for Saturday, Sunday and Monday. (See chart below.)

In addition, those temperatures combined with high humidity could lead to a "dangerously high" heat index, particularly on Sunday, the National Weather Service said.

"Temperatures will climb very close to record levels," the weather service said. Dew points, the measure of humidity, could reach into the 70s on Sunday, which "will produce dangerously high heat indices in excess of 100."

Some cities could break some long-standing temperature records, too. The forecast Sunday for Syracuse is 94 degrees, and the record of 91 for July 1 was set in 1954.

On Wednesday, most of Upstate will likely get about a half-inch of rain from thunderstorms. During the weekend hot spell, though, very little rain is expected.

Here's a look at the high temperatures predicted for Upstate New York this weekend.

Forecast high temperatures
New record as heatwave continues to bake parts of UK
Porthmadog in Wales reaches 31.9C, the hottest day of the year, with temperatures set to rise even further later this week. 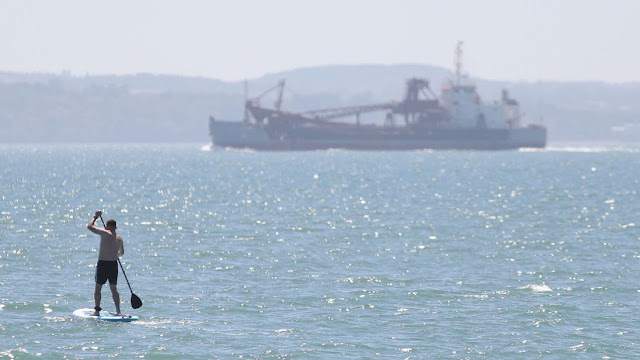 A record has been set for the hottest day of the year - the third in as many days.

And the record-breaking may not yet be over for the day.

A spokesman for the Met Office said: "The temperature seen at Porthmadog will not necessarily be the highest today but it is the record so far this year."

The Met Office said temperatures are set to climb further during the week, with a possible high of 33C (91.4F) on Thursday, soaring above the UK average of 17.3C (63.1F) for this time of year. 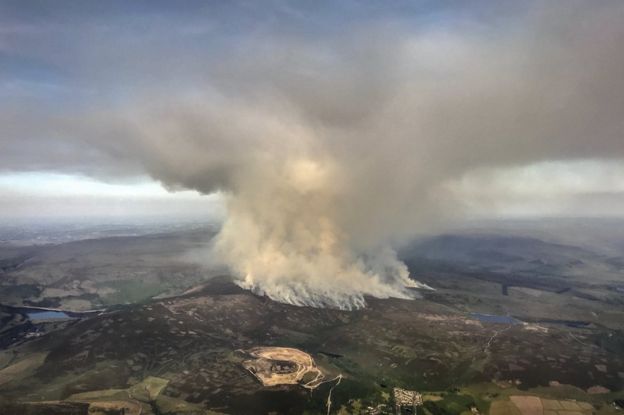 A huge moorland fire is continuing to spread because the land is "as dry as a tinder box" and winds are fanning the flames.

The blaze covers 3.7miles (6km) of Saddleworth Moor and has been raging since Sunday night.

More than 50 homes were evacuated in Carrbrook, near Stalybridge, Greater Manchester, and 150 people affected.

Dave Keelan, director of emergency response at Greater Manchester Fire and Rescue Service, said 70 of its firefighters were tackling the blaze.

He confirmed talks were ongoing to see if the Army could offer extra teams, four-wheel drive vehicles and air support.

Ireland: 'Even if it rains now, it's too late for some crops' - Farmers struggle in the heat as 'crop yields down by half' 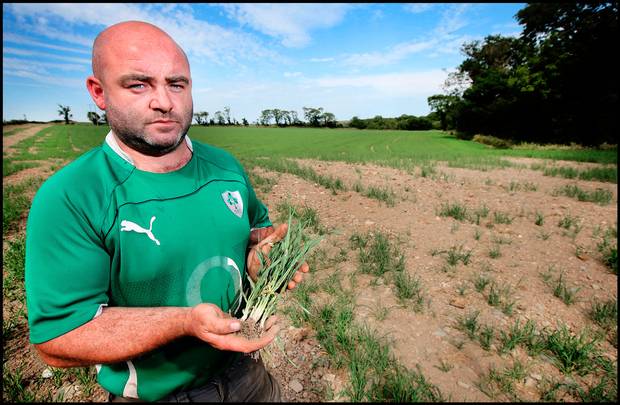 Many Irish farmers are struggling in the heatwave with one tillage farmer now concerned his income is about to be halved, as he fears he will lose 50pc of his crops in the rising temperatures.

John Murphy (37), who has a farm in Arklow, Co Wicklow, and one in Wexford, said after the severe winter, followed by the extreme temperatures, his crops - particularly barley - just won't cut the muster for sale.

That places the father of three young children in a precarious position.

"Half the crops will be a very poor yield due to the weather," Mr Murphy said. "We have been particularly badly hit by the harsh winter and then this heatwave.

"It hasn't rained for so long and for some crops, it's too late, for barley in particular. I've also less oat and no wheat.

Latvia declares the nationwide natural disaster due to prolonged drought 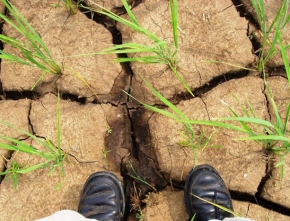 The Latvian Crisis Management Council on June 26th resolved not to declare a state of emergency in agriculture due to prolonged drought and instead chose to define the situation as "a natural disaster of a national scale", informs LETA.

The decision about declaring the nationwide natural disaster took effect on June 26th.

Prime Minister Maris Kucinskis (Greens/Farmers) explained that the Crisis Management Council had decided that there was no need to declare a state of emergency in agriculture, considering that the consequences of drought could be handled with the help of the existing legislation.

Having examined the situation in the agriculture sector, the council decided that, instead of the state of emergency, a nationwide natural disaster should be declared as this status would be sufficient to help farmers in the given circumstances.

Agriculture Minister Janis Duklavs (Greens/Farmers) said that a natural disaster in agriculture on the national scale had to be declared to spare farmers from penalties for non-performance regarding the EU-funded projects or bank loan payments as they could then invoke the force majeure clause.

However, the decision to declare a nationwide natural disaster does not mean payment of compensations to the drought-stricken farmers, he said.

According to the prime minister, the Finance Ministry has been instructed to prepare and to submit to the government a plan for a long-term solution regarding agriculture insurance.

As reported, the Agriculture Ministry presented to the Crisis Management Council a report summarizing requests from a number of municipalities, agricultural organizations and the Latvian Association of Local Governments for declaring a state of emergency in agriculture due to drought that had lasted for nearly two months.

A third of Poland's crops affected by drought: official 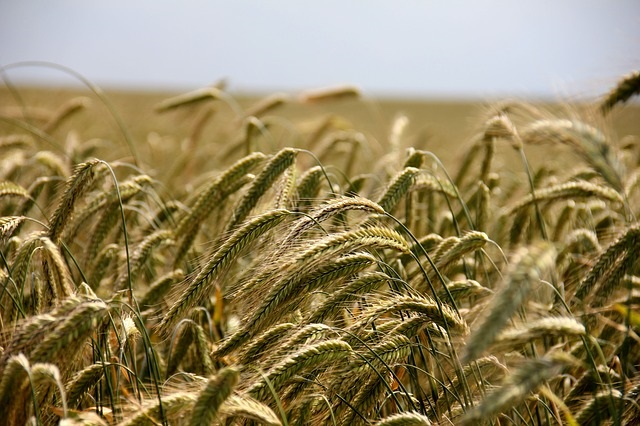 A drought has affected a third of Poland’s crops, the country’s new Agriculture Minister Jan Krzysztof Ardanowski said on Wednesday, ahead of a parliamentary session during which he is to propose aid for farmers.

The agriculture minister told Polish Radio that in some parts of the country as much as 100 percent of grains were damaged.

According to the agriculture ministry, of Poland’s roughly 2,500 local government districts, 2,300 have felt the effects of the drought.

According to state-run Polish Radio’s IAR news agency, as well as government aid, farmers and growers can also expect tax exemptions and preferential loans for boosting their business. (vb)

Flash floods have devastated for a second time in less than a year the town of Mandra in Attica, just outside Athens.

Unseasonable extreme rains- unheard of in Greece in the summer months- has left much of the Greek mainland drenched.

Flooding and rivers overflowing their banks were reported in regions throughout the mainland, including Larisa.

The town of Mandra, where 24 people lost their lives last November during torrential rains and extreme flooding, was hard hit again.

No loss of life was reported but numerous residents posted videos on Facebook that showed the force off the water that transformed streets into raging rivers.

The torrential rain of this type is uncommon in Greece especially at the height of summer, where poor infrastructure can leave citizens vulnerable to flooding. 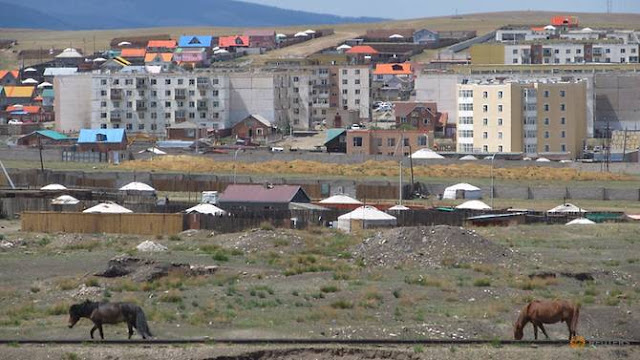 Persistent drought in the remote northwestern Chinese region of Inner Mongolia has caused a rat plague now affecting more than 4 million hectares of grassland, an area the size of the Netherlands, the official Xinhua news agency said....

Rodents are a common problem throughout Inner Mongolia's huge and sprawling prairies, and adapt relatively well to dry weather.

Citing the local agriculture department, Xinhua said late on Wednesday (Jun 27) that as much as 40 per cent of Inner Mongolia's territory had been affected by drought, causing more than 600 million yuan (US$90.92 million) in economic losses.


Since mid-June, Inner Mongolia has seen 25 per cent less rainfall and is around 1 degree Celsius warmer than the long-term average for the time of year, and nearly 35 million heads of livestock have already been affected, Xinhua said.
This is the latest extreme weather report available