"No More Turning The Other Cheek": Chinese President Vows He'll Strike Back At The U.S. 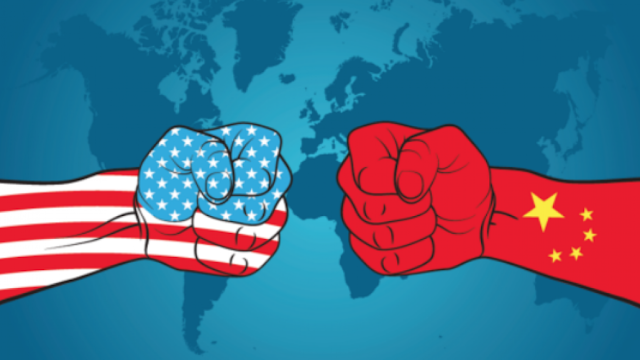 Update 2: Trump trade advisor Peter Navarro appeared on CNBC and in his cryptic way appeared to suggest that "there are no plans for investment restrictions" prompting an immediate bounce in markets:

But they certainly were not convinced as The Dow ended closing below its 200DMA for the first time since June 2016's Brexit reaction.
*  *  *
Update 1: The Dow has extended its losses after Xi's threats and is now down 450 points as VIX spikes above 19...

This move has erased almost all gains across all the major US equity markets in June.

*  *  *
With the market tumbling today on worries that the tit-for-tat trade war escalation between the US and China is now "irreversible", the WSJ just poured gas on the fire with a report that China President Xi Jinping is responding to the Trump administration’s trade-clash escalations "with a bare-knuckle approach that makes a bruising fight more likely."

Citing people who were present at a meeting last Thursday between Xi and a group of 20 mostly American and European multinational chief executives, the WSJ reports that  Chinese president said that Beijing plans to strike back.
“In the West you have the notion that if somebody hits you on the left cheek, you turn the other cheek,” the Chinese leader said, according to the people. “In our culture we punch back.”

The WSJ also adds that "Xi has urged senior officials in a recent meeting to promote China’s global role as the U.S. faces a backlash for its America First agenda, according to state media and Chinese officials."

This means that whereas until now China merely responded with tits to US tats, the gloves now officially come off.
As the Journal further writes, while for months China’s leadership and senior officials have been put off balance by Mr. Trump as he mixed calls for trade penalties with references to Mr. Xi as a friend, coupled with proactive attempts to appears Trump as Xi’s top economic lieutenant twice traveled to Washington for negotiations and offered stepped-up purchases of American goods only to come up empty-handed, Now Xi has settled on an unyielding approach in dealing with Washington.

“China is not going to yield to outside pressure and eat the bitter fruit,” a senior official said. “That’s the negotiation principle set by President Xi.”
What is perplexing about today's story is that on Friday, China's state-run Xinhua reported  a decidedly different, and far less provocative angle, one in which China's eagerness to engage the US was not mentioned:

Focusing on the summit's theme of opening up, cooperation and mutual benefit, Xi and the executives exchanged views on topics ranging from the Belt and Road Initiative, innovation and smart manufacturing, to green development and global governance.

Xi said the companies had participated in, witnessed, contributed to and benefited from the reform and opening-up drive of China over the past four decades, during which the country sustained rapid economic growth and helped more than 700 million of its people shake off poverty, according to UN standards.

In any event, while we have previously discussed extensively what tools are at China's disposal should the trade war escalate (see "Here Are The Six Ways China Could Retaliate In Trade War With The U.S."), including of course both currency devaluation and the "nuclear" option of dumping FX reserves including US Treasury and equities in the open market, here is the WSJ take on what Xi could do:

Beijing has a range of tools at its disposal. While its tariff options are limited by the level of American imports, Beijing can—as it has already done in some cases—hold up M&A deals involving U.S. companies, delay licenses, ramp up inspections or drive its 1 billion-odd consumers to shun American products.

One thing is certain: U.S. companies are likely to face increased inspections, further delays of regulatory approvals and an uptick in nationalist sentiment with a goal to get Chinese consumers to shun U.S. products.

"Apple’s $40 billion market in China for iPhones, the largest in the world, could quickly collapse,” Nicholas Lardy, a senior fellow at the Peterson Institute for International Economics in Washington, wrote in a blog post. “Similarly, General Motors sells more cars in China than in the U.S., sales that could easily be disrupted by the Chinese government.”

As the WSJ adds, Beijing’s "aggressive defense" is dashing hopes among businesses and investors of a settlement by July 6—the day when the White House has said it would roll out tariffs on $34 billion of Chinese goods such as machinery and home appliances. China plans to impose levies on U.S.-made soybeans, energy and other products of the same value on the same day.

On Sunday, media reports suggested that Trump plans to step up the pressure on Beijing by announcing plans to bar many Chinese companies from investing in U.S. technology firms and to block additional U.S. technology sales to China. According to subsequent clarification by Steven Mnuchin, the policy would apply to all nations, not just CHina, that "try to steal our technology."
* * *
At his meeting with global CEOs on Thursday, China's president suggested that preferential treatment awaits companies whose countries aren’t embroiled in a trade fight, according to the people briefed on the event.

“If one door closes, another will open,” the people cited Mr. Xi as telling the corporate leaders, who included executives from U.S. firms including Goldman Sachs Group, Prologis Inc. and Hyatt Hotels Corp. and from European companies including Volkswagen Group, AstraZeneca PLC. and Schneider Electric SE.

Separately, the WSJ also reports that Xi convened "a rare high-level conclave on Friday and Saturday with other members of the leadership and senior officials to outline strategy for foreign policy."

In remarks relayed by state media, Mr. Xi noted that the world was undergoing “profound and unprecedented changes” and that China needed to press its advantage in forming alliances and shaping global rules.

On Monday, Liu He, Mr. Xi’s chief trade negotiator, and a senior European Union official, European Commission Vice President Jyrki Katainen, said the two sides agreed to conclude talks on a bilateral investment agreement.
Still, China's attempts to displace the US as the world's superpower may be hobbled by the recent sharp slowdown in China's economy and the collapse in the Chinese credit impulse. This weekend's RRR cut by the PBOC showed just how much more will be needed for Chinese markets to be convinced that Beijing's response is proportional.

Peter Schiff: Expecting A Strong Dollar From Trade Wars Is "An Asinine Theory"

It looks like we’re heading toward a full-blown trade war.

As the war continues to escalate. Pres. Trump has levied more tariffs on Chinese imports in retaliation for China’s retaliation after the US announced its first round of tariffs. A lot of people seem to think this is bullish for the dollar. In fact, the greenback has surged in recent weeks. But in his latest podcast, Peter Schiff said this is a bunch of nonsense.
Posted by seemorerocks at 11:04