The most depressing energy chart of the year


Coal has got to go.

The energy giant BP’s annual Statistical Review of World Energy is a compendium of facts, figures, charts, and graphs on global energy use. This year’s edition is out, and it contains one of the more alarming, not to mention depressing, charts I’ve seen in a long while.

It’s not the chart most of the media coverage has focused on, which shows coal having a sharp reversal of fortune after several years of decline. 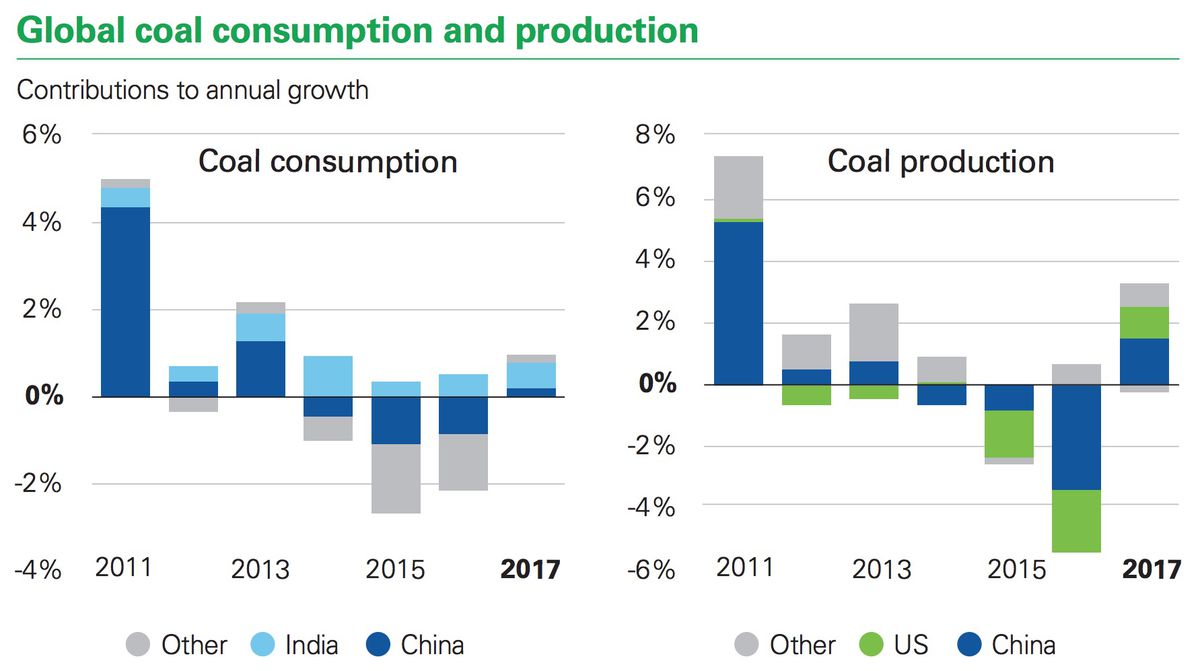 Nor is it this one, which shows the rate of growth in energy productivity — the amount of GDP the economy extracts from a unit of energy — slowing all over the world, and the growth in primary energy consumption rising sharply in Organisation for Economic Co-operation and Development (OECD) countries: 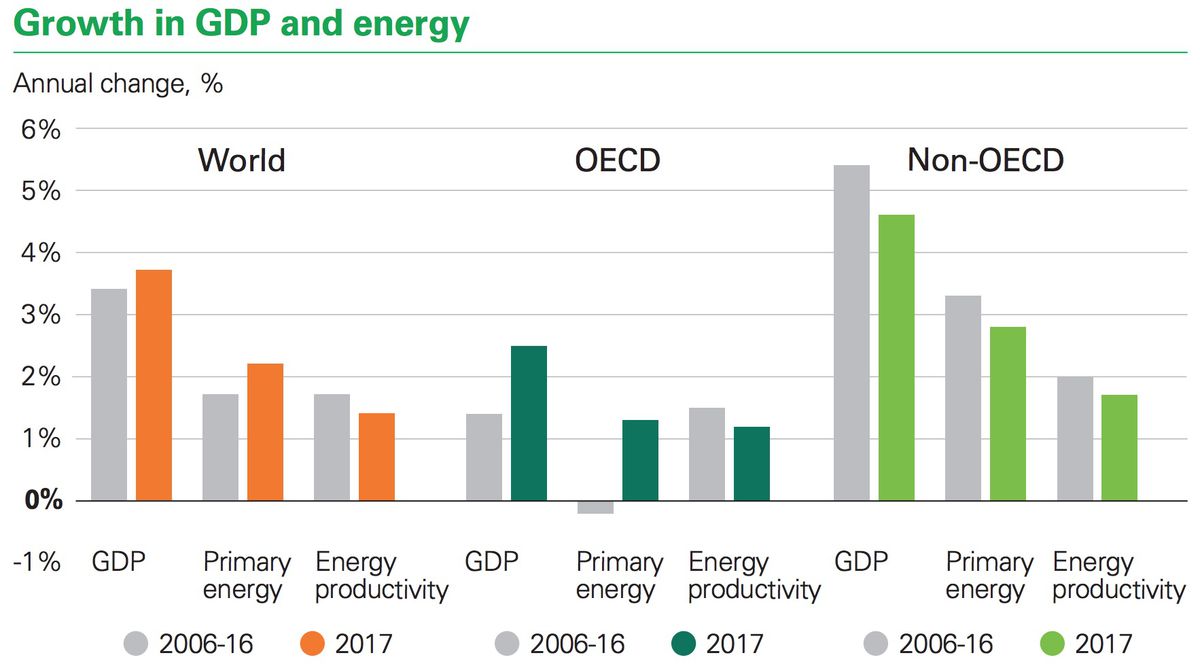 Both those graphs are disheartening, I grant you, and they help explain why global carbon dioxide emissions, after holding roughly steady for three years, started edging back up in 2017.

As BP chief economist Spencer Dale explains in an analysis that accompanies the report, this is is evidence that some of the short-term, cyclical trends that were helping drive the happy results of the past few years (energy demand growth slowing, energy productivity increasing, carbon emissions holding steady) have played themselves out. Heavy industry is picking up again in China; coal is growing quickly in India and ticked up again in China after years of decline.

Most of all, economic growth accelerated. Renewables continued their gangbusters growth, but as long as the majority of the world economy is powered by fossil fuels, a macro trend like economic growth is going to overwhelm the rise of clean energy on the margins.

That’s what happened in 2017: Growth, which had slowed for a few years, serving to highlight the rise of clean energy, cranked up again. The connection between economic growth and growth in carbon emissions is not quite “decoupled,” it seems.

But Dale warns against overreacting to these short-term swings. He writes that “many of the structural forces shaping the energy transition continued, particularly robust growth in renewables and natural gas.” Year-to-year fluctuations are less important than those bigger trends.

No, those aren’t the most depressing graphs. The one that spooked me (and Dale, who calls it “the most striking — and worrying — chart in the whole of this Statistical Review”) is this one:


In 1998, coal represented 38 percent of global power generation. In 2017, it represented ... 38 percent of global power generation.
In electricity, a sector that absorbs 40 percent of the world’s primary energy and produces more than a third of its emissions, the past 20 years have been running to stay still. No net decarbonization progress has been made.
Coal grew like crazy starting in 2000, so all the progress in renewable energy over the past decade has just scarcely served to bring coal back to where it was in 1998.
And speaking of “non-fossil” power, it didn’t help that even as renewable energy was growing, nuclear power was declining, a climate disaster activists have done too little to forestall.

And speaking of “non-fossil” power, it didn’t help that even as renewable energy was growing, nuclear power was declining, a climate disaster activists have done too little to forestall.
Here are power sources broken out individually: 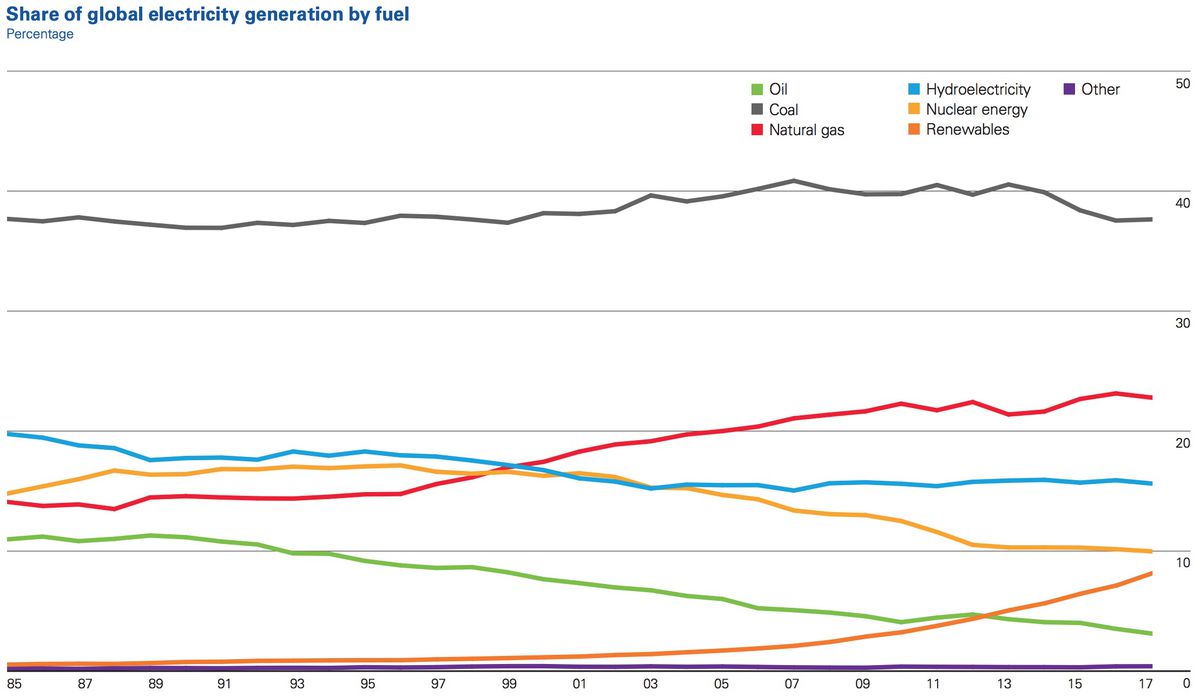 Nuclear has declined, renewables have risen, and the overall proportion of global electricity coming from non-fossil sources has remained roughly the same.
That’s not going to cut it to avoid catastrophic climate change. Scenarios that show us hitting the climate targets agreed to in Paris involve OECD countries completely decarbonizing the electricity sector by 2030 or so, and other countries not long after.
For all the bad news it has received lately, coal remains the greatest threat to a stable climate and the logical first target for a world serious about decarbonizing. It has got to go.