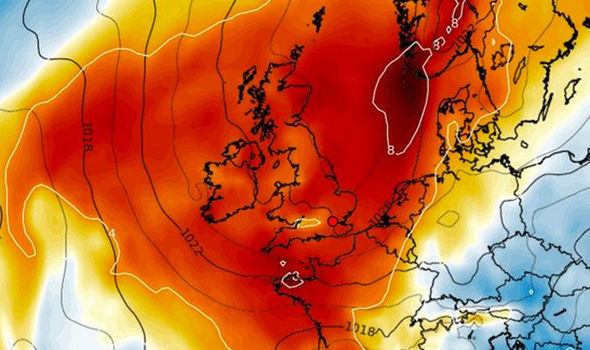 Temperatures are forecast to rocket through this week sparking fears of water shortages and melting pavements.

Winter gritters could be sent out to spread sand on the roads as blazing sunlight turns surfaces ‘into dough’, according to driving experts.

A plume of roasting air from Africa and the Continent threatens to push the mercury past the 90F mark this week.

The ‘alert and readiness’ advisory – which runs from tomorrow until Thursday – warns parts of the country are likely to exceed safety thresholds.

It states: “There is an 80-per cent probability of heatwave conditions between 9am Tuesday and 6pm Thursday in parts of England.

“By Tuesday, isolated spots in the North and West are likely to see temperatures exceeding their thresholds.

“This warning is likely to be extended from Thursday onward, with the chance of more areas being included, as the dry and settled conditions are expected to persist into the weekend.”

Cloudless, settled conditions threaten a dearth of rainfall as swathes of the country parch in soaring temperatures.

Parks and green spaces have turned brown and arid while environment officials warn river levels are on the decline.

More than 320 waterways are at below-normal and falling with 1,000 currently normal but dropping, according to the Environment Agency (EA).

The EA has flagged waterways in Kent, Norfolk, Yorkshire, Staffordshire and Cumbria as the most at risk.

Water suppliers have urged people to ‘use wisely’ with no sign of rain on the way for at least the next week.

Tuesday is forecast to be the hottest day of the year so far with no indication of any cool-down soon.

Temperatures are expected to widely rise into the high 20Cs with some spots expected to push past the 30C (86F) mark.

Met Office spokesman Grahame Madge said: “We expect fine conditions for the whole of the UK through the whole week.

“Tuesday is expected to be the hottest day of the year and we could hit 30C in parts, we are looking at similar values on Wednesday and Thursday as high pressure remains in charge.

“Although there is the chance of a bit of drizzle in far northern and western regions that is really all we expect and there is no immediate sign of any breakdown. 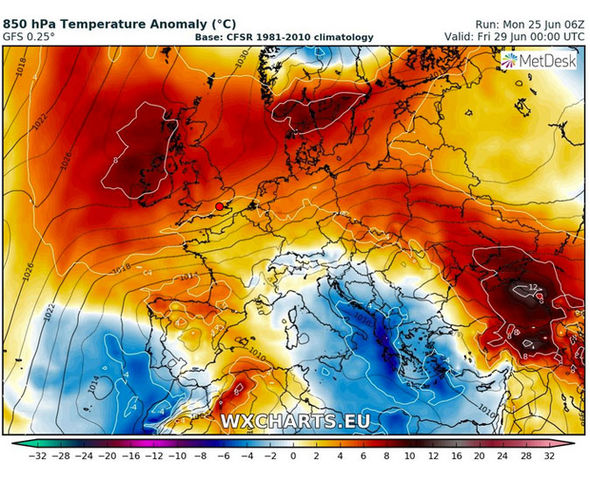 Exacta Weather’s James Madden added: “We initially expect to see temperatures close to or even pushing past 30C this week.

“By the first week of July we could even see highs in the mid 30Cs.

“This kind of heat is not going to be good news for everyone, it would be advisable for those at risk to be prepared.

“There is a danger that some people may underestimate the severity of the weather over the next week or so.”

The AA said surfaces soften at around 27C (80.6F) creating bulges and cracks triggering hazardous conditions on some routes.

Jack Cousens, head of roads policy, said: "While many drivers will seek some fun in the sun, our road network will be desperate for some shade.

“The temperature of the road surface can often be hotter than the air temperature as roads absorb the heat a bit like a storage heater.

“Roads can then become soft and sticky, like dough, this could lead to imperfections such as bulges and cracks which reduces the integrity of the road surface, and create more potholes when the weather starts to become inclement again.

“Should we have a sustained heatwave, drivers may get a surprise as the gritters make a return to our streets.

“However, rather than spreading salt, they will be dusting sand on the roads as a form of sunscreen.”

Public Health England has urged people to keep an eye on friends and relatives who may struggle during very hot weather.

Spokesman Dr Thomas Waite of Public Health England, said: “Much of the advice on beating the heat is common sense.

“It is a really good time to think about what you can do to protect yourself and your family and friends from heat.

“For some people, such as older people, those with underlying health conditions and young children, the summer heat can bring real health risks.

“That’s why we’re urging everyone to keep an eye on those you know who may be at risk this summer.

“If you’re able, ask if your friends, family or neighbours need any support.”

Malcolm Booth, chief executive of the National Federation of Occupational Pensioners added: “Elderly people are especially susceptible to dehydration as we lose our sense of thirst with old age.

“Drink plenty even if you don’t feel thirsty, cover up with loose clothing, try and avoid the hottest parts of the day between 10am and 3pm, and seek shade where possible.”

Households in Stornoway, Scotland, have been asked to use water “wisely” to prevent problems if the hot weather continues.

"By doing so, we can significantly reduce water usage which also helps the environment, saves energy and ensures that we continue to provide clear, fresh water to customers in the area.”

A spokesman for Thames Water added: “The winter and spring rainfall really helped to fill our reservoirs and recharge groundwater levels, but we can’t be complacent particularly with the current very dry and hot weather.

“Although we don’t expect to impose any temporary use restrictions this year, we encourage our customers to be water smart at home and at work whatever the weather as we continue to monitor the situation.”
Posted by seemorerocks at 19:40