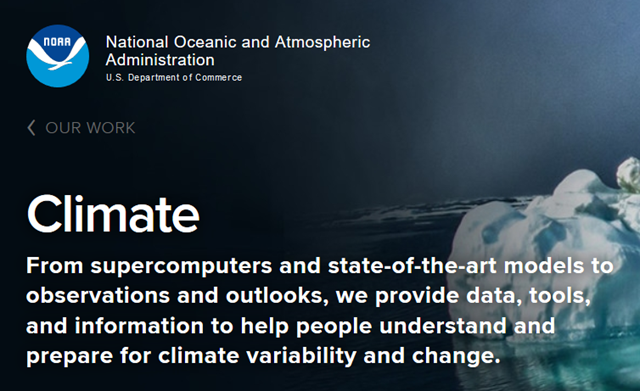 (The New York Times) – The Trump administration appears to be planning to shift the mission of one of the most important federal science agencies that works on climate change — away from climate change.

The National Oceanic and Atmospheric Administration, which is part of the Department of Commerce, operates a constellation of earth-observing satellites. Because of its work on climate science data collection and analysis, it has become one of the most important American agencies for making sense of the warming planet. But that focus may shift, according to a slide presentation at a Department of Commerce meeting by Tim Gallaudet, the acting head of the agency.
In the presentation, which included descriptions of the past and present missions for the agency, the past mission listed three items, starting with “to understand and predict changes in climate, weather, oceans and coasts.” In contrast, for the present mission, the word “climate” was gone, and the first line was replaced with “to observe, understand and predict atmospheric and ocean conditions.”
The presentation also included a new emphasis: “To protect lives and property, empower the economy, and support homeland and national security.” […]
Andrew A. Rosenberg, a former NOAA scientist and senior executive who now serves as director of the Center for Science and Democracy at the Union of Concerned Scientists and who has seen the presentation material, issued a statement responding to the NOAA presentation that called the move “a shocking change in the mission of one of the nation’s premier scientific agencies.” The decision, he said, is “misguided and harmful to our country.”
“Understanding the changing climate is becoming more critical by the day, as the effects of global warming mount,” he added.
Climate research already protects the economy, Mr. Rosenberg said. “NOAA is continuously working to improve forecasts of extreme events, which are intensifying in a warming world. As we know from last year’s wildfires and hurricanes, these kind of forecasts are critical for protecting American lives and infrastructure.” […]
Kevin Trenberth, a climate expert at the National Center for Atmospheric Research, said that the presentation “does raise alarm bells.” In an email, he asked, “Where is climate?”
“Instead of protecting and preserving ecosystems, it is one of exploitation,” he added. “The latter is especially offensive and shortsighted.” [more]

A Leading Climate Agency May Lose Its Climate Focus