A debate between Paul Beckwith and Dane Wigington

The following reflections are just that and largely rendered irrelevent by fast-moving events in the world climate.

“This is bio-mimicry. This is just trying to help Nature do something that it has been doing for a long time.Instead of trying to destroy Nature and working against Nature this is about looking at methods to getting Nature to help us”
--Paul Beckwith (39’ mark - https://www.youtube.com/watch?v=hyZ4z0t_vfQ&t=2214s

“Insanity is doing the same thing over and over again and expecting different results"?”

A discussion on geoengineering 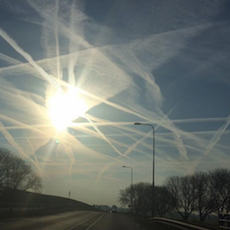 Geoengineering is usually a topic that I try to avoid like the plague largely on the grounds that it is has usually been a method for people who are essentially climate change deniers to distract and say "look here, don't look there".  In other words it can be a fine method from distracting people from the responsibility of the oil companies (who have known about this for longer than anyone else) and of industrial civilisation (as a heat engine) as a whole. I have therefore quite aggressively deflected attempts to introduce this into the narrative for that reason.

For that reason alone.

I have never totally denied that some form of geoengineering is going on and the devastating fires in Northern California and the strange way in which they destroyed homes whole leaving vegetation largely intact persuaded me that something in addition to climate change as it is most commonly described is indeed happening.

The other day my trusted friend, Juanita, pointed me to Dane Wigington's Geoengineering Watch. Out of respect for her I decided to have a look. I had a listen and found to my surprise that Dane is in fact talking about many of the things I am talking about on my blog, including on the nature of geopolitics and US imperialism. Indeed there was a congruence in what he is saying that I would be hard-pressed to ignore.

What surprised me was that he was not denying anthropogenic climate change at all but in effect he is saying that "climate engineering is not mitigating the unfolding abrupt climate shift, it is exacerbating it."

Further. "The power structure and the geoengineers who serve it are increasingly desperate to mask the unfolding Arctic cataclysm. Why? To avoid panicking populations in order to maintain the current paradigm (and thus their stranglehold on power) till the last possible moment."

If I could summarise (in Dane's words):

"Massive methane eruptions are pushing the planet toward Venus Syndrome. The climate engineering cabal is completely committed to chemically ice nucleating the polar regions in an unimaginably desperate and destructive attempt to cover up the unfolding methane catastrophe. For well over 70 years global powers have been consistently ramping up covert climate engineering programs that have now all but completely derailed the planet's life support systems. Without the knowledge or consent of their populations, governments around the world colluded and collaborated on the organization and deployment of incredibly destructive climate "intervention" programs that are further fueling the catastrophic consequences of anthropogenic activity on planet Earth."

That does not sound or feel like a denial of anthropogenic climate change to me - rather a different emphasis and an attempt to introduce another factor.

"The massive elephant in the room has been, and still is, "stratospheric aerosol geoengineering" (SAG), AKA "solar radiation management" (SRM)."

Much of what Dane Wigington says I would have to say I agree with.

I do not have the time or the mental energy to go deeply into the evidence he presents but I have seen enough to convince me that some form of weather modification is going on. The changes that I have observed, the disappearance of the pristine blue skies we used to get in New Zealand, the solid banks of cloud day-after-day, week-after-week, the whiplash weather - have certainly demonstrated to me that the climate is changing far, far more rapidly than anyone (bar very few) are willing to admit.

I can also testify that the powers-that-be - the government, scientists and media are all lying through their teeth and as far as I can see (and I have reported on this) they are even lying about the weather and even recorded temperature in a way to hide the extent of the damage and to deflect people's attention away from the reality.

How many times have I pointed this out?!

So,it seems Dane Wigington and I are on the same page in more ways that I would ever thought.

However, for all I find myself resistant to what is perhaps his central tenet.

"Of all the forms of decimation the human race has inflicted on our formerly thriving biosphere, the ongoing geoengineering assault is mathematically the most ominous and destructive."

When I contemplate two centuries of human activity and the amount of carbon dioxide and other greenhouse gasses spewed out by the world's industries I indeed find i difficult to imagine that this can be the most significant element in the destruction of the ecosphere.

I have always been averse to reductionism in western science and the inability that there is a web of non-local causation. It is not a case of 'either-or' - the world is simply not that way.  There is no reason why there can't be abrupt climate change as described by those who have the courage to speak the truth AND some form of geoengineering.

Because I have this view of the world and perhaps because I have been poisoned by toxic pesticides (just as people have been poisoned by aluminium injected into the atmosphere coming down in the rain) and a health condition that reductionistic medicine fails (perhaps even refuses) to diagnose I am sympathetic to the argument. The counter-argument from people who identify with 'Science' reminds me of the people who will poo-poo the idea of toxins in the environment that are making people sick.

A debate between Dane Wigington and Paul Beckwith

I have always held Paul Beckwith in high regard for being one of the few voices that is speaking out about the nature of the climate change emergency. However, some of that regard has been eroded through his altercations with Guy McPherson, his insistence that near-term extinction is impossible because people will live in nuclear submarines and the like - and more recently since his broader world view has come out since the 2016 US elections.  His pro-Hillary position and his embracing of the Russiagate lie - and overall support for the Empire has become very clear.

I don't mind people having a different opinion but when it goes so deep it does mean that I can't take what Paul says at face value.

About a month ago Paul took part in a radio debate with Dane Wigington. Speaking for myself whatever the merits of the geoengineering argument he demonstrated himself to be deeply immersed in the reductionism I refer to above.

He ain't no ecologist! That much is sure.

But perception is everything and you may hear something completely differently from me so here is the full 2-hour debate so you can make up your own mind.

If I could make one observation which should be non-controversial and that is that (agree with him or not) Wigington does cite actual historical documents while Paul tends to rely on his authority as a scientists - something I have always been averse to in scientists who seek to softpeddle abrupt climate change.

One (non) argument Paul uses against Wigington is that "no scientist will agree with you". That does not hold water for me because I am fairly sure that it would be difficult to find a consensus of scientists talking on the record who would agree with his interpretation with regard to the climate change emergency.

The absence of a consensus does not mean something is not true.

Dane Wigington cites various pieces of evidence for his contention that weather modification (and he does not mean cloud seeding as argued by Paul!) has been going on since the 1950's

For example, I was unaware of this excerpt from a speech by (then) vice-president Lyndon B Johnson in 1962


And then there is this from the Senate Committee on Commerce, Science and Transportation in 1978. 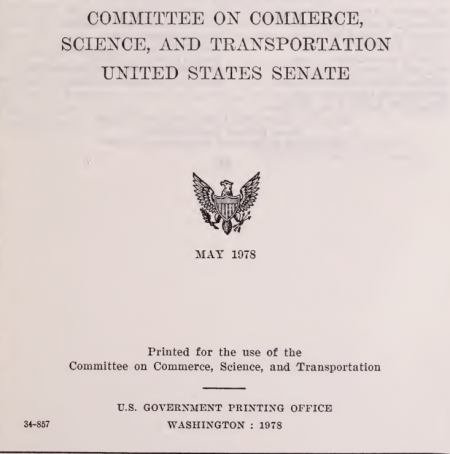 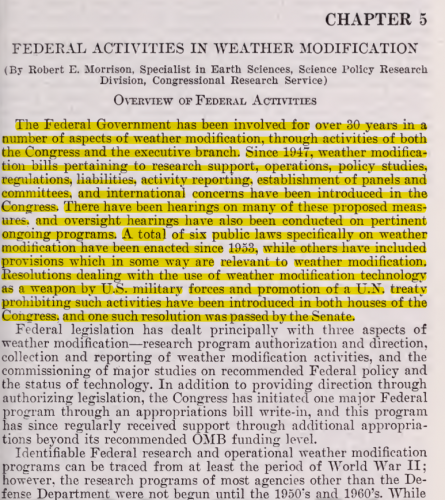 These documents and more can be found at the website https://www.geoengineeringwatch.org

In conclusion, I am only providing some reflections about the ongoing debate and am trying to be as non-judgemental as I can and to report that I am somewhat agnostic about the question so am not willing to enter the chorus of voices who say that “the chemtrailers are nutcases”

If you are talking about the mass of people who populate social media then the above label is certainly true.

In truth, if Guy McPherson is anywhere near right about what might happen to global grain crops and the world economy this debate is irrelevant.

We can argue forever, it seems, about closing the gate. The truth is that the horse has bolted and is not coming back.

In this context I will leave the last word to Guy McPherson.