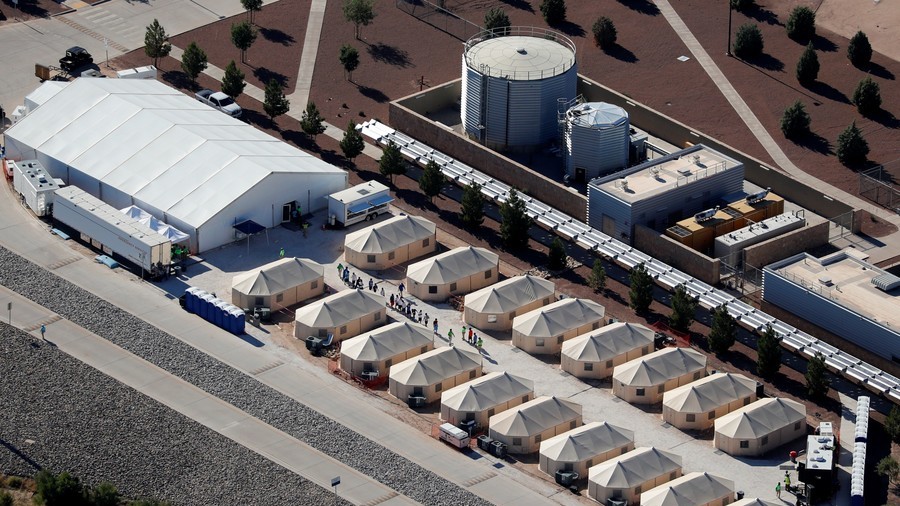 RT,
20 June, 2017
US President Donald Trump signed an executive order ending the practice of separating children from their families in detention centers for illegal immigrants. The order will likely be challenged in court, however.
“I'll be signing something in a little while that's going to do that," Trump said on Wednesday morning. “I'll be doing something that's somewhat preemptive and ultimately will be matched by legislation I'm sure.”

The “something” is an executive order to keep families together in immigration detention facilities, which Trump signed on Wednesday before departing for his scheduled trip to Minnesota.

‘No borders, no country’: Trump digs in on immigration, says Democrats want illegals to ‘infest’ US

The current practice of housing children at facilities run by the Department of Health and Human Services stems from a 1997 Flores settlement, under which the Clinton administration agreed not to hold children in immigration jails for more than 20 days. Subsequent administrations chose to implement that law by releasing the families into the US with a promise they would appear before immigration courts. In most cases, that would never happen.

“We’re going to keep families together, but we have to keep our borders strong,” Trump said.

The temporary measure will allow the Department of Homeland Security (DHS) to detain families crossing the border illegally together, except "when there is a concern that detention of an alien child with the child’s alien parent would pose a risk to the child’s welfare."

It also instructs the Department of Defense to provide "any existing facilities available for the housing and care of alien families, and shall construct such facilities if necessary."

Meeting with GOP lawmakers at the White House earlier in the day, Trump brought up that a deal on immigration with the Democrats was almost done in January, but a federal judge ruled in favor of keeping an Obama-era executive action shielding some illegal immigrants, known as DACA.

“All of a sudden they weren’t there anymore,” Trump said.

Democrats have refused to support any of the proposed immigration bills in Congress, saying that Trump can fix the family separation issue through executive action.

“There are so many obstacles to legislation and when the president can do it with his own pen, it makes no sense,” Senate Minority Leader Chuck Schumer told reporters on Tuesday. “Legislation is not the way to go here when it’s so easy for the president to sign it.”

The American Civil Liberties Union (ACLU) has already announced it would challenge reunifying children with their parents, since that would mean effectively putting them in jail, violating the terms of Flores.