As the combination image below shows, it was as hot as 32.7°C or 90.9°F (left panel, at the green circle) on June 11, 2018, on the coast of Hudson Bay. The right panel shows the jet stream crossing the Arctic, while numerous cyclones are visible on both images. 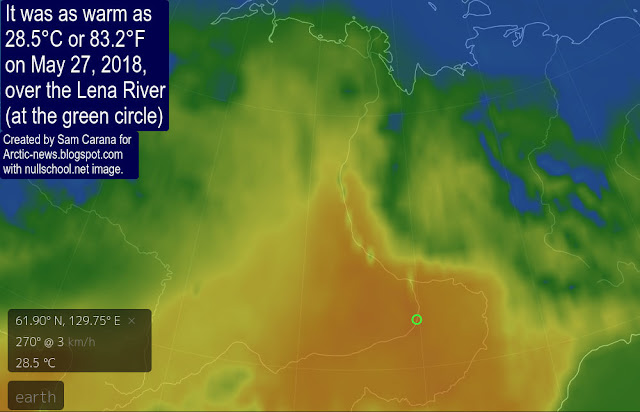 There are three ways in which heat can enter the Arctic Ocean:

1. Heat is reaching the Arctic Ocean through the atmosphere. 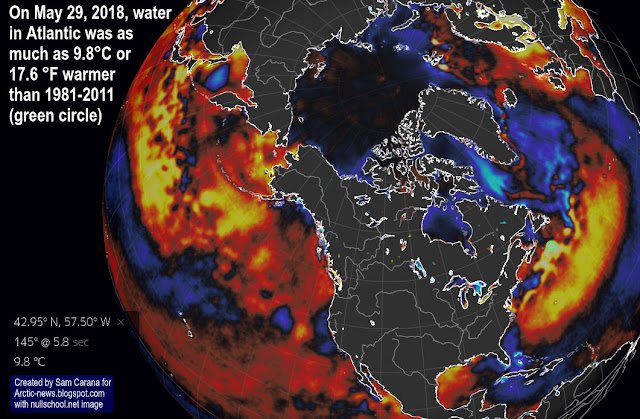 3. Heat is also reaching the Arctic Ocean from the Atlantic Ocean and the Pacific Ocean.

Feedbacks, such as changes to the jet stream can further speed up warming of the Arctic Ocean. 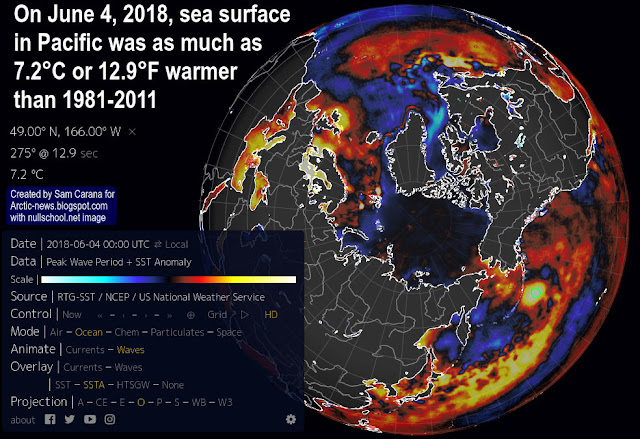 As the Arctic warms faster than the rest of the world, the temperature difference between the Arctic and the Equator decreases, the Jet Stream becomes wavier, with longer loops that allow more warm air to enter the Arctic and at the same time allow more cold air to flow out of the Arctic (feedback #10 on the feedbacks page). 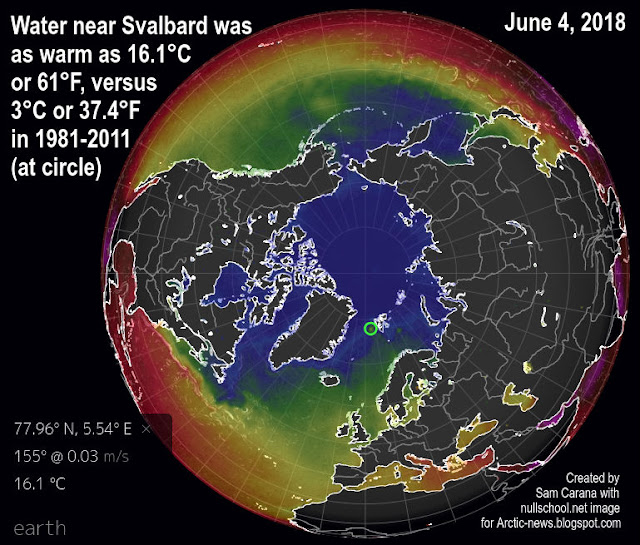 As temperatures keep rising, increasingly stronger winds over oceans are also causing more heat to enter the Arctic Ocean from the North Atlantic, and from the Pacific Ocean. 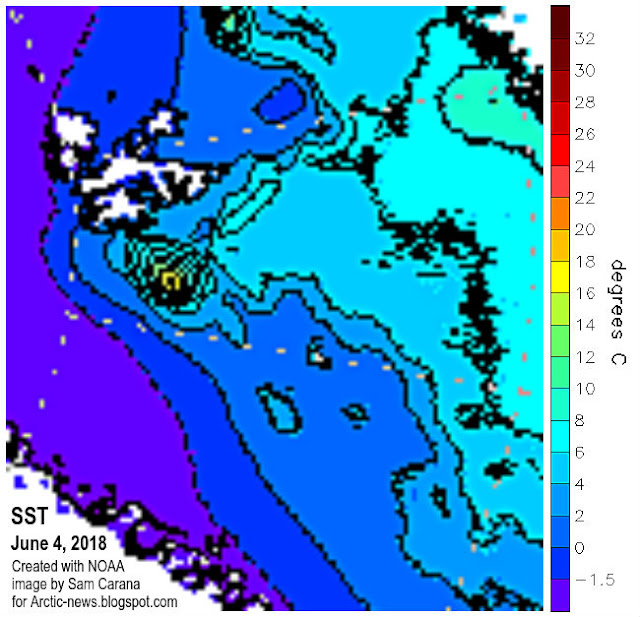 For more background on the warm water near Svalbard, also see the earlier post Accelerating Warming of the Arctic Ocean.

This heat will warm up the water underneath the sea ice, thus melting the sea ice from below.

Furthermore, as the sea ice retreats, more sunlight will be absorbed by the Arctic Ocean, instead of being reflected back into space, thus further speeding up sea ice decline.

Ocean heat is particularly critical since such a large part of global warming (93.4%) is going into oceans. 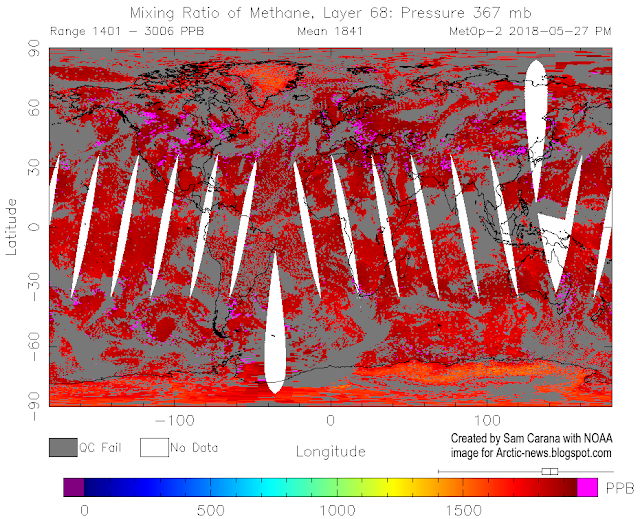 Methane releases from the seafloor of the Arctic Ocean can dramatically warm up the atmosphere, especially at higher latitudes. 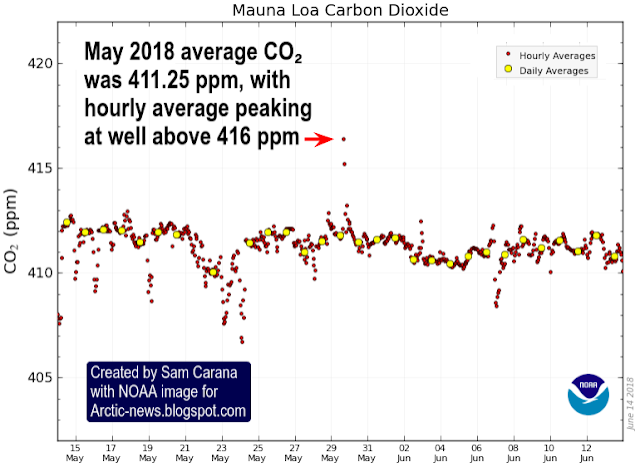 Mean global methane level was as high as 1877 ppb on June 13, 2018, at 254 mb, further confirming that more methane is increasingly accumulating at greater heights in the atmosphere. 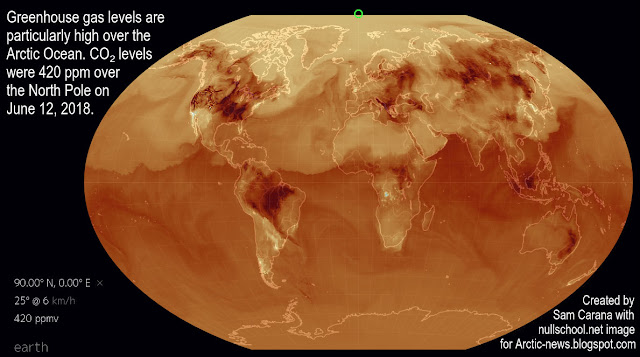 NOAA records show that the average May 2018 CO₂ level was 411.25 ppm at Mauna Loa, Hawaii, while the hourly average peaked at well above 416 ppm, as illustrated by the image on the right.

"CO₂ levels are continuing to grow at an all-time record rate because burning of coal, oil, and natural gas have also been at record high levels,” said Pieter Tans, lead scientist of NOAA's Global Greenhouse Gas Reference Network in a news release. "Today's emissions will still be trapping heat in the atmosphere thousands of years from now."

Greenhouse gas levels are particularly high over the Arctic Ocean. CO₂ levels were 420 ppm over the North Pole on June 12, 2018. The situation is getting even more critical as we've left the La Niña period behind and are now moving into an El Niño period, as illustrated by the image on the right.

Given the above, it's amazing that the IPCC in its 'final draft 1.5°C report' insists that "If emissions continue at their present rate, human-induced warming will exceed 1.5°C by around 2040" (according to a recent Reuters report). The final draft is now going to governments for their scrutiny, with the danger that the dire situation may be watered down even further.

Governments should be urged to confirm that temperatures could rise dramatically over the next few years. Accordingly, comprehensive and effective action needs to be taken, as described at the Climate Plan page.

• Accelerating Warming of the Arctic Oceanhttps://arctic-news.blogspot.com/2016/12/accelerating-warming-of-the-arctic-ocean.html