Making sense of the Putin-Trump summit 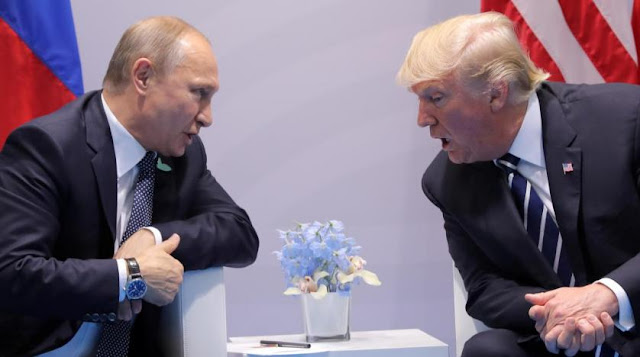 The meeting that the Deep State strived to make impossible with fabricated “Russiagate” assertions and an orchestrated “investigation” by Mueller has now been set in place by no less than Deep State neocon operative John Bolton. Patrick Lang explains how this came about:

Many see benefits from the Putin/Trump meeting.
For example: https://www.strategic-culture.org/news/2018/06/25/these-are-benefits-of-us-russia-summit.html

Putin himself sees benefits in the meeting as does Trump. Putin sees hope of improving relations between the two governments. Of course, the “strained relations” are entirely due to Washington, which has demonized both Russia and Putin with false accusations and hostile acts such as illegal sanctions. It was miscalculation for Washington to expect Russia to give up its Black Sea naval base to Washington’s coup in Ukraine.
What can an agreement be based on? Bolton’s position has been opposed to making any agreement with Russia or cooperating with Russia in any way. From the neoconservative standpoint, Russia is in the way of US world hegemony. As the neoconservative foreign policy doctrine states, it is a principal US goal to prevent the rise of any country that could serve as a check on American unilateralism. Russia is a challenge to the American World Order because Russia stands in the way of the American unipolar world.
A successful summit will require Trump to reject this neoconservative doctrine. If Trump can pull this off with Bolton sitting by him, Trump’s critics will look very silly. Do Bolton and the Deep State have a way of baking failure into the summit that will ensure the continuation of Russia’s enemy status, thereby sustaining the enormous budget and power of the US military/security complex? Is Trump a superman who can overcome this powerful vested interest about which President Eisenhower warned Americans in 1961? How much stronger is this complex more than half a century later after being nourished by decades of Cold War and War on Terror?
Assad and no doubt Iran are convinced that negotiations with Washington are a waste of time. Assad has concluded that “the problem with US presidents is that they are hostage to lobbyists. They can tell you what you want to hear, but they do the opposite. That’s the problem, and it’s getting worse and worse. Trump is a stark example. That’s why when talking to the Americans, discussing something with them does not settle anything. There will not be any results. It’s a simple waste of time.”
https://www.fort-russ.com/2018/06/assad-says-talks-with-the-trump-a-waste-of-time/

Assad’s view has the evidence on its side. One of Trump’s first actions was to unilaterally pull out of the multi-nation Iran nuclear agreement. There is no evidence that supports the hopeful Russian view.
It would be an interesting exercise to list all the agreements Washington has made over the course of US history and to calculate the percentage that Washington kept. If Putin doesn’t want to be taken for a ride, he should contemplate the words of Chief Joseph of the Nez Perce summing up his negotiations with Washington: “I have heard talk and talk, but nothing is done. I am tired of talk that comes to nothing. It makes my heart sick when I remember all the good words and broken promises.”