In today’s febrile atmosphere I ask how this will be seen by the liberal Left.

This Is Just the Beginning 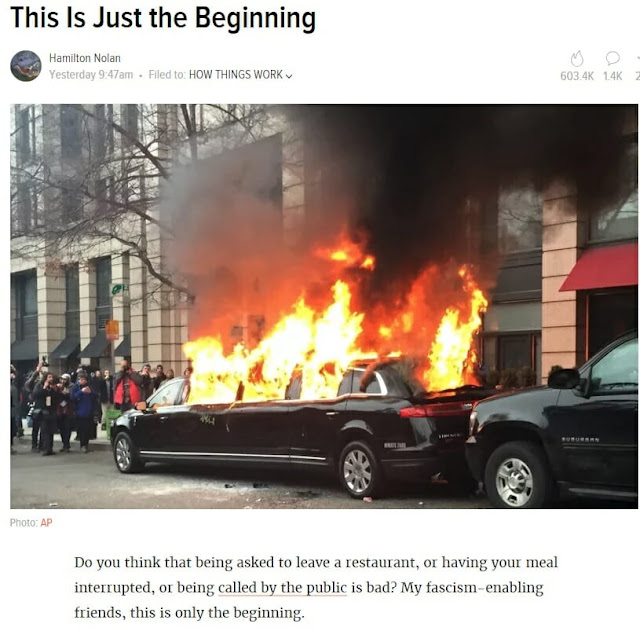 Do you think that being asked to leave a restaurant, or having your meal interrupted, or being called by the public is bad? My fascism-enabling friends, this is only the beginning.

One thing that people who wield great power often fail to viscerally understand is what it feels like to have power wielded against you. This imbalance is the source of many of the most monstrous decisions that get made by powerful people and institutions. The people who start the wars do not have bombs dropped on their houses. The people who pass the laws that incarcerate others never have to face the full force of the prison system themselves. The people who design the economic system that inflicts poverty on millions are themselves rich. This sort of insulation from the real world consequences of political and economic decisions makes it very easy for powerful people to approve of things happening to the rest of us that they would never, ever tolerate themselves. No health insurance CEO would watch his child die due to their inability to afford quality health care. No chickenhawk Congressman will be commanding a tank battle in Iran. No opportunistic race-baiting politician will be shunned because of their skin color. Zealots condemn gay people—except for their own gay children. The weed-smoking of young immigrants should get them deported—but our own weed-smoking was a youthful indiscretion. Environmentalist celebrities fly on carbon-spouting private jets. Banks make ostentatious charity donations while raking in billions from investments in defense contractors and gun manufacturers and oil companies. This is human nature. It is very, very easy to do things that hurt others as long as those same things benefit, rather than hurt, you. Self-justification is a specialty of mankind.....

This is all going to get more extreme. And it should. We are living in extreme times. The harm that is being done to all of us by the people in the American government is extreme. To imagine that Mexican immigrants should happily cook for and serve meals to people who enable a man who is determined to demonize and persecute them as subhuman criminals is far more outrageous than the idea that those enablers should not be served in restaurants. I do not believe that Trump administration officials should be able to live their lives in peace and affluence while they inflict serious harms on large portions of the American population. Not being able to go to restaurants and attend parties and be celebrated is just the minimum baseline here. These people, who are pushing America merrily down the road to fascism and white nationalism, are delusional if they do not think that the backlash is going to get much worse. Wait until the recession comes. Wait until Trump starts a war. Wait until the racism this administration is stoking begins to explode into violence more frequently. Read a fucking history book. Read a recent history book. The U.S. had thousands of domestic bombings per year in the early 1970s. This is what happens when citizens decide en masse that their political system is corrupt, racist, and unresponsive. The people out of power have only just begun to flex their dissatisfaction. The day will come, sooner that you all think, when Trump administration officials will look back fondly on the time when all they had to worry about was getting hollered at at a Mexican restaurant. When you aggressively fuck with people’s lives, you should not be surprised when they decide to fuck with yours.

Stop working for this man. Stop enabling him. Stop assisting him. Start fighting him. The people who are responsible for what is happening are not going to get out of this with their happy wealthy respectable lives unscathed. This is a country that locks poor people in cages for decades for trying to make $20. This is a country that is “tough on crime.” Remember? And the ones who make the laws are not going to like what happens when America starts to regard them as the criminals.