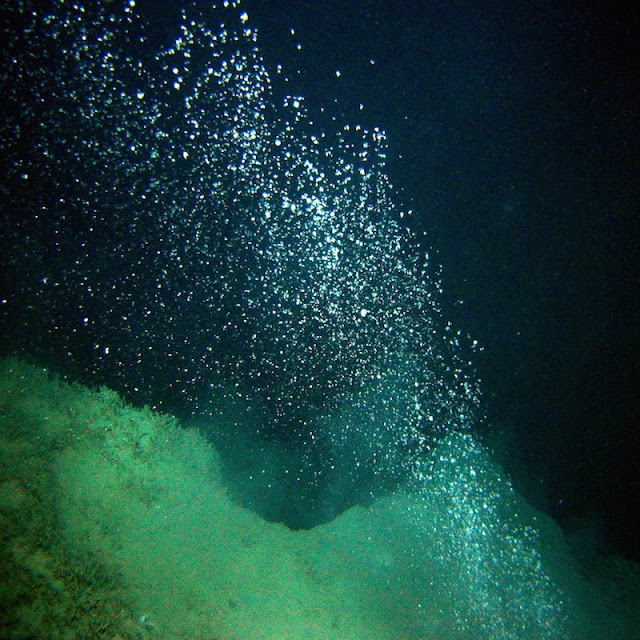 Only a squawk from a sandhill crane broke the Arctic silence — and a low gurgle of bubbles, a watery whisper of trouble repeated in countless spots around the polar world.

"On a calm day, you can see 20 or more 'seeps' out across this lake," said Canadian researcher Rob Bowen, sidling his small rubber boat up beside one of them. A tossed match would have set it ablaze.

Pure methane, gas bubbling up from underwater vents, escaping into northern skies, adds to the global-warming gases accumulating in the atmosphere. And pure methane escaping in the massive amounts known to be locked in the Arctic permafrost and seabed would spell a climate catastrophe.

Is such an unlocking underway?

Researchers say air temperatures here in northwest Canada, in Siberia and elsewhere in the Arctic have risen more than 2.5 C (4.5 F) since 1970 — much faster than the global average. The summer thaw is reaching deeper into frozen soil, at a rate of 4 centimeters (1.5 inches) a year, and a further 7 C (13 F) temperature rise is possible this century, says the authoritative, U.N.-sponsored Intergovernmental Panel on Climate Change (IPCC).

In 2007, air monitors detected a rise in methane concentrations in the atmosphere, apparently from far northern sources. Russian researchers in Siberia expressed alarm, warning of a potential surge in the powerful greenhouse gas, additional warming of several degrees, and unpredictable consequences for Earth's climate.

Others say massive seeps of methane might take centuries. But the Russian scenario is disturbing enough to have led six U.S. national laboratories last year to launch a joint investigation of rapid methane release. And IPCC Chairman Rajendra Pachauri in July asked his scientific network to focus on "abrupt, irreversible climate change" from thawing permafrost.

The data will come from teams like one led by Scott Dallimore, who with Bowen and others pitched tents here on the remote, boggy fringe of North America, 2,200 kilometers (1,400 miles) from the North Pole, to learn more about seeps in the 25,000 lakes of this vast river delta.

A "puzzle," Dallimore calls it.

"Many factors are poorly studied, so we're really doing frontier science here," the Geological Survey of Canada scientist said. "There is a very large storehouse of greenhouse gases within the permafrost, and if that storehouse of greenhouse gases is fluxing to the surface, that's important to know. And it's important to know if that flux will change with time."

Permafrost, tundra soil frozen year-round and covering almost one-fifth of Earth's land surface, runs anywhere from 50 to 600 meters (160 to 2,000 feet) deep in this region. Entombed in that freezer is carbon — plant and animal matter accumulated through millennia.

As the soil thaws, these ancient deposits finally decompose, attacked by microbes, producing carbon dioxide and — if in water — methane. Both are greenhouse gases, but methane is many times more powerful in warming the atmosphere.

Researchers led by the University of Florida's Ted Schuur last year calculated that the top 3 meters (10 feet) of permafrost alone contain more carbon than is currently in the atmosphere.

"It's safe to say the surface permafrost, 3 to 5 meters, is at risk of thawing in the next 100 years," Schuur said by telephone from an Alaska research site. "It can't stay intact."

Methane also is present in another form, as hydrates — ice-like formations deep underground and under the seabed in which methane molecules are trapped within crystals of frozen water. If warmed, the methane will escape.

Dallimore, who has long researched hydrates as energy sources, believes a breakdown of such huge undersea formations may have produced conical "hills" found offshore in the Beaufort Sea bed, some of them 40 meters (more than 100 feet) high.

With underwater robots, he detected methane gas leaking from these seabed features, which resemble the strange hills ashore here that the Inuvialuit, or Eskimos, call "pingos." And because the coastal plain is subsiding and seas are rising from warming, more permafrost is being inundated, exposed to water warmer than the air.

The methane seeps that the Canadians were studying in the Mackenzie Delta, amid grassy islands, steel-gray lakes and summertime temperatures well above freezing, are saucer-like indentations just 10 meters (30 feet) or so down on the lake bed.

The ultimate source of that gas — hydrates, decomposition or older natural gas deposits — is unclear, but Dallimore's immediate goal is quantifying the known emissions and finding the unknown.

With tent-like, instrument-laden enclosures they positioned over two seeps, each several meters (yards) wide, the researchers have determined they are emitting methane at a rate of up to 0.6 cubic meters (almost 1 cubic yard) per minute.

Even if the lake seeps are centuries old, Bowen said, the question is, "Will they be accelerated by recent changes?"

To begin answering that, Dallimore is working with German and Canadian specialists in aerial surveying, teams that will fly over swaths of Arctic terrain to detect methane "hot spots" via spectrometric imagery, instruments identifying chemicals by their signatures on the light spectrum.

Research crews are hard at work elsewhere, too, to get a handle on this possible planetary threat.

"I and others are trying to take field observations and get it scaled up to global models," said Alaska researcher Schuur. From some 400 boreholes drilled deep into the tundra worldwide, "we see historic warming of permafrost. Much of it is now around 2 below zero (28 F)," Schuur said.

A Coast Guard C-130 aircraft is overflying Alaska this summer with instruments sampling the air for methane and carbon dioxide. In parts of Alaska, scientists believe the number of "thermokarst" lakes — formed when terrain collapses over thawing permafrost and fills with meltwater — may have doubled in the past three decades. Those lakes then expand, thawing more permafrost on their edges, exposing more carbon.

Off Norway's Arctic archipelago of Svalbard last September, British scientists reported finding 250 methane plumes rising from the shallow seabed. They're probably old, scientists said, but only further research can assess whether they're stable. In March, Norwegian officials did say methane levels had risen on Svalbard.

Reporting to the European Geophysical Union last year, the scientists, affiliated with the University of Alaska and the Russian Academy of Sciences, cited "extreme" saturation of methane in surface waters and in the air above. They said up to 10% of the undersea permafrost area had melted, and it was "highly possible" that this would open the way to abrupt release of an estimated 50 billion tons of methane.

Depending on how much dissolved in the sea, that might multiply methane in the atmosphere several-fold, boosting temperatures enough to cause "catastrophic greenhouse warming," as the Russians called it. It would be self-perpetuating, melting more permafrost, emitting more methane.

Some might label that alarmism. And Stockholm University researcher Orjan Gustafsson, a partner in the Russians' field work, acknowledged that "the scientific community is quite split on how fast the permafrost can thaw."

But there's no doubt the north contains enough potential methane and carbon dioxide to cause abrupt climate change, Gustafsson said by telephone from Sweden.

Canada's pre-eminent permafrost expert, Chris Burn, has trekked to lonely locations in these high latitudes for almost three decades, meticulously chronicling the changes in the tundra.

On a stopover at the Aurora Research Institute in the Mackenzie Delta town of Inuvik, the Carleton University scientist agreed "we need many, many more field observations." But his teams have found the frozen ground warming down to about 80 meters, and he believes the world is courting disaster in failing to curb warming by curbing greenhouse emissions.

"If we lost just 1% of the carbon in permafrost today, we'd be close to a year's contributions from industrial sources," he said. "I don't think policymakers have woken up to this. It's not in their risk assessments."

How likely is a major release?

"I don't think it's a case of likelihood," he said. "I think we are playing with fire."