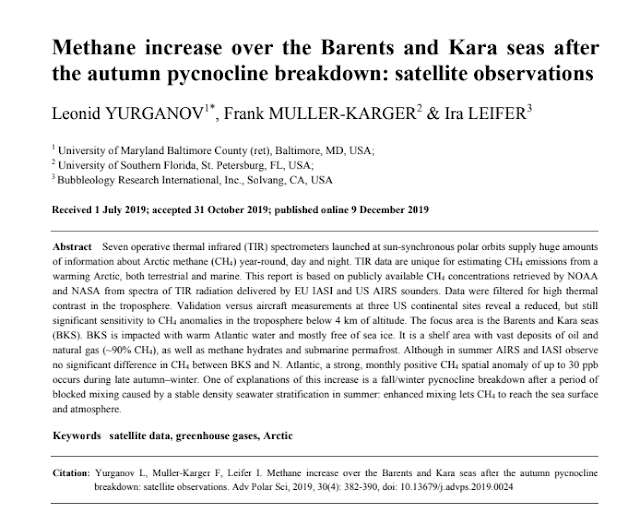 Last winter (2018) Margo and I observed that methane levels actually went UP, something that didn't make sense to either of us.  After all, in winter, there is a layer of ice that would (presumably) stop a release of methane.

A recent paper by Leonid Yurganov et. al demonstrates that satellite obervations have shown that methane emissions have been higher in winter than they are in summer. 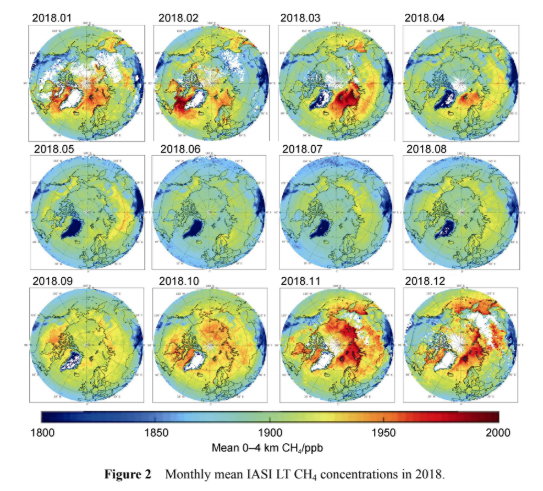 I am hugely grateful to Margo for unpacking this paper which, with its dense language and frequent abbreviations makes "incomprehensible" an understatement.
Margo explains this extremely important information that is likely to go largely unreported very clearly in the video below.

Perhaps I can explain it this way.

There is a layer in the Arctic, called the Pycnocline which prevents methane from clathrates from rising to the surface in summer. In winter the cooling surface and the warmer water coming in from the Atlantic breaks down this barrier.  This explains why methane emissions in the Kara and Laptev Seas are higher in winter than they are in summer.

You can read the paper HERE

Seven operative thermal infrared (TIR) spectrometers launched at sun-synchronous polar orbits supply huge amounts of information about Arctic methane (CH4) year-round, day and night. TIR data are unique for estimating CH4 emissions from a warming Arctic, both terrestrial and marine. This report is based on publicly available CH4 concentrations retrieved by NOAA and NASA from spectra of TIR radiation delivered by EU IASI and US AIRS sounders. Data were filtered for high thermalcontrast in the troposphere. Validation versus aircraft measurements at three US continental sites reveal a reduced, but still significant sensitivity to CH4 anomalies in the troposphere below 4 km of altitude. The focus area is the Barents and Kara seas (BKS). BKS is impacted with warm Atlantic water and mostly free of sea ice. It is a shelf area with vast deposits of oil andnatural gas (~90% CH4), as well as methane hydrates and submarine permafrost. Although in summer AIRS and IASI observe no significant difference in CH4 between BKS and N. Atlantic, a strong, monthly positive CH4 spatial anomaly of up to 30 ppboccurs during late autumn–winter. One of explanations of this increase is a fall/winter pycnocline breakdown after a period ofblocked mixing caused by a stable density seawater stratification in summer: enhanced mixing lets CH4 to reach the sea surface and atmosphere.

The Arctic has experienced the fastest warming on Earth over recent decades, termed Arctic amplification, with the Arctic Ocean warming at nearly double the rate of the world’s oceans (Hoegh-Guldberg and Bruno, 2010). Due to Arctic warming, there is concern that the vast stores of the important greenhouse gas methane (CH4) in hydrates, permafrost, and other vulnerable reservoirs can be released to the atmosphere. The radiative impact of CH4 is second after carbon dioxide on century timescales, and larger on decadal timescales (Solomon et al., 2007). Warm Atlantic currents make the Barents and Kara seas (BKS) climatically important with respect to instability of seabed CH4 due to the input of warming seawater. The Barents Sea is a shallow-shelf sea (average depth 230 m) with depressions to 400 m. It currently is close to ice-free year-round (Onarheim and Årthun, 2017). The Kara Sea is even shallower (average depth 100 m) and ice-free in summer.

The BKS has extensive proven oil and natural gas deposits,the latter of which are primarily CH4 (Shipilov and Murzin,2002). Although rather limited, existing data show these reservoirs drive CH4 seepage into the water column (Chand et al., 2014; Platt et al., 2018). At depths greater than 250 mCH4 forms hydrates that are stable in the cold BKS deep waters (~1 ). Additional seabed CH °C 4 is sequestered in the Kara Sea and the South Barents Sea as submarine permafrost (Osterkamp, 2010). Warming seabed water may destabilize submarine permafrost and hydrates, although specific mechanisms and timescales are uncertain.

Most seep bubble CH4 dissolves in process of ebullition in deep water where methanotrophic bacteriaoxidize it on weeks’ to years’ timescales (Reeburgh, 2007).  Only a small fraction of the seep bubble methane directly reaches the air. The seasonal summer pycnocline prevents vertical turbulent diffusion of methane, with concentrations near the seafloor that may be extremely high (Gentz et al.,2014). They studied dissolved CH4 concentrations to the West of Prins Karls Forland (Svalbard) in August 2010 (not in winter) and found that CH4 bubble plumes dissolved below the pycnocline and were not vertically mixing to the upper water column. They suggested that during winter in high latitudes after the summer stratification breaks down, vertical transport of CH4 from the bottom layer is not limited anymore, and CH4 can reach the sea surface. The most comprehensive CH4 measurements at the seafloor and in the atmosphere in the region were collected to the West of Svalbard in June–July, 2014, by Myhre et al. (2016).

They found that summer CH4 release from seabed sediments substantially increases CH4 concentrations above the seafloor with a sharp decrease above the pycnocline. They suggest that dissolved methane captured below the pycnocline may only be released to the atmosphere when physical processes remove the pycnocline as a dynamic barrier. Mau et al. (2017) field measurements between Svalbard and Bear Island in August–September, 2015, also demonstrated the pycnocline as a barrier for CH4. All three investigations came to a conclusion on insignificant methane flux in summer-early autumn around Svalbard and between Svalbard and Bear Island. Meanwhile, as it is well known (Rudels, 1993), during winter in high latitudes convective mixing extends to the seafloor. Currently, this seasonality ofpotential CH4 pathways has not been considered in CH4 budgets (Fisher et al., 2011; AMAP, 2015). To our best knowledge, direct measurements of CH4 flux in winter have not been published for the BKS to date. Summertime CH4 emission density near Svalbard was estimated by Myhre et al. (2016) as 0.04 nmol·m−2·s−1 . Formal extrapolation onto the whole year and total area of BKS (2.317×109 km2) results in0.047 Tg CH4·a−1, i.e. negligible flux.

Shakhova et al. (2010) investigated summer and winter methane flux from the East Siberian Arctic Shelf (ESAS) encompassing the Laptev, East Siberian seas, and Russian part of the Chuckchi Sea. More than 5000 at-sea measurements of dissolved methane have been collected. Greater than 80% of ESAS bottom waters and greater than 50% of surface waters were supersaturated with methane regarding to the atmosphere. In summer diffusive and ebullition fluxes were estimated, respectively, as 1.24 Tg CH4 and 1.68 Tg CH4 (total summer 2.92 Tg CH4), in winter 3.23 Tg CH4 and 4.49 Tg CH4 (total winter 7.72 Tg CH4), totally 10.64 Tg CH4·a−1

An assessment by Berchetet al. (2016) based on surface NOAA network and inverse modeling is significantly lower: 0.5–4.3 Tg CH4·a− . Satellite observations are extremely useful for characterization of Arctic CH4, especially over open sea, due to their continuous and global data record. Thermal infrared (TIR) CH4 data are available globally, day and night, whereas SWIR
CH4 instruments are ineffective in the Arctic due to low or no sunlight, low reflectivity from water and ice, and long atmospheric optical path (Leifer et al., 2012). TIR orbital sensors include AIRS/Aqua, IASI/MetOp-A, B, C, CrIS/NPP,CrIS/NOAA-20, and GOSAT/TANSO-TIR (see a list of abbreviations at the end of the article). Example current SWIR sensors are TROPOMI and GOSAT-SWIR. CH4 retrievals for AIRS and IASI are publicly available (see links in Section 2.1). Yurganov et al. (2016) suggested a filtering technique for the Arctic data and presented data on seasonal, spacial and interannual variability of methane in the layer below 4 km.
They concluded, “Seasonal increase in methane has been observed since late October–early November. This can be associated with the beginning of vertical convection in the ocean, caused by the cooling of the surface layers and the simultaneous increase in temperature of the underlying water layers. Bottom layers saturated with methane are brought to the surface” (translated from Russian). Preliminarily, Yurganov et al. (2016) assessed the annual emission of methane from the Arctic Ocean in 2010–2014 as ~2/3 of land emission to the North from 60°N. Arctic terrestrial emission is now estimated as 20–30 Tg·a−1 (AMAP, 2015). Therefore, total marine CH4 flux from the Arctic can be expected in the range 15–20 Tg CH4·a−1 (without the Sea of Okhotsk). The most recent analysis ofavailable measurements of the global methane flux from oceans (Weber at al., 2019) by training machine-learning models gave much lower oceanic flux (6–12 Tg CH4·a−1).
However, their conclusion that very shallow coastal waters contribute around 50% of the total methane emissions from the ocean agrees with our data for the Arctic (see below, Section 3). Here we show that CH4 spatial anomaly (SA) over BKS is seasonally growing together with the Mixed Layer Depth (MLD). Therefore, an increase of emission in winter, predicted by Gentz et al. (2013) and Myhre et al. (2016) agrees with remote sensing data and seasonal cycle of MLD. However, this agreement does not exclude other explanations of the effect and a confirmation of a significant wintertime flux from Arctic seas by direct measurements is necessary.After that it may be included into the methane bud

Satellite measurements of CH4 concentration in the lower 4 km of the troposphere reveal a significant, up to 30 ppb, monthly anomaly referenced to North Atlantic maximized in November–December–January over vast areas of BKS, as well as a part of the Greenland Sea. Satellite observations. Arctic methane: satellite data 389 show similar, but less pronounced, anomalies in
autumn–winter over other Arctic seas (Yurganov et al., 2016; Yurganov and Leifer, 2016a). This CH4 anomaly may be interpreted as intensification of CH4 flux induced by turbulent diffusion and/or convection after a breakdown of
the summer stratification. After a confirmation of a significant wintertime flux from Arctic seas by direct measurements the marine CH4 emission may be included into the methane budget.
Posted by seemorerocks at 19:04