I am no raging right-winger but we are living in absolutely insane times that can only be compared to the 1930's in Stalinist USSR - the only difference is that people are not taken down into the basement to be shot.

in US Aid to Ukraine;

Laundered it to themselves.

Trying to Impeach Trump to 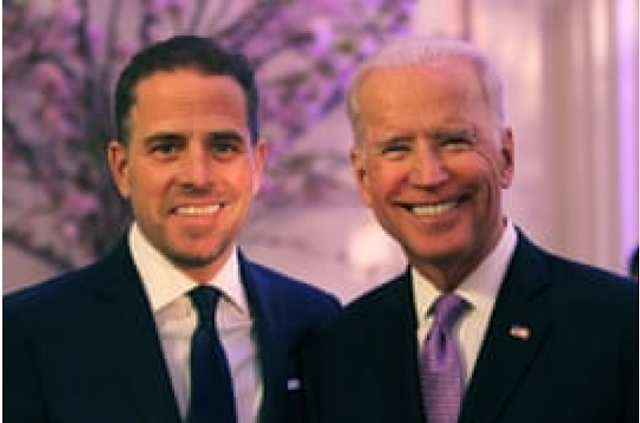 BILLIONS of Dollars of U.S.foreign aid and loans from the International Monetary Fund (IMF) [which were Guaranteed by the U.S.] were STOLEN in Ukraine and laundered back to DEMOCRATS in the US during the Obama administration.  Now, the Democrats are trying to Impeach President Trump -on utterly false charge - to stop the investigation into their crimes!

Worse, the people screaming the loudest about Trump are the ones who got most of the illicit money, including Hillary Clinton - whose campaign was allegedly given about $10 Million IN CASH FROM UKRAINE prior to the 2016 election, and Andrew Weisman, Chief of the US Justice Department's FRAUD UNIT, who leaked that witnesses from Ukraine wanted to come to the US to testify about the corruption. Those leaks allowed former Vice President Biden to find out trouble was coming and personally intervene to have cancelled, the witness Visa's . . . thus preventing them from coming to the US.

We begin with Alexandr Onyshchenko a former Member of Parliament (MP) in Ukraine.   Mr. Onyshchenko  spoke with media outlets from a hospital room in Germany and laid out what actually happened with the Bidens and Burisma, the Ukrainian natural gas group of companies where Hunter Biden was paid millions to sit on the board while having no experience in the industry.

“In 2015, Burisma was considered a corrupt company by the US Government, but a very lucrative and powerful one. Former Ukrainian President Poroshenko was trying to ‘get in’ and get a piece of the action. No one would mess with Burisma with the U.S. Vice President involved. Zlochevsky, an Oligarch who owns/controls Burisma, showed everyone Biden was on the board pushing his father’s name. The problem with the ‘corrupted company’ label in the United States went away quickly in about three months once Biden got on the Burisma Board of Directors. It was amazing."

Onyshchenko also said “And of course, Burisma also helped the Clinton campaign prior to the election.”

How did they help we asked?

Wouldn’t those wire transfers show up? we questioned.

“This was Ukraine; everything was done with big bags of cash to the Clintons.”
Onyshchenko then went on to describe how he was approached by prosecutors in the U.S. to testify in the United States on American corruption in Ukraine.

He showed a letter published below from the Department of Justice in 2016, where he says they provided him a temporary visa to come testify on the theft and money laundering of American aid to Ukraine, and on the illegal money to the Clintons. 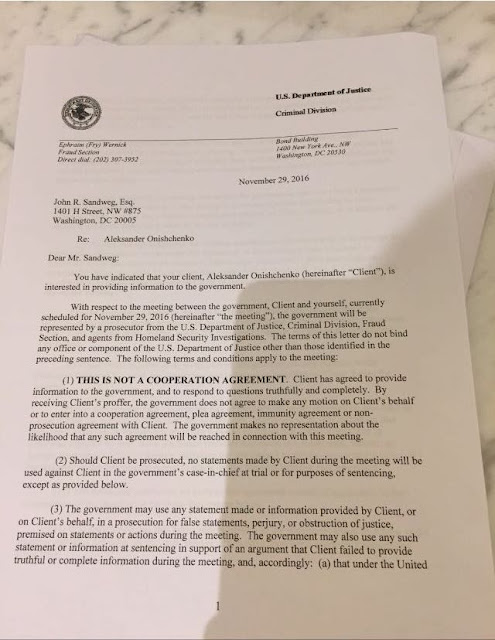 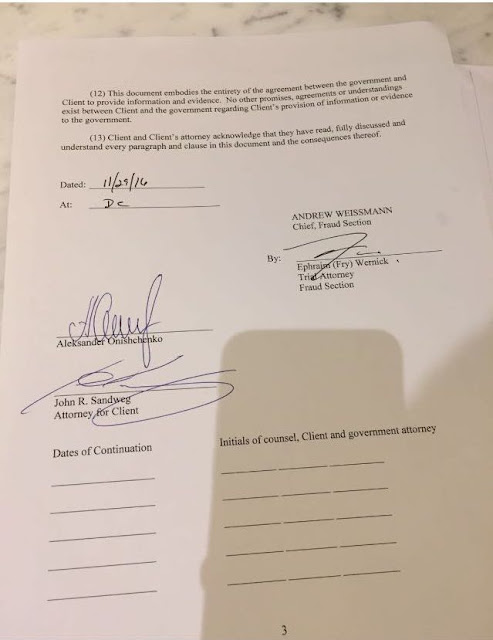 “Right before I was to leave for the U.S., I received notice that my visa had been cancelled due to the personal involvement of Vice President Joe Biden. He made a personal phone call and the visa was cancelled. I guess he didn’t want me telling what I know so I didn’t make it to the United States to testify.” The cancellation of the visa has been confirmed by a secondary source.

According to Onyshchenko, it was customary for twenty percent (20%) of US foreign Aid, to be siphoned-off and kicked-back to US officials!  So for $1 Billion in US Aid (or loan guarantees), $200 Million had to be covertly given back to US officials in illegal bribes/kickbacks.

The officials who got those hundreds of millions in kickbacks . . . appear to be American Democrats; the very people now moving to impeach President Trump on false pretenses.

The claims by the former MP of the Ukraine Parliament seem to be corroborated by investigations run by former US Attorney and New York City Mayor, Rudy Giuliani.

Rudy Giuliani ✔@RudyGiuliani
Replying to @RudyGiuliani
Dem’s impeachment for innocent conduct is intended to obstruct the below investigations of Obama-era corruption:

33.5K people are talking about this

HAL TURNER REMARK: Tomorrow, Wednesday, December 18, it is likely the US House of Representatives will formally vote to Impeach President Trump. As you watch who votes in favor of Impeachment, bear in mind that the people screaming the loudest about Trump are the most guilty in the unfolding Ukrainian bribery/kickback scheme. They are trying to oust OUR President to obstruct the investigation into THEIR crimes.