The true face of the Democrats: Trump's letter

The comments of the Saker reflect my own position completely. 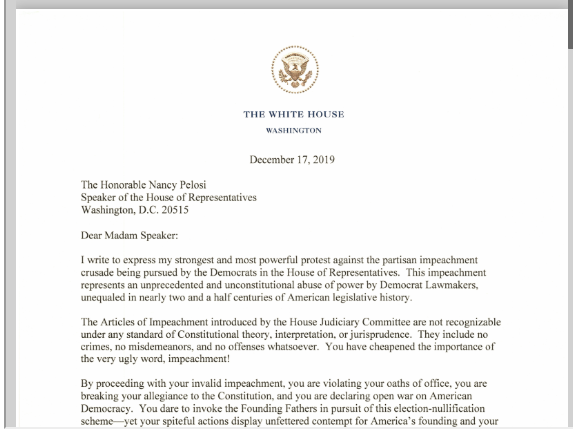 Saker commentary: this is not about picking sides, the enemy of my enemy is NOT my friend. However, as Malcolm X once said, “I am for the truth no matter who tells it”. There are lies in this text, beginning with entire section about how great the US is doing. As for the segment about Israel, I just wonder what color Trump’s tongue is by now. Whatever color, it is kosher for sure.

But that is not the point.

It is in his accusations against Pelosi, Schiff and the rest of them that Trump is 100% right. And that is much more important than his bombastic flag-waving and lies. Besides, he clearly did not write this text anyway, it is way too good and he is way too stupid. But I am pretty sure that he carefully read it and approved it. So this is not only an official document, it is a historical one!

Request to all: if you see any US media posting the full letter, please let me know in the comments section. I have not listened to the US media in years, and I don’t want to, so I really don’t know. And in this case, I really would like to know who many US media outlets have refused to post the full text of such an important statement by the US President

Circulate this letter amongst your friends and contacts! It is crucial to show the true face of these Dems (not including Tulsi Gabbard) and to prevent them from succeeding. They are the only party right now whose arrival to power could signal a possible war between Russia and the US. We all have to do all we can to prevent that.

Still, my personal prediction is that the Dems are committing suicide with this entire impeachment business. But let’s not be naive, there are almost as many deep-staters and Neocons in the GOP as there are in the Dem party. So please resist the temptation of saying that one is better than the other. They are different, yes. But one is not better than the other.

The enemy is not one person, or any party. It is the entire system which is both demonic and unreformable.

That is our real enemy.

Always keep that in mind.