Is Australia being dried out

Right now I am feeling for our Australian cousins and everything that is going on over there.  I wish to add to the article I posted yesterday on the Australian bushfires.

Reflections on clouds obscuring the sun and the Australian bushfires

We get fed articles which reports on the fires in a not entirely satisfactory way and are designed to create an impression.

There are, however, other aspects to this that appear in the media but as isolated items without any context.

It is my wish to provide a report which reflects the more complicated picture and may join some dots which badly need joining.

This is the latest coming out from Australia.  There is no doubt the seriousness of the situation. 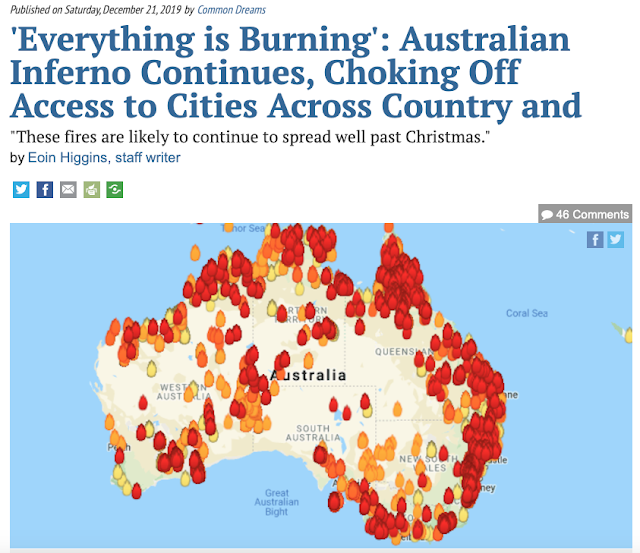 https://www.commondreams.org/news/2019/12/21/everything-burning-australian-inferno-continues-choking-access-cities-across-country
Essentially it seems that all roads out of Sydney are closed except for two.

Max Igan, in his last two videos, has presented a lot of material relating to this situation for which I am deeply grateful even if I am not quite in line with his conclusions and certitude.

Max is quite sure that the drought and the fires have nothing to do with anthropogenic climate change (which they do in my considered opinion).

I really like personal anecdote which in my opinion is worth as much as anything from people sitting in front of a computer.

He notes that the creeks on his Queensland property are all dried out. People assume they will fill up with the next rain but as he points out, they are fed by aquifers.

But the aquifers are drying up.

But let me take a step back and take a look at the response to the fires. At a time when his country is on fire and the population needing someone to stand with them, PM Scott Morrison decides it is the right thing to take off on a holiday in Hawaii.

However, before he did so he rejected calls for more help for the overstretched fire fighters saying they "wanted to be there" 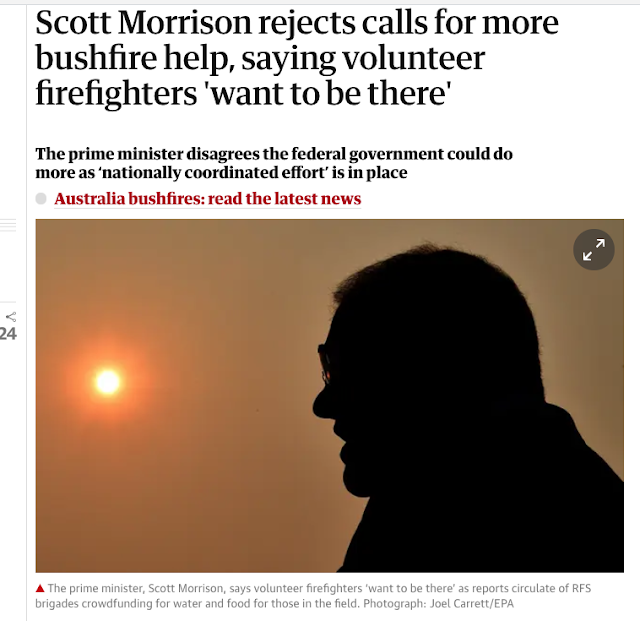 Did he mean these people?

Not before NSW premier, Gladys Berejiklian slashed fire service budget as the fires were raging - the rural one by 75%! 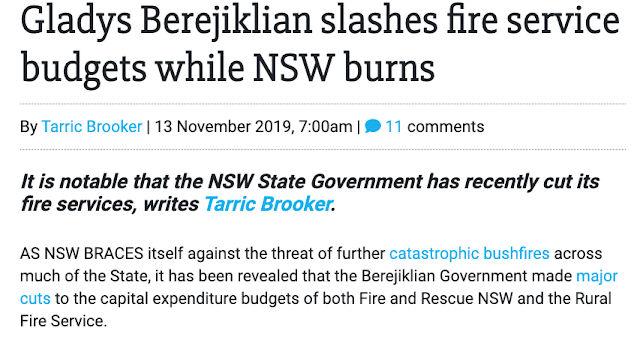 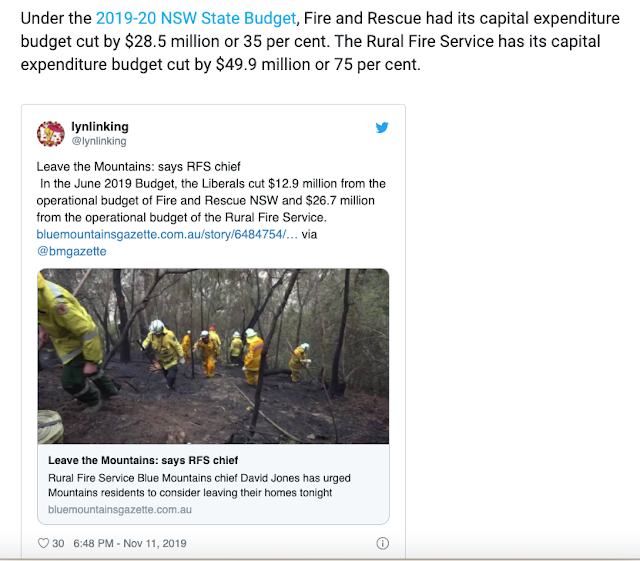 Max Igan makes a strong case that Australia is being dried out as its water is being squandered.

This does not really make it into the public discourse and certainly not discussed in relationship to the current fires.

Let's have a look, first, at the all-important Murray-Darling Basin. 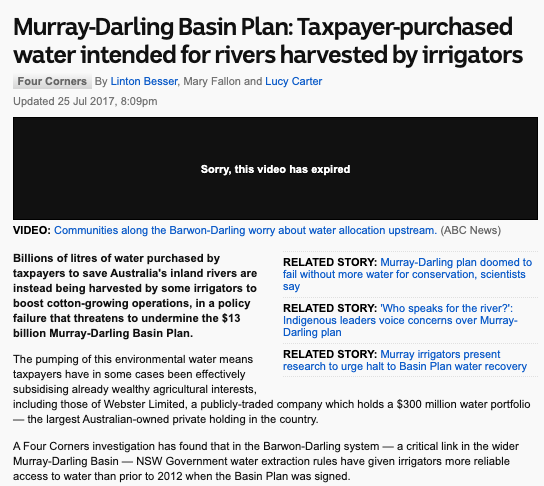 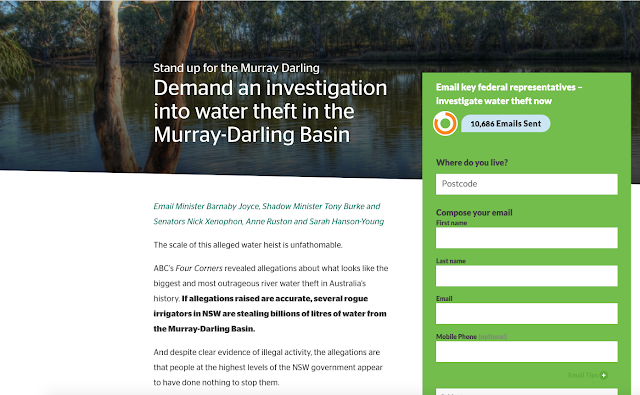 
There are many examples of Australia selling off water rights as if they had all the water in the world.  Here are two examples. 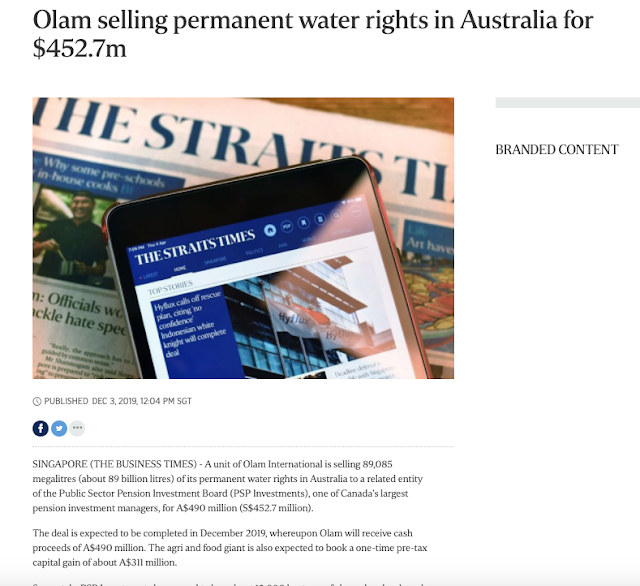 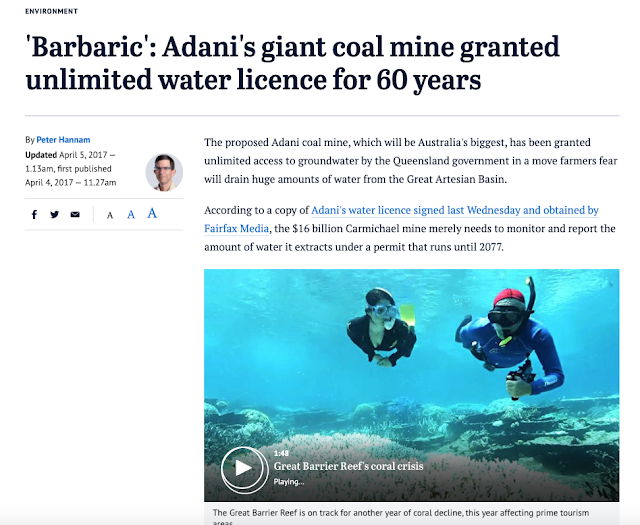 And then there is China: 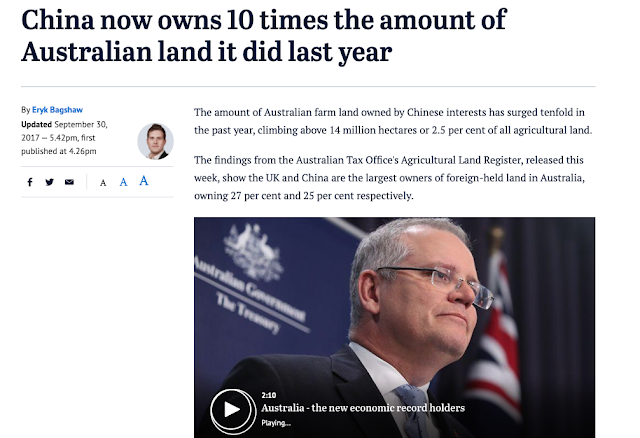 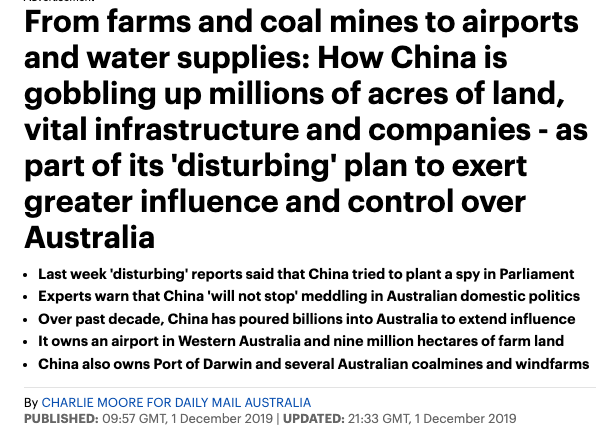 
PRIVATE DAMS THAT DO NOT BELONG TO THE AUSTRALIAN PEOPLE


This article is saying that at least 20 to 30 large private dams have been constructed in the Murray-Darling basin in recent years.

None of that is going to the farmers or the people of Australia who need it. 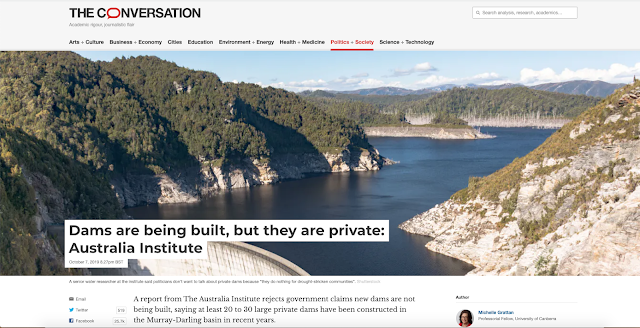 A report from The Australia Institute rejects government claims new dams are not being built, saying at least 20 to 30 large private dams have been constructed in the Murray-Darling basin in recent years…..

“Over $200 million was spent on dam-related projects [in the Murray-Darling Basin] according to official data, although not all of this will have been specifically on dams,” it says,

Maryanne Slattery, senior water researcher at the institute, said politicians don’t want to talk about these dams because “they do nothing for drought-stricken communities, the health of the river or struggling farmers”.

“These dams have been built on private land and are for the exclusive use of corporate agribusiness, such as Webster Limited,” she said..

STEALING THE WATER FOR FRACKING

In his video Max Igan shows fracking wells in Great Artesian Basin where the water catchment areas are. 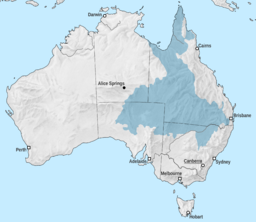 He demonstrates just how many fracking wells there are in this area which is the origin of much of the country's artesian water.

These are on the Nullabor Plain as well as in Western Australia.

Max Igan contends that this is what the private dams are being used for.

SO, WHAT DOES THIS MEAN FOR AUSTRALIANS?

So while water rights are being sold to other countries and overseas companies how does it look for Australians? 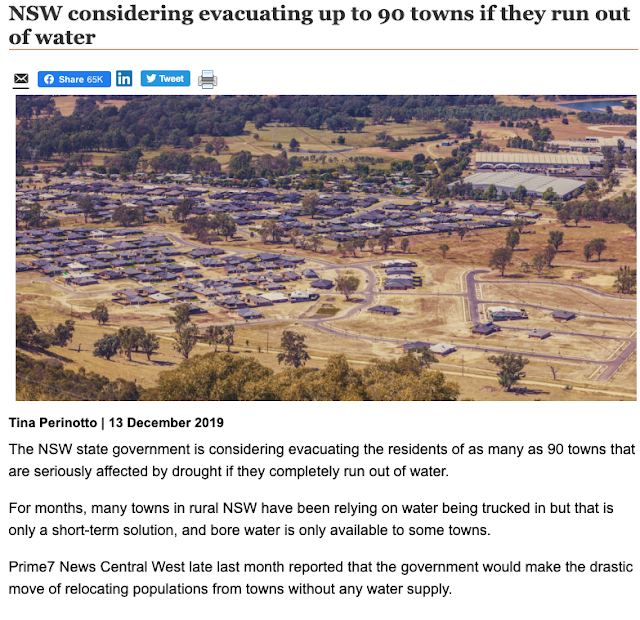 And how much of this is truly about fighting climate change and how much about controlling the population? 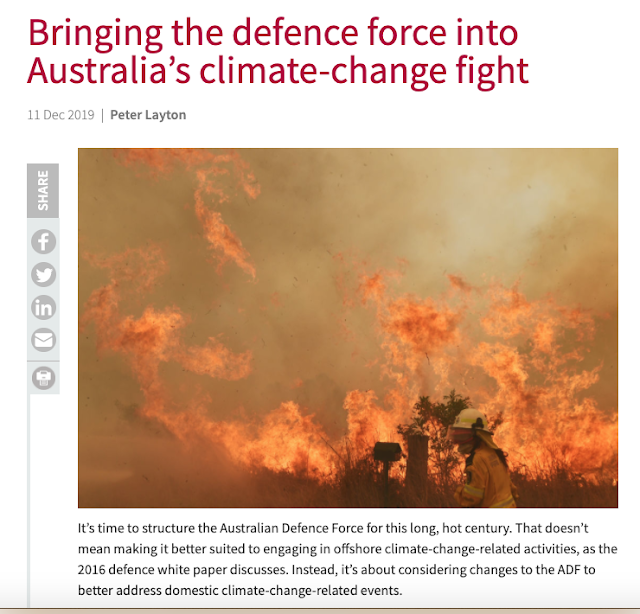 
Here is another report on water corruption:

WHAT ABOUT A DEPOPULATION AGENDA?


There is always that hoary chestnut over whether all this is by design or by cock-up or just the way things are as ecological, economic, energy collapse advances more and more quickly.

I am not inclined to accept arguments of  "climate change fraud" or Agenda 21 so easily.

However, this was interesting.  Igan cited what has been described as "a highly-regarded intelligence organisation" that predicts a reduction in population in the coming years. 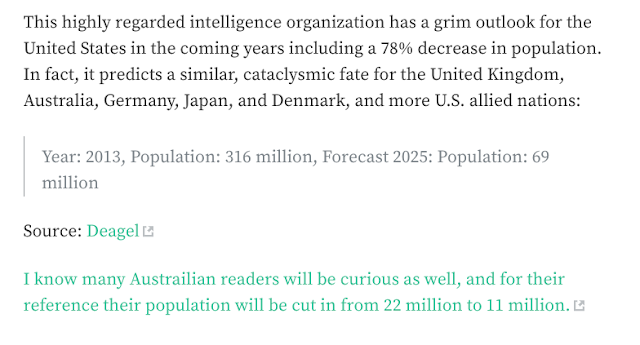 According to this Australia ranks 13th with a population of 23 million. 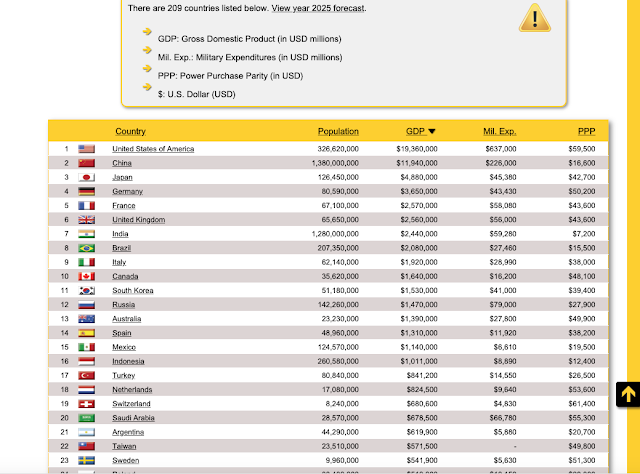 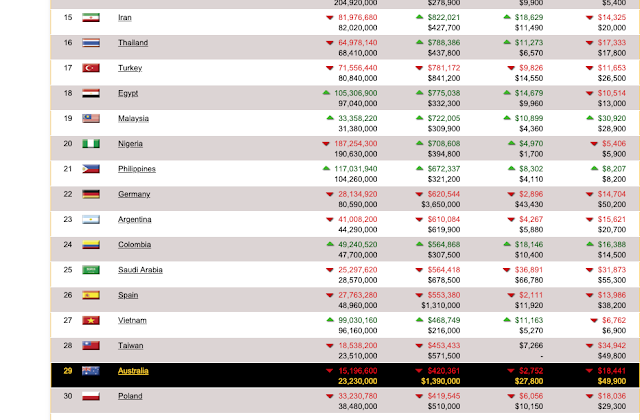 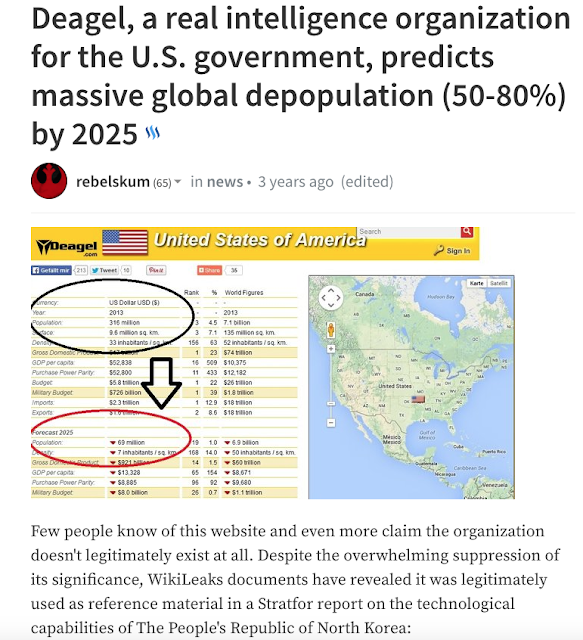 There is more than enough evidence to demonstrate that Australia's valuable water resources that are already in short supply are being ripped off to supply mining and fracking companies with as much water as they want.  The Murray-Darling Basin that takes up the country's best agricultural and horticultural land is being deprived of water while agricultural concerns upstream steal the water for themselves.

Meanwhile, the response to all this, and to the fires, defies belief.

According to anecdote the authorities are coming through areas that have been devastated by fire and cutting down the surviving trees on the pretext they are "a fire hazard".

All the while reportedly there have been no burn-offs to get rid of further fuel for the fires in some years.

Speaking for myself, it is clear that Australia truly is ground zero for climate change.  Meanwhile, what could be described as "sparkler dust" (aluminium, strontium sprayed from aircraft) is providing fuel for the fires, allowing them to burn at temperatures far higher than anything that has been seen before. 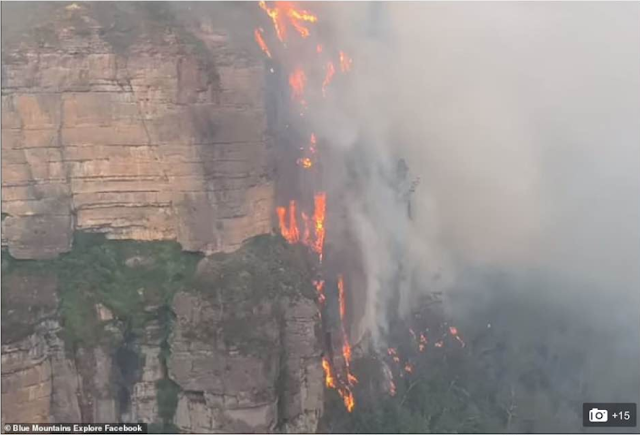 So too, it is clear that there are other human factors at play that are making a catastrophic situation even worse (if that can be imagined).

it can be reasonably concluded that the government is selling off the water and quite possibly has a policy of forcing people from the country into the cities (imagine what that would be like!)

However, I am not going to jump to any conclusions other than to say that things are much more complicated, and much worse, than any of us are led to believe.

Finally, here is a video from GeogengineeringWatch.org: