Towards the demise of rural Australia?

down towns to mine 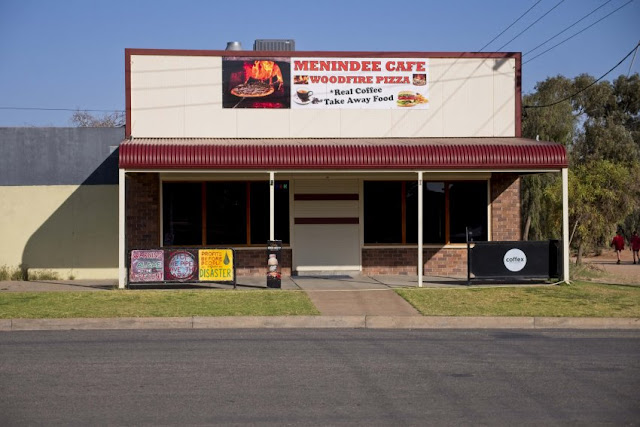 “It seems that towns in western New South Wales are being shut down and nobody is listening,” local resident Mark Merritt told Green Left Weekly on the banks of a non-existent river.

Together with Susie Peake and Cath Eaglesham from Earthling Studios, Merritt attended an event organised on the Baaka River (the local Aboriginal name for the Darling River) as part of the Yaama Ngunna Baaka Corroborree Festival tour held between September 29 and October 4.

NSW rivers crisis: A ‘perfect storm’ of drought, theft and corruption
Rivers in crisis: Redesigning river systems for profits
The tour was organised by Uncle Bruce Shillingsworth to expose the state of the Baaka.
Broken Hill’s water has always come from the Menindee Lakes, a gigantic lake system in the middle of a semi-arid desert that contains water bodies more than 15 kilometres wide.
In 1949, infrastructure works modified the lakes to act as huge water storages to mitigate flooding and hold water supplies for South Australia. A more than 30-kilometre long levy was built along the eastern bank of the Baaka to form a human-made lake, named Lake Wetherell, as an additional water storage to supply the townships of Menindee, Sunset Strip and Broken Hill.
In the past 60 years Broken Hill has never run out of water.

Then, at a cost of more than $500 million, the state government rammed through a pipeline project to take water from the already struggling Murray River near Wentworth, on the border of NSW and Victoria, and pump it uphill for 270 kilometres to Broken Hill.
There was no tender for the construction of the new pipeline; it was simply signed off by then-premier Mike Baird. Broken Hill Mayor Darriea Turley tried in vain to see the business plan for the pipeline but was blocked by successive water ministers. The government was finally force to release it in June.
No doubt someone has made a fortune out of the construction of the pipeline, which runs through old-growth desert vegetation and sacred Aboriginal sites. The pipeline is also set to supply water to two new mine sites.
People in the towns of Menindee, Sunset Strip, Wilcannia, Tilpa and Louth are now reliant on bottled water. They are surviving largely due to donations from people in Victoria, NSW and South Australia.
Meanwhile, the state government continues to ignore the plight of the people in Menindee, who have to deal with putrid water that the water authority has declared fit for consumption.
Menindee used to have a population of 1200 residents and a casual population of another 500 during the grape and fruit picking seasons. People in Menindee had full employment because of the horticultural and tourist industry.
Now there are only about 500 permanent residents and zero casual workers. People are forced to leave as the jobs dry up along with the river and lakebeds.
Some say it is all part of a long-term plan to depopulate the Lower Darling and Menindee Lakes and clear the way for rare earth mineral extraction.

On the last night of the bus tour, participants camped in Menindee, on the banks of Lake Pamamaroo. Locals use to refer to the Menindee Lakes system as “Mini-Kakadu”, with its more than 100 species of birds and rich vegetation.
Broken Hill shire is attempting to have the entire lake system listed under the Ramsar Convention on wetlands and protected as an important and vital bird habitat.
Today, the water is gone and the river red gums are struggling to stay alive as the salt and the lack of river-flows take its toll. This is all due to the over allocation of pumping licences in the upper Baaka catchment, mostly for cotton.
About 8 years ago, Merritt was organising tours to Lake Mungo, working out of Wentworth.
One evening he noticed the river flowing backwards, upstream, as irrigation pumps were switched on for the nightly watering of nearby orchards and vineyards.
Confused, he asked about the situation and was told: “That’s the way it is, when the pumps go on the river goes in reverse.”  It was at that point he knew something was dreadfully wrong with water management in NSW.
Merritt started talking to people and travelled to Menindee to start compiling interviews. Merritt, Eaglesham, Peake and Sally Hook have worked relentlessly as Earthling Studios to get voices from western NSW heard.
Merritt said: “It is ordinary people we need to make aware that fresh water is largely controlled by the big banks and multinational water merchants.
“These merchants and their marketing processes are pricing Australian irrigators out of the water market, allowing global capital interests to determine what will happen to our inland waters and waterways.
“In the twenty years since the beginning of water-trading we have gone from a country that shared our water, a common and vital resource, to one where capitalists are deliberately diverting entire river systems to make fast bucks.
“They are polluting our waterways too. Our independent water analysis has shown that the entire Baaka is thick with farm chemical runoff, mainly in the form of salts (probably Glyphosate residue), sulphur and phosphorus. It is these chemicals that are likely to be the real cause of the cyno-bacterial blooms known as blue-green algae outbreaks.
“Our once beautiful river is now a stream of bacteria, thanks to unbridled capitalism, chemical companies and politicians that can’t see the living world, because of the dollars obstructing their view.
“The people along the Baaka have been crying out for help for decades. They have been ignored by just about everyone until the fish kill in the Menindee weir pool alerted the world to the catastrophe occurring there.”

The state government has drained the Menindee Lakes twice in a three-year period. Meanwhile, a company has been drilling for rare earth metals in the dry bed of Lake Menindee.
There has been an explosion in demand for rare earth metals as they are used in numerous everyday gadgets and items such as computers, DVDs, batteries, mobile phones, catalytic converters, magnets and fluorescent lighting.
Recently, after the lake was mysteriously drained during a flood on the Murray, some 43 holes were drilled in the bed of the Menindee Lakes, with core samples put in refrigerated chests and flown out by helicopter.
The company told locals and workers they were drilling to find water but locals know there is no water there worth having because this had already been tried.
“This seems to have been a long-term conspiracy of mining companies and government for years, decades,” Merritt said. “It’s like they want to get rid of people and communities downstream of Bourke.
“Killing the river would be a good way to do that.”
“There is clearly an unstated intention by our governments to mislead the public, destroy regions and the towns, impact the health and lifespans of Australians, and cause social, ecological and geological collapse, just to allow mining and irrigation corporations to increase their profits.
“In my opinion everyone involved in this obviously detrimental and destructive conspiracy ought to be charged in our federal courts for misleading the public, treason, ecocide and bastardry of the highest order,” Merritt said.
[The interview Merritt collected can be found on the Earthling Studio website thevanishingriver.com.au.]