told to evacuate in Victoria 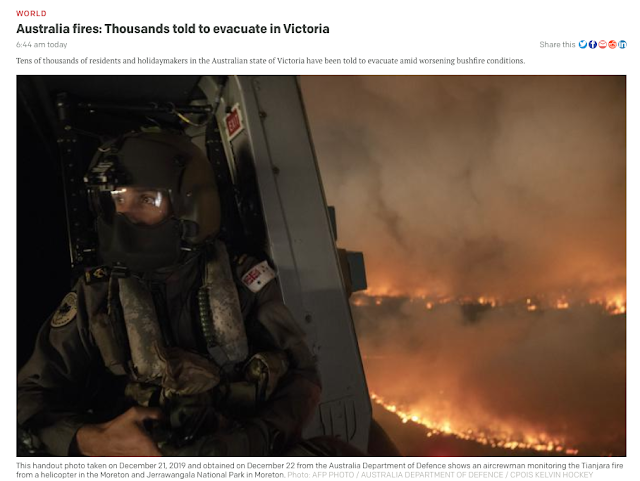 Temperatures of over 40C, strong winds, thunderstorms and a change of wind direction meant Monday would be a day of extreme danger, officials said.

Emergencies chief Andrew Crisp said those in the East Gippsland area should leave no later than Monday morning.

More than 100 fires are continuing to burn across Australia.

The biggest are raging near the city of Sydney in New South Wales, where more than a quarter of a million people have signed a petition calling for the New Year's Eve fireworks to be cancelled and the money spent on fighting fires.

What are the risks in Victoria?
In East Gippsland, three fires burning near the towns of Bruthen, Buchan and Bonang were forecast to grow significantly.

Officials said they could burn towards the coast, potentially crossing and cutting off the region's main road.

An estimated 30,000 people are currently holidaying in the threatened area, according to ABC News.

Crisp, Victoria's state emergency management commissioner, said anyone in the area to the east of Bairnsdale - about 280km east of Melbourne - should move.

"What we are saying now, based on the conditions that will be confronting us tomorrow across the state, but in particular in East Gippsland, is that if you're holidaying in that part of the state, it's time that you left," he said.

It was no longer possible to provide assistance to all the visitors in the East Gippsland region, emergency authorities said. 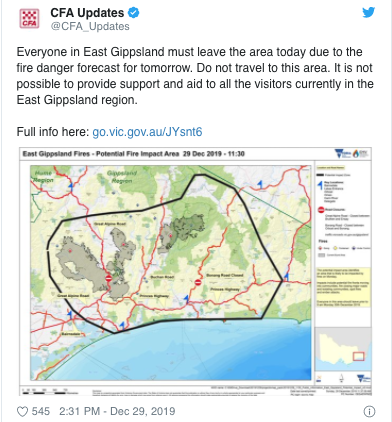 Extreme fire warnings were in place across most of Victoria. Any lightning strikes in dry, drought-affected forests had the potential to quickly become fires that threaten lives and homes, officials said.

A major music festival in the state has also been cancelled, with organisers saying it was too dangerous for the popular Falls New Year's Eve festival in Lorne, about 140km south-west of Melbourne, to go ahead.

Some 9,000 people were already camping on the festival site, which is accessed by a single track, meaning that it would not be possible for festivalgoers to evacuate quickly in an emergency.

"We are gutted to make this call but the safety of our patrons, artists and staff is our main priority," said organiser Jessica Ducrou.

What about New South Wales?

Temperatures are also expected to pass 40C in other bushfire-affected states including New South Wales and South Australia.

New South Wales is the worst-affected state, with nearly 100 fires burning. Conditions there were expected to worsen into Tuesday.

"We've got some deteriorating weather conditions over the coming days, particularly Monday and worsening through to Tuesday," said the NSW Rural Fire Service Commissioner, Shane Fitzsimmons.

The town of Balmoral, south-west of Sydney, was largely destroyed on 22 December and major roads south of the city have been closed.

On Saturday Prime Minister Scott Morrison announced that volunteer firefighters in New South Wales would get compensation for loss of earnings after spending time away from jobs to battle bushfires.

The fires have destroyed 4m hectares (9.9m acres) in five states since September. At least eight deaths have been linked to the fires. 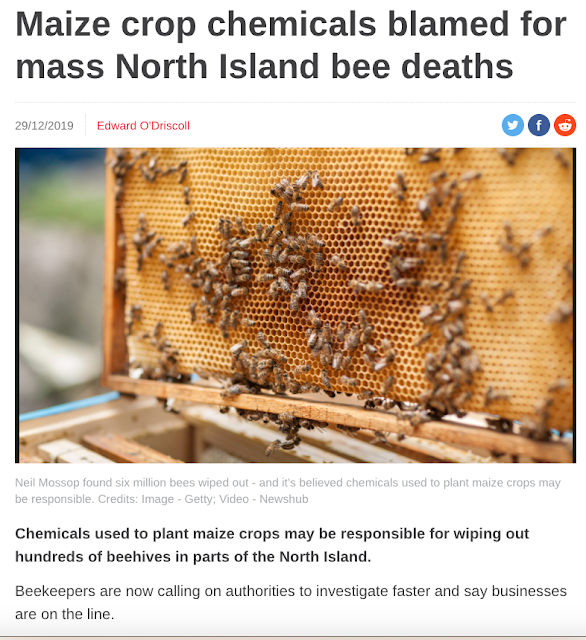 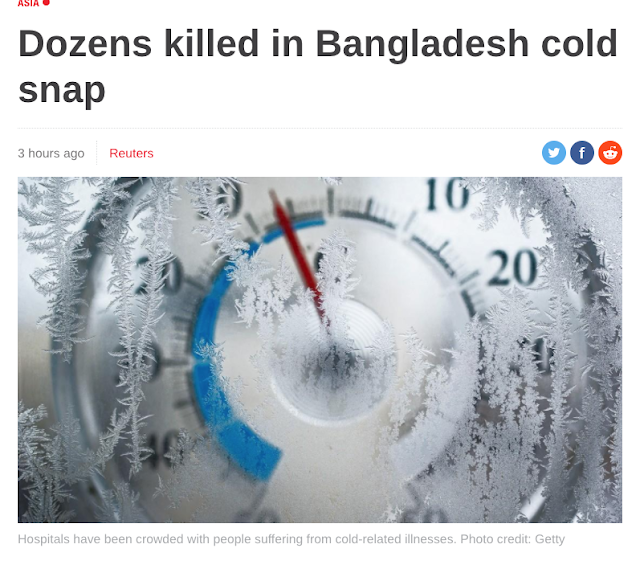 At least 50 people have died in Bangladesh as cold weather continues to sweep across the country, officials say.

The country's lowest temperature this year was recorded at 4.5C early on Sunday in Tetulia, a border town in Bangladesh's north, the weather office said.

At least 17 people died of acute respiratory infection and 33 from diarrhoea caused by rotavirus and other diseases across Bangladesh from November 1 to December 28, said Ayesha Akhter, a senior official of the government's health directorate.

Hospitals have been crowded with people suffering from cold-related illnesses, such as influenza, dehydration and pneumonia, she said 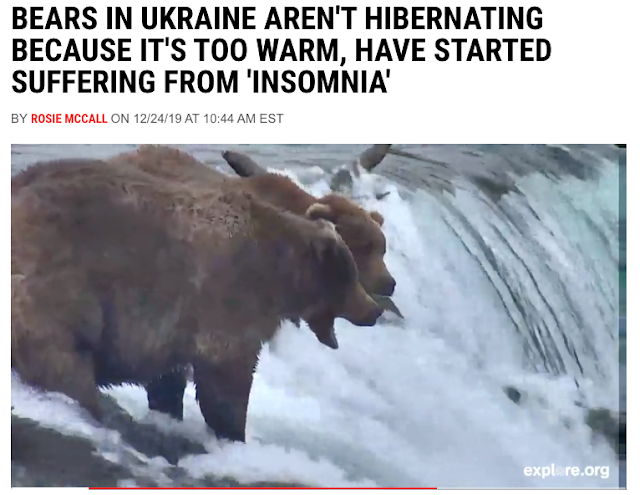 In a Facebook post, Synevyr National Nature Park in southwest Ukraine said winter is a period when all bears should be dormant. 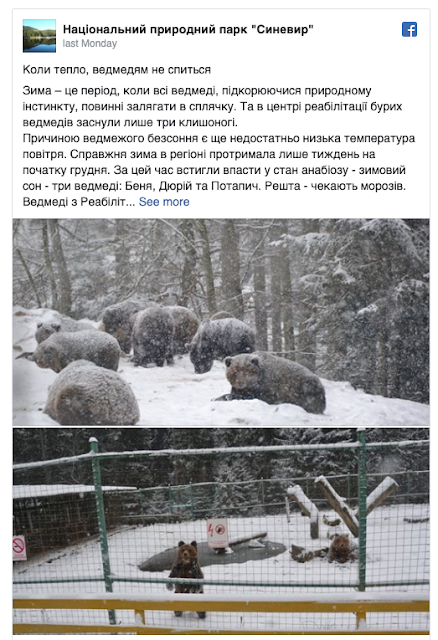 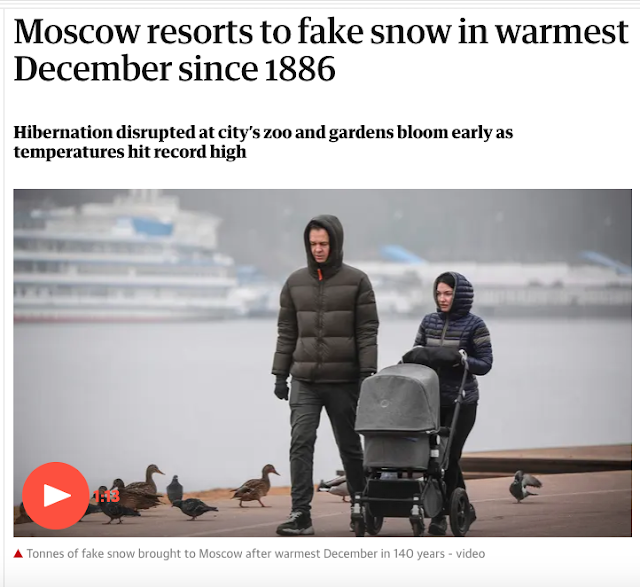 Moscow has been so warm this December that the government has resorted to sending trucks filled with artificial snow to decorate a new year display in the city centre.

Videos of the delivery for a snowboarding hill went viral as observers noted the irony of bringing snow to a city that spends millions each year on its removal.

“This is all the snow there is in Moscow. It’s being guarded in Red Square,” one Instagram user wrote, accompanied with a photograph from near the Kremlin….. 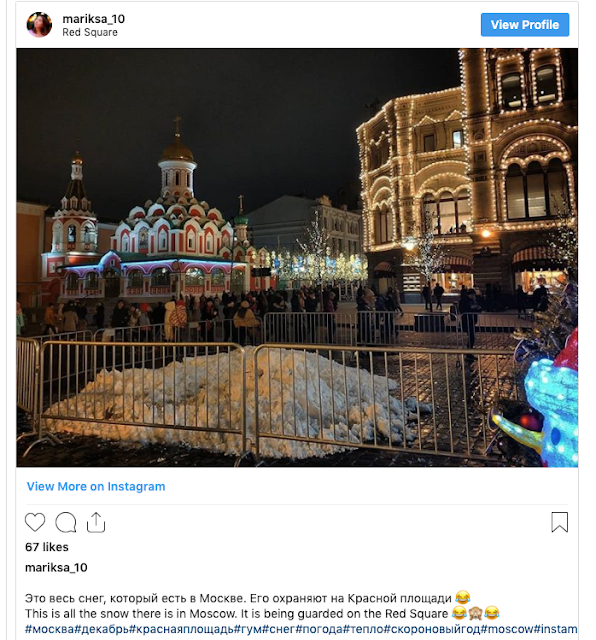 The Moscow region is in the throes of one of its warmest winters since temperatures began to be systematically recorded 140 years ago. The temperature in the Russian capital rose to 5.4C on 18 December, topping the previous record for the month set in 1886.

“It’s not normal at all,” said Alexander Stanko, 62, a former foreman who was admiring the holiday decorations near the Kremlin on Sunday afternoon. As he spoke with a reporter, his granddaughter waved from a carousel set up near Red Square.

“Winters used to be a lot harder here,” he said. “You’d expect a few days with really strong frost and there would almost always be snow by the new year. It has been getting warmer, definitely. That’s why, as you can see, we have this funny snow over here this year.” 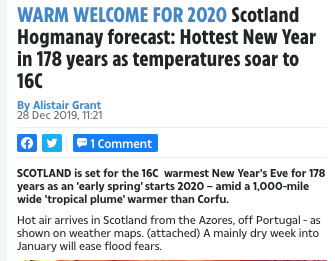 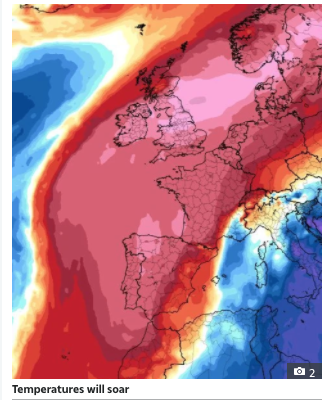 Hot air arrives in Scotland from the Azores, off Portugal - as shown on weather maps. (attached) A mainly dry week into January will ease flood fears. 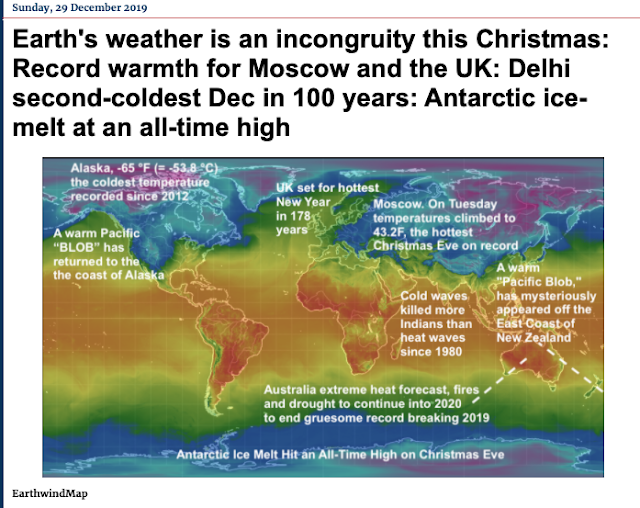 Delhi faces second-coldest December for over a CENTURY: India gripped by ‘bone-chilling’ weather

A wave of unusually cold weather is sweeping across large swathes of India, from remote Kashmir to Delhi, forcing people to seek shelter and light bonfires on the streets. Delhi has been hit with what local media described as ‘bone-chilling days’ this week. In the early hours of Friday, the temperature dropped to almost four degrees Celsius (39.2 degrees Fahrenheit). This December is now on course to become the second coldest in terms of daytime temperatures the capital has seen since 1901, with December 1997 holding the top spot. RT

The UK is set for its warmest New Year’s Eve in 178 years as a vast tropical plume is expected to bring temperatures to balmy heights.

The Met Office has forecast that temperatures could reach highs of around 16 deg C, (61 deg F) up to and including New Year’s Eve on Tuesday, a steady increase from the 7 to 9C average at this time of year in England and Wales. In fact, it will be the UK’s warmest December 31 since the temperatures were recorded in 1841 where the record was set at 15.6 deg C, (60 deg F) in Great Yarmouth way back in 1910. Europe Weekly News

More misery for the Aussies

Penrith in western Sydney will rise to 41 deg C, (106 deg F) today as fresh heatwave kicks in, while regional centres in the Hunter, central west, central and southern tablelands will feel the heat with temperatures well above 35C, (95 deg F). Temperatures are expected to peak on Tuesday, with New Year's Eve forecasts of more than 40C across western Sydney and in regional NSW. "Tomorrow we are expecting peak temperatures to be at South Australia, Victoria and Tasmania," BOM Meteorologist Sarah Scully told Today. "We are expecting temperatures in Tasmania to be about 40C – even hotter for Melbourne at 43C," (110 deg F). 9News

Russians bracing for the typical winter chill have been left baffled by unusually warm weather which scuppered the country's hopes of a white Christmas. At this time of year, Moscow is usually blanketed in snow, but it is not expected until the turn of the year after temperatures on Tuesday climbed to 43.2F, the hottest Christmas Eve on record. Daily Mail

A *frigid* cold is verifying across parts of Alaska now. This morning, a low temperature of -65 °F (= -53.8 °C) has been observed 15 miles northeast of the town Manley Hot Springs! This is the coldest official temperature recorded in Alaska since January 2012 when -66 °F (-54.5 °C) has been recorded in Ft. Yukon! The town of Manley Hot Springs is located around 85 miles west of Fairbanks and around 260 miles north of the capital Anchorage. The location of this extremely low temperatures is in the lowest part of the valley where the cold pool is usually the strongest. Severe Weather Europe

There are signs Antarctica just experienced its highest melt extent ever recorded in the satellite era. The big meltdown hit on Christmas Eve and is bad news for a continent already dealing with a lot. With summer is just getting started there, this is a serious case of Summertime Sadness. Gizmodo


A "Pacific Blob," has mysteriously appeared off the East Coast of New Zealand a reflection of another more famous, "Pacific Blob," off the Alaskan coast which has destroyed the ecosystem

A new "Pacific Blob," has mysteriously appeared off the East Coast of New Zealand and is a reflection of another more famous, "Pacific Blob," which lies off the coast of Alaska and is thought to be the reason of lack of fish resulting in the deaths of millions of seabirds from starvation in the vast area since 2015. The Big Wobble

The new mysterious "Southern Blob," is an enormous area, according to NZHerald. In fact, the blob is a very big patch of water measuring tens of thousands of square kilometres where the water is 4C above the average temperature of 10C to 15C on a similar latitude to Wellington in the Pacific Ocean. The central hot spot is about the size of the North Island(114,000sq km) or the South Island(150,000sq km). The wider area is larger than both islands combined.
https://www.thebigwobble.org/2019/12/earths-weather-is-an-incongruity-this.html?spref=fb
Posted by seemorerocks at 12:00