The tragedy of Jeremy Corbyn

Destroyed by appeasing his 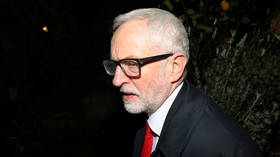 The Jeremy Corbyn project has ended in tears with an utterly demoralising general election defeat for Labour, but it could – and should – have been very different if only Corbyn had trusted his own instincts.
There is a distinctly Shakespearean air to the political demise of UK Labour leader Jeremy Corbyn, which took place, appropriately enough, on Friday the 13th of December 2019 (or you could say 15 March would have been even more appropriate).
“There is a tide in the affairs of men, which taken at the flood, leads on to fortune. Omitted, all the voyage of their life is bound in shallows and miseries,” the great bard wrote in ‘Julius Caesar’.
Jeremy Corbyn was never in a stronger position than on the morning of the day after the general election of June 2017. Against all the odds and punditocracy predictions, he had taken Labour to the brink of a stunning victory. The 40 percent of the vote Labour attained in that election represented the biggest increase in the share of the popular vote the party had achieved in over 70 years. But fatally, Corbyn didn’t take the tide at the flood. He should have used the moment to move swiftly and decisively against his ‘centrist’ enemies in the party who had done so much to undermine him. Instead, he held out an olive branch to them. They repaid his magnanimity by plotting the downfall which came to a head so spectacularly this week.

They had absolutely no idea why they were being asked by Labour to vote again. And they were right.

2nd ref was always an establishment stitch up to reverse a result they didn’t like.

44 people are talking about this
Phase One of the plan was to get Labour to sign up to an electorally suicidal shift on Brexit. Labour did so well in 2017 largely because it gave a clear manifesto commitment to respect the result of the 2016 referendum. But great pressure was exerted on Corbyn to agree to a change in policy and pledge Labour to support a second referendum. Years earlier, Corbyn had, quite rightly, attacked the EU for making the Irish vote again after they had rejected the Lisbon Treaty. But asking Labour Leavers to vote again on whether to leave the EU is precisely what Corbyn was doing in the 2019 general election. It’s true that others were constructing his political coffin, but it’s also true that Corbyn handed them the nails.

The irony lost on most Right-leaning commenters, that identify Labour as the hard-Left, is that it is the Right-wing of the party that supported Remain. If Labour were actually hard-Left, it would have backed Leave.

60 people are talking about this
Phase Two of the plan to ‘Get Corbyn’ was to promote a narrative that Labour under his leadership was absolutely awash with anti-Semitism. Corbyn’s enemies wanted us to believe that Labour, a party which always prided itself on its anti-racist credentials, and which had a Jewish leader as recently as 2015, was in fact a racist party. Incredibly, this audacious campaign succeeded because Corbyn failed to call it out. The level of actual anti-Semitism in Labour was tiny, but the Labour leader accepted the narrative that there was a big problem to deal with. The result of his continually going on the back-foot was that he and his party were denounced as ‘anti-Semitic’ on an almost hourly basis. Chris Williamson, a loyal Corbyn ally, was thrown under the bus on trumped-up charges. But this appeasement only led to the campaign being ratcheted up still further.
Corbyn’s failure to hit back forcefully – or indeed hit back at all – against the smear campaigns of his enemies was praised by some as signs of his Zen-like calm, but to millions of others it looked like weakness. In last week’s leaders’ debate, Boris Johnson labelled Corbyn a supporter of the IRA. Corbyn said nothing in response.
For all his decency, it’s undeniable that Corbyn – when he got to the brink of power – treated his enemies much better than he did his friends. That, sadly, will be his epitaph. A golden opportunity for the left in Britain has been squandered.
“Men at some times are masters of their fates. The fault, Dear Brutus, is not in our stars, but in ourselves, that we are underlings.”
Posted by seemorerocks at 19:40