RECORD HIT FOR MOST

ICE TO MELT IN

ANTARCTICA IN ONE DAY,

DATA SUGGESTS: "WE ARE 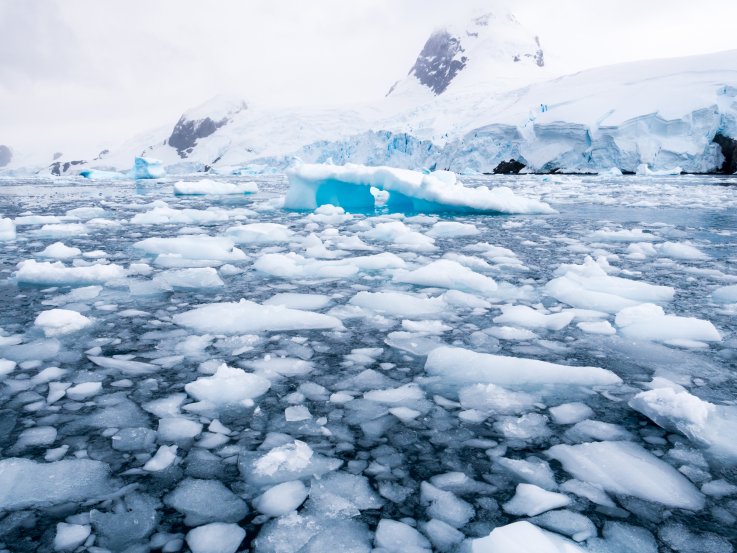 The record in recent decades for the highest level of ice to melt in Antarctica in one day was reached on Christmas Eve, data suggests.

Around 15 percent of the continent's surface melted on Monday, according to the Global Forecast System (GFS) by the National Centers for Environmental Prediction (NCEP). The data comes from the Modèle Atmosphérique Régional (MAR), a model used for meteorological and climatic research.
Xavier Fettweis, a climatologist at the University of Liège in Belgium, who tweeted the data on Friday, said this is the highest melt extent in Antarctica in the modern era, since 1979.

He added the production of melt water is a record 230 percent higher than average since November this year. That's despite the melting season not yet being over.
For the first time, Fettweis said, the melting seemed to explain a negative anomaly in data on Antarctica's surface mass balance (SMB). This is the net balance between what causes a glacier's surface to grow or deplete, for instance because it evaporates or melts away.


"It should be noted that this process is currently missing in most of SMB estimations over Antarctica as melt has been negligible until now. But the climate is changing..." Fettweis said.

Fettweis told Newsweek Antarctica has been "significantly warmer than average" this melting season. But he stressed the data is from a model, and not an in situ observation. The melting could be driven by a number of factors, and experts will need to wait two to three melting seasons to confirm what is going on.
"We have observed a crash of the Antarctica polar vortex just before this melting season," explained Fettweis, referring to low pressure near the pole. "A weaker polar vortex allows warm air masses to reach easier the ice sheet (which is usually protected by its polar vortex as it was the case the previous summer). The fact that the sea ice extent is very low also enhances the possibility of warm air masses to reach the ice sheet."
Asked whether climate change is to blame, he said: "As for most of the anomalies observed on these last months over the Earth (e.g. in Australia), the signal coming from global warming can not be ignored here."
Fettweis said Antarctica had been "protected" by global warming, due in part to a stronger polar vortex over this last decade than usual. But he said this no longer seems to be the case, and climate anomalies observed at the continent can no longer be used by climate skeptics to deny global warming is occurring.
Eric Holthaus, a meteorologist and fellow at the University of Minnesota's Institute on the Environment, shared the data on Twitter.
He wrote: "New data indicates that on Christmas Eve, unusually warm weather melted the most ice across the continent of Antarctica in a single day out of any day in recorded history. 15% of the continent's surface melted, temporarily.
"We are in a climate emergency," said Holthaus.

The figures come as climate change has gained renewed public attention, and is widely considered one of the most pressing issues of our time.
Last month, scientists urged world leaders to take urgent action to tackle climate change, as "abrupt" and "irreversible" climate tipping points that threaten human civilization may have already started.

Tipping points are thresholds that, once passed, can trigger rapid changes to
climate systems. These were first described by the United Nations
Intergovernmental Panel on Climate Change (IPCC) two decades ago. At that
time it was thought they would likely happen if global warming exceeded
pre-industrial levels by 5 C. But since then, new research has indicated the
events could happen even with 1 C to 2 C of warming, the scientists said.
In an article published in the journal Nature, scientists highlighted if the likely interconnected tipping points are met, a domino-effect of "long-term irreversible
changes" to the planet could be triggered.

"Evidence that tipping points are underway has mounted in the past decade," the experts wrote.
Antarctica was among the regions included in the study. Evidence suggests the Amundsen Sea embayment of West Antarctica may have already hit a tipping
point, as the point where the ice, ocean and bedroom meet is "retreating
irreversibly," experts wrote.
If this area collapses, the remaining West Antarctic ice sheets could be
destabilized, "leading to about 3 meters [9.8 feet] of sea-level rise on a timescale
of centuries to millennia," according to a prediction cited by the authors. The
Wilkes Basin on the East Antarctic could face a similar fate, and the Greenland
ice sheet could be "doomed" at 1.5 C of warming as soon as 2030.
This article has been updated with comment from Xavier Fettweis.
Posted by seemorerocks at 11:21