After U.S. Strike On Iraqi Forces Its Troops Will (Again) Have To Leave

"US Dominance In Mideast

Is Over": Iran Declares After

At a moment the US struck five supposedly 'Iran-linked' militia bases in Iraq and Syria on Sunday, sending regional tensions soaring, unprecedented four-day long joint naval drills involving Iran, Russia and China outside the Persian Gulf were simultaneously winding down.
Iran used the occasion of being joined by Chinese and Russian warships in the Gulf of Oman and Indian Ocean to declare that US dominance in the Middle East is now over.
"Today, the era of American free action in the region is over," naval commander Rear Admiral Hossein Khanzadi said. "They must leave the region gradually," he added.
And now Iran has not only said the drills are set to continue annually upon their close on Sunday, but is inviting other countries to join.
Feeling emboldened by the official participation of the Chinese and Russian navies, Adm. Khanzadi further told semi-official Mehr news agency:

We are seeking to achieve collective security, and for that purpose, we are inviting regional countries to join us [in the drills].

From the start, Iranian officials have touted the joint naval drills as sending “a highly significant message” to the US and their allies, especially given the United States has struggled to attract key European allies to join its own 'maritime naval mission' in the gulf to thwart Iran. Instead, Europe has initiated its own mission which leaders have emphasized has nothing to do with the US project.
Adm. Khanzadi continued, “There is no threat facing the Persian Gulf region except for the presence of foreign forces such as the US, which are endangering the security of this region.” He also said Iran is planning future such drills with regional allies in the Caspian Sea. The weekend's joint exercises were the first of their kind, and were conducted across an area of 17,000 square kilometers to demonstrate "various tactical exercises".

Daniel Larison@DanielLarison
Setting off an Iraqi insurgency against U.S. forces just in time for an election year is not the dumb move I thought Trump would make, but that's what seems to be happening
43
6:14 AM - Dec 31, 2019
Twitter Ads info and privacy


The statements inviting other powers to join Russian and China for next year's exercise come after Tehran charged Washington with committing acts of "terrorism" by its weekend airstrikes on sovereign Iraqi soil.
Russia too condemned the airstrikes as "unacceptable and counterproductive" in a foreign ministry statement on Monday. 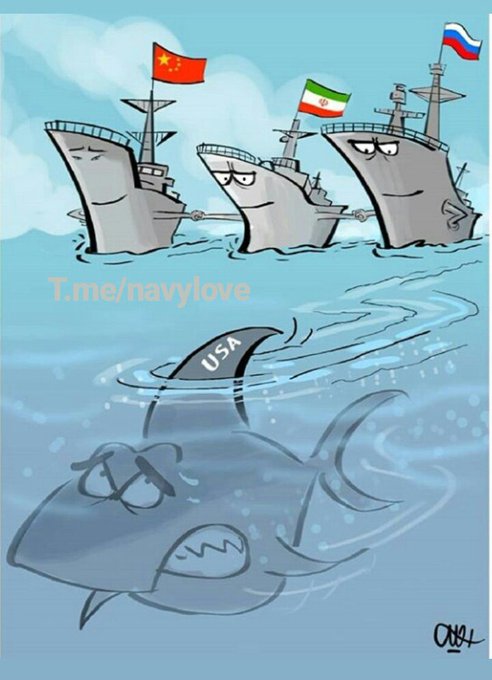 And Kataib Hezbollah — which lost at least 24 of its members with scores more wounded in the US airstrikes — urged all Iraqi paramilitary groups to work to expel American forces from Iraq.
“We have no choice but confrontation,” a Kataib Hezbollah statement said. “Trump should know that he will pay a heavy price in Iraq and the countries where his criminal forces are present.”

After U.S. Strike On Iraqi

Forces Its Troops Will

(Again) Have To Leave

That may be true or may be not true. Here is what happened.
On Friday a volley of some 30 107mm Katyusha rockets hit the K1 base which houses Iraqi and U.S. troops near Kirkuk, Iraq. One U.S. mercenary/contractor died, two Iraqi and four U.S. soldiers were wounded. Instead of finding the real culprits - ISIS remnants, disgruntled locals, Kurds who want to regain control over Kirkuk - the U.S. decided that Kata'ib Hizbullah was the group guilty of the attack.
Kata'ib Hizbullah is a mostly Shia group with some relations to Iran. It is part of the Popular Mobilization Units (PMU) which were founded and trained by Iran to stop and defeat the Islamic State (ISIS) when it occupied nearly a third of Iraq and Syria. KH is like all PMU units now under command and control of the Iraqi Ministry of Defense.
To take revenge for the death of one of its mercenaries the U.S. air force attacked five camps where Kata'ib Hizbullah and other Iraqi forces were stationed:

All of the KH positions that were hit were in the western Anbar desert, 450 kilometer away from Kirkuk. KH has bases on both sides of the Iraqi-Syrian border where it is engaged in fighting the still active ISIS. The results of the air strikes were devastating:


Elijah J. Magnier @ejmalrai - 6:20 UTC · Dec 30, 2019
32 killed and 45 wounded the count of #US violent aggression on #Iraq security forces brigades 45 and 46 last night on a military position established to counter-attack and raid #ISIS remnant at al-Qaem, the borders between Iraq and Syria.

The al-Qaem/al-Bukamal border station is the only open one between Iraq and Syria which is not under U.S. control. The U.S. was furious when the Iraqi prime minister Adil Abdul Mahdi allowed it to be established. It was previously attacked by Israel which had launched its assault from a U.S. air force base in east Syria.


TØM CΛT @TomtheBasedCat - 6:11 UTC · Dec 29, 2019
It wasn't just Hezbollah Battalions members who were affected, there are also wounded among the ranks of the Missiles Forces / Rocket Battalion which is considered a separate unit apart from the numbered brigades.

The dead include Abu Ali Madiniyah, the commander of the 1st battalion of the 45th Brigade.
The strikes were in total disregard of Iraqi sovereignty and against forces under direct command of the Iraqi state:


In a statement, Abdul-Mahdi said Defense Secretary Mark Esper had called him about a half-hour before the U.S. strikes to tell him of U.S. intentions to hit bases of the militia suspected of being behind Friday’s rocket attack. Abdul-Mahdi said in the statement he asked Esper to call off U.S. retaliation plans.The statement said Iraqi President Barham Salih also received advance notice from a U.S. diplomat, and also asked unsuccessfully for Americans to call off it off.

The strikes were designed to kill those who still fight ISIS in its most virulent hide outs:


Rania Khalek @RaniaKhalek - 18:44 UTC · Dec 29, 2019
The PMF group that was hit by the Americans has been fighting ISIS for years. They were on the front lines protecting Iraq from ISIS in Syria and engaged in the ongoing battles with ISIS in the Syrian and Iraqi deserts. They were THE line of defense.
The American attack on this PMF group is not only a disproportionate act of revenge, it is also a threat to regional security. AND it’s pathetic for a so-called super power to get into a fight with a small militia.

Here is video of the bloody aftermath.
There are some 5,000 U.S. soldiers in Iraq in bases which also house 10,000nds of Iraqi soldiers and PMF troops. Revenge attacks are now inevitable:


In the aftermath of the American strikes, Iraqi Prime Minister Adil Abdul-Mahdi said, “We have already confirmed our rejection of any unilateral action by coalition forces or any other forces inside Iraq. We consider it a violation of Iraq’s sovereignty and a dangerous escalation that threatens the security of Iraq and the region,” according to a statement released on Iraqi state television.Abdul-Mahdi now finds himself facing the nightmare possibility of Iranian-linked paramilitaries, whose political wings hold enormous sway over his government, going to war with American forces on Iraqi territory, which would compound a disastrous few months in which the deaths of hundreds of protestors have been laid at his feet, prompting him to hand in his resignation to parliament.
The coming days and weeks will answer a number of questions about how this perilous situation will play out, primarily how far are the paramilitaries willing to act upon their rhetoric which has endlessly stated that the American presence in Iraq is a continuation of the occupation, in addition to their readiness to take military action in order to force out the Americans, “once again”.

The U.S. and Israel have already killed hundreds of Iraqi forces that are aligned with Iran. But these were the most egregious strikes. There is no doubt. The U.S. forces will have to (again) leave Iraq:


Brasco_Aad @Brasco_Aad - 19:55 UTC · Dec 29, 2019
Iraqi PMU Asai'b Ahl al-Haq statement on the American attack on Iraq tonight:
''The American military presence has become a burden for the State and a source of aggression against our forces and therefore it has become mandatory for all of us to expel them from Iraq.''

U.S. President Donald Trump had declared that he wants U.S. troops to leave the Middle East. But the 'deep state', the Pentagon and State Department bureaucracy, have resisted any such move:


Pompeo, Esper and Gen. Mark Milley, chairman of the Joint Chiefs of Staff, flew to Palm Beach, Florida, after the operation to brief President Donald Trump.Esper said they discussed with Trump “other options that are available” to respond to Iran.
...

Trump was at Mar-a-Lago but did not appear with his top national security officials. After Pompeo and Esper spoke, the president traveled to his private golf club in West Palm Beach. The White House did not immediately say why Trump returned to the club after spending nearly six hours there earlier Sunday.

Yesterday's attacks guarantee that all U.S. troops will have to leave Iraq and will thereby also lose their supply lines to Syria.
One wonders if that was the real intent of those strikes.
Posted by seemorerocks at 09:24