Wm Barr: Impeachment could be trivialised by the Democrats 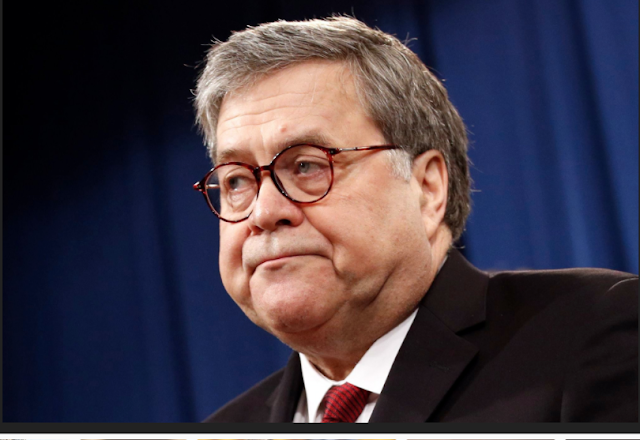 
Attorney General Bill Barr, in an interview Wednesday with Fox News, warned that impeachment could be "trivialized" by Democrats' efforts to remove President Trump, while also firing back at ex-FBI Director James Comey's reaction to the Justice Department inspector general's report on the Russia investigation.

Barr sat down with Martha MacCallum as the House of Representatives was debating two articles of impeachment ahead of an expected floor vote. The top law enforcement officer noted that the Constitution specifically includes a high standard for impeachment, and said he does not believe the allegations against President Trump meet that standard
COMEY ACCUSES BARR OF 'IRRESPONSIBLE STATEMENT' ON FBI CONDUCT
"As a general matter, I think we have to be careful about trivializing the process and they put in a hurdle of high crimes -- of treason, bribery and other high crimes," Barr told "The Story with Martha MacCallum" in an interview scheduled to air Wednesday night. "The articles of impeachment here do not allege a violation of law, and it looks as if it’s going to be along partisan lines -- I think -- you know, I’m concerned about it being trivialized and used as a political tool."
WATCH ATTORNEY GENERAL BARR ON FOX NEWS' 'THE STORY' WEDNESDAY AT 7 PM ET
House Republicans made similar arguments as members of both parties took to the House floor throughout the day Wednesday. They clashed over articles of impeachment against Trump alleging abuse of power and obstruction of Congress, in connection with his efforts to pressure Ukraine to launch investigations of Democrats as his administration withheld aid. GOP members have claimed that abuse of power is not a statutory crime, and that if Democrats had a problem with Trump asserting privilege when he instructed witnesses not to comply with requests to testify, they should have gone to the courts.
Barr also addressed comments made by Comey in the wake of Inspector General (IG) Michael Horowitz's report and subsequent testimony regarding the FBI's conduct during the Russia probe. Horowitz found that FBI officials misled the Foreign Intelligence Surveillance Court (FISC) through inaccuracies and omissions in warrant applications for the surveillance of former Trump campaign adviser Carter Page.
WATCH BILL BARR'S INTERVIEW ON 'THE STORY WITH MARTHA MACCALLUM WEDNESDAY NIGHT
Comey was defensive of the FBI during an interview on "Fox News Sunday," insisting that the report did not show that agents engaged in any intentional misconduct. Horowitz did say that the investigation was launched properly and that he did not see evidence of political bias. Still, he has also said that the motivation behind the FBI's actions remains unknown.

Video
"There are so many errors, we couldn’t reach a conclusion or make a determination on what motivated those failures other than we did not credit what we lay out here were the explanations we got," Horowitz told the Senate Homeland Security and Governmental Affairs Committee during a Wednesday hearing.
This is similar to what Barr said during an NBC News interview after the report's release.
"These irregularities, these misstatements, these omissions were not satisfactorily explained, and I think that leaves open the possibility to infer bad faith," he said.
Yet Comey called this "an irresponsible statement," telling Fox News' Chris Wallace that Barr "does not have a factual basis as the Attorney General of the United States to be speculating that agents acted in bad faith."
Barr said he does not view the situation the same way as the former FBI director.
"One of the things that I object to is the tack being taken by Comey, which is to suggest that people who are criticizing or trying to get to the bottom of the misconduct are somehow attacking the FBI. I think that is nonsense," Barr said. "We’re criticizing and concerned about misconduct by a few actors at the top of the FBI, and they should be criticized if they engaged in serious misconduct."
Posted by seemorerocks at 14:36