Updates from the Australian bushfires - 30 December, 2019

Up to 70 fires have broken
out throughout South
Australia on a day of
catastrophic conditions,
threatening townships and
homes and forcing residents
to seek shelter.

Hundreds of firefighters and several water bombers have been called in to fight the ongoing fire near Cudlee Creek.
It comes amid a deepening bushfire crisis in New South Wales, where two volunteer firefighters lost their lives while travelling to battle blazes in conditions described as "the worst imaginable".
In South Australia, health authorities have confirmed about eight people — including firefighters — have been taken to hospital with burns and smoke inhalation.
The CFS has declared an emergency warning for the Adelaide Hills fire, east of Adelaide, which is burning in grass and scrub near Hollands Creek Road and Snake Gully Road at Cudlee Creek in the Mount Lofty Ranges.
The warning now includes Cudlee Creek, Lobethal, Woodside, Lenswood and Inverbrackie.
The CFS said the Cudlee Creek fire had so far burned about 300 hectares and winds were starting to move towards the west on the fireground.
It said the blaze was moving in a south-easterly direction towards Woodside, Charleston and Inverbrackie, but conditions are continually changing.

PHOTO: In Lobethal, locals have taken shelter at the town's oval. (ABC News: Michael Clements)
A stubble fire sparked by lightning strikes is also burning out of control at Maitland, 160 kilometres west of Adelaide, prompting another emergency warning.
The CFS said a series of lightning strikes hit the region a short time ago, around 5 kilometres from the Maitland township.
The fire is now threatening the town.
Authorities have issued an emergency warning for a bushfire burning out of control at Parilla on the Mallee Highway near Lameroo in the Murraylands.
The CFS said the fire near Lameroo may pose a threat to lives directly in its path, and said residents should act now as it would soon be too dangerous to drive.
CFS chief officer Mark Jones said between 8:00am and 12:00pm it had received calls to 28 significant fires.

PHOTO: The fire burns at Cudlee Creek off Snake Gully Road. (ABC News: Chris McLoughlin)
"Approximately 500 firefighters are in the field firefighting at this time," he said.
"The Cudlee Creek fire is burning in terrain which is particularly difficult to firefight, and under the current conditions is unlikely to be controlled rapidly."
The fire jumped Fox Creek Road and embers are falling on those townships, which are under threat.
There are reports of wineries being impacted by the fire.
A giant water bomber from New South Wales is currently assisting and the CFS has urged people in the area to activate their bushfire survival plans.

Just accidentally took the freeway to Reynella instead of going to Marion and came across a fresh fire in Reynella. Locals fighting fire in bathers and things

"There are roads closed in the area, do not travel unless absolutely necessary," the CFS said.

A fire burning in Adelaide's north has been contained and downgraded to a watch and act for residents in Hillier, Hillier Park, Munno Para Downs, Kudla, Munno Para West and Angle Vale near Gawler.
The fast-moving blaze had been burning in a south-easterly direction towards populated suburbs in Adelaide's north and was deemed an immediate threat to lives and homes.
"The Angle Vale fire is a grass fire moving quickly and early reports are properties may have been impacted," Mr Jones said.
A fire in a storage yard at Old Reynella in Adelaide's south has also prompted a warning to residents from the Metropolitan Fire Service.
The incident is causing smoke to drift across the area and people with respiratory issues have been advised to stay inside and close their doors and windows.

Power cut to thousands of customers

SA Power Networks has cut power to more than 2,000 customers at the bushfire zones.
Suburbs affected in the Adelaide Hills include Lobethal and an area north of Woodside.
Power is also out around Cudlee Creek.

PHOTO: Smoke billows over Lobethal in the Adelaide Hills as an uncontrolled bushfire approaches. (ABC News: Chris McLoughlin)
In Adelaide's northern suburbs, power has been cut to Roseworthy and may be cut to Two Wells, Virginia and Edinburgh.
"Due to the rapid escalation of weather and fire conditions we may disconnect power," SA Power Networks said.
In total, there are almost 12,500 customers across the state without electricity with temperatures in the low to mid 40s in some parts.
Martin, who lives on Cudlee Creek Road, told ABC Radio Adelaide his family has evacuated the area.
"My property is halfway between Cudlee Creek and Lobethal," he said.
"Looking across in a westerly direction towards Lenswood … I'd say the flames would be well in excess of 80 to 100 feet [high].

"I just thought I'd stop … unbelievable scenes, just to take this in really because the flames are absolutely mammoth, and the conditions are just unbelievably bad.

"The wife has taken our two boys and the dogs down to the city, I've turned my cattle out into a rather large paddock and opened a few extra gates and they've got access to a very large dam.
"It bothers me when I see people staying, at the end of the day it's only a house."

PHOTO: Thick smoke from the Cudlee Creek bushfire can be seen from the main street of Lobethal. (ABC News: Chris McLoughlin)

Cool change on its way amid heatwave

Much of the state is facing catastrophic fire conditions as it swelters through its fourth day of a heatwave.
Adelaide is forecast to reach a top of 46 degrees Celsius after having its hottest night on record at the West Terrace weather station.
Parts of the state are tipped to reach close to 50C before a cool change is expected this afternoon.
Temperatures have again soared into the mid to high 40s, with Keith reaching 49.2C.

24 people are talking about this
About 300 people have suffered from heat-related illnesses so far this week.
SA Health said it was managing demand and had freed up capacity by safely discharging patients and cancelling elective surgeries.
A severe thunderstorm warning has been issued for a large part of the state, including the bushfire affected areas.
Thunderstorms are developing and are likely to produce damaging wind gusts in excess of 90 kilometres per hour during the afternoon.
Bureau of Meteorology senior meteorologist Vince Rowlands said the cool change was expected to reach Adelaide about 4:00pm.
"At this stage probably thinking around 3:00pm [it] should be around the foot of the Fleurieu [and] Yorke peninsulas, sort of just past Wudinna, extending up into the north-west pastoral.
"Probably expecting it to come through Adelaide initially with a bit of a waffly wind change, not expecting that to cool down temperatures too much, maybe about 4:00pm.
"Then we start to see a more significant southerly come through somewhere between 5 and 6:00pm.

"That will then bring substantial change in temperature."

Residents north of Adelaide 'not prepared'

Earlier, TJ who lives in Blakeview, a suburb in Adelaide's north, said the emergency warnings for the area were worrying as many suburban residents were not prepared.
"Where I am, we've already got some emergency warnings dipping into our area," he told ABC Radio Adelaide.

PHOTO: The fire in Adelaide's north is currently out of control. (ABC News)
"We live in a properly suburban suburb, none of us have bushfire plans.
"Munno Para Downs is where the fire is and it's burning towards us, once it clears Munno Para West we might have to look to evacuate and no-one's got plans to do that.
"There's a lot of elderly people in here who are probably not sure what to do.
"We are evacuating now to be safe because it's burning in our direction so, you never expect to have to do that in a metropolitan suburb. 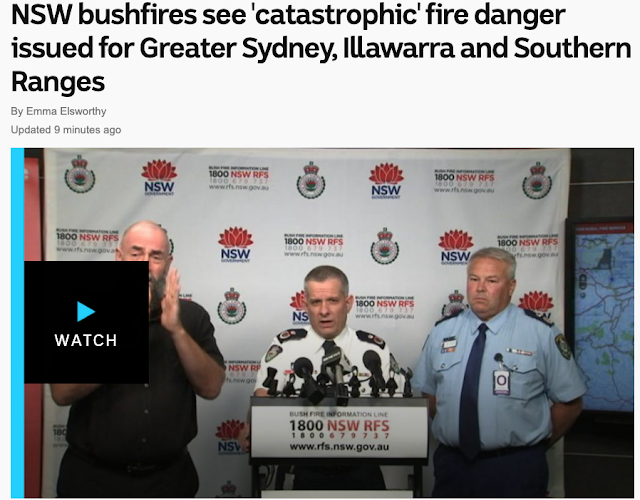 The NSW Rural Fire Service (RFS) has issued a catastrophic fire danger warning for tomorrow across Greater Sydney, the Illawarra/Shoalhaven and Southern Ranges amid a forecast of hot and gusty weather conditions.

It is only the second time such a warning, the highest level of bushfire danger, has been issued for the Greater Sydney area since the rating system was introduced in 2009.

Both instances have been during this year's unprecedented bushfire season in NSW, which has already seen blazes tear through 2.9 million hectares.

Temperatures are expected to peak at the mid-40-degree mark during Saturday's heatwave, with gusty winds and dry conditions exacerbating the 100 blazes burning in the state.

"Tomorrow is possibly going to be one of the toughest days we've had," he said.
https://www.abc.net.au/news/2019-12-20/nsw-bushfire-catastrophic-fire-danger-forecast-for-saturday/11818896 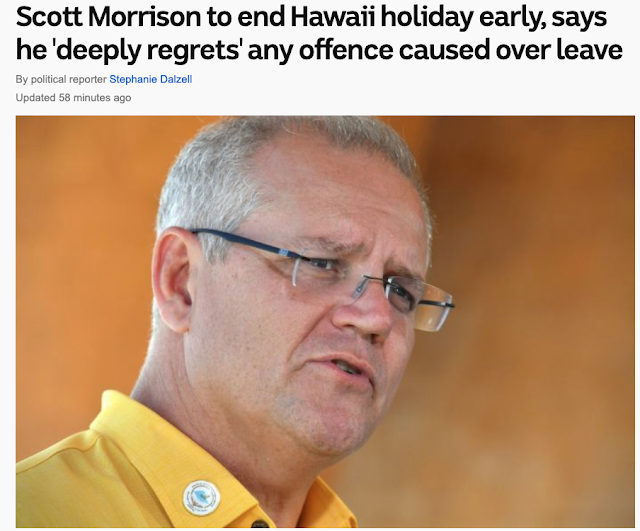 Prime Minister Scott Morrison will cut a Hawaiian family holiday short, saying he "deeply regrets" any offence caused by his decision to take leave as bushfires burned across Australia.

He had received criticism from both the public and Labor politicians over his holiday, but following the deaths of two volunteer firefighters in New South Wales he announced he would return as soon as could be arranged.

His office told the ABC he would be flying into Sydney tomorrow.

"I deeply regret any offence caused to any of the many Australians affected by the terrible bushfires by my taking leave with family at this time," he said in a statement.

"I have been receiving regular updates on the bushfires disaster as well as the status of the search for and treatment of the victims of the White Island tragedy."
https://www.abc.net.au/news/2019-12-20/scott-morrison-deeply-regret-holiday-returns-to-australia/11817084
Posted by seemorerocks at 18:31