Was there an attempted coup in Moscow yesterday?

My suspicion is that this will get almost no coverage from media - either Russian or western.

Was there an attempted coup
in Moscow during Putin's
press conference?

At the time this was unfolding I paid very little attention - just another shooting. However, there seems to be MUCH more than meets the eye as early reports told of multiple shooters, something that is confirmed by the following reporting. Also, this appeared to be timed to coincide with Putin's 4 hour press conference.

Was this an attempted coup or an attempt to assassinate Vladimir Putin.

The following is the audio of a discussion on TruNews.  There is video footage which I have been unable to pin. I suggest looking at the original video footage (TruNews are currently banned from Facebook for telling the truth).

Watch the original TruNews Godcast HERE
This is the coverage that is referred to from the Latvian-based Russian news outlet, Meduza.

I have given the LINKS to the video footage. 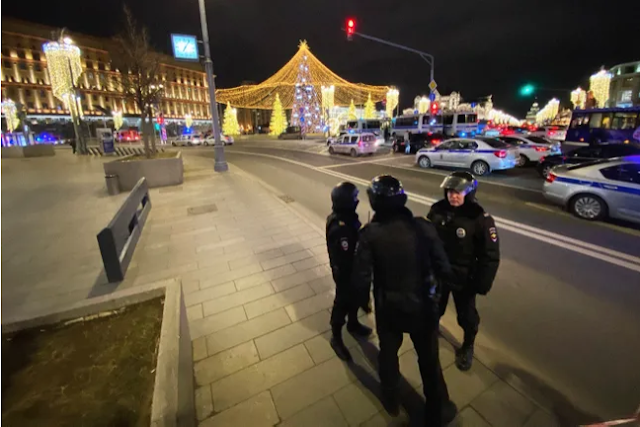 A shooting has taken place in central Moscow at the Federal Security Service (FSB) building on Lubyanka Square. RBC reported that an unknown individual opened fire there using a Kalashnikov automatic rifle. Preliminary eyewitness reports indicated that one individual began shooting in the FSB’s reception area, after which he ran out into the street and continued shooting there. RT reported that the shooter barricaded himself inside a nearby building while exchanging fire with officers.
As of 7:13 PM local time, the shooter had been killed, according to the FSB press service. Officers are currently working to establish his identity. Multiple journalists reported hearing what sounded like gunshots even after the shooter was dead, including a Meduza correspondent.
The Telegram channel112 initially claimed that three people were involved in the shooting, and two were killed immediately, but this report appears to be false. While the Moskva news agency reported that the FSB ultimately confirmed this version of events, Interfax has written that the FSB said only a single shooter was involved. Moskva later deleted its story. 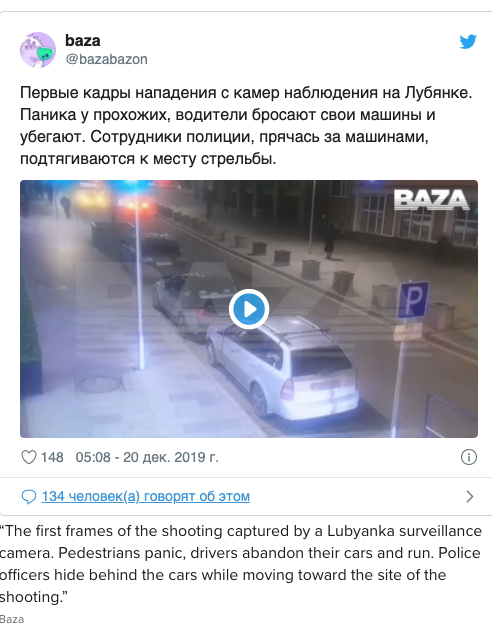 There have been multiple fatalities among security employees. 112 wrote that three Federal Protective Service (FSO) employees were killed, though no official reports of those deaths have been released. Mash, which is also based on Telegram, reported the death of one traffic safety employee standing guard outside the building, which the FSB later confirmed. According to the Moskva News Agency, two people were injured in a shootout, and one later died of his injuries. The agency did not specify whether those two individuals were affiliated with a government agency. An FSB representative subsequently told RIA Novosti that an FSB agent had been killed, and the Health Ministry reported five total injuries.

We analyzed videos from Moscow’s FSB headquarters shooting. One of the injuries was likely caused by security agents after the shooter was dead.

Meduza has analyzed eyewitness videos from the December 19 shooting at Moscow’s Lubyanka Square. In the attack, 39-year-old Yevgeny Manyurov targeted the headquarters of Moscow’s Federal Security Service (FSB), and two FSB employees died. Their names are not yet known. Manyurov himself was shot by special forces. However, combining several videos of the shooting demonstrates that shots likely continued to be fired even after Manyurov was killed. This means at least one of the victims may have been shot by security officials because the various agencies on site did not coordinate their actions, multiple sources told Meduza.
On the evening of December 19 near Moscow’s Lubyanka Square, shots rang out: 39-year-old Yevgeny Manyurov had opened fire near the FSB’s reception area on Kuznetsky Bridge Street. He then kept shooting, moving toward the square, until he himself was shot by special forces. One FSB officer was killed at the scene, and another died from his wounds on the evening of December 20. Five more people were wounded, meaning that the attack had seven total victims, as Russia’s Investigative Committee noted (the Health Ministry had counted six victims the previous evening). By analyzing multiple eyewitness videos, Meduza has discovered that one of those injured may have been shot by security officials themselves after Manyurov had already been killed.


The moment the shooter was killed is visible and audible in multiple eyewitness videos published online, including some that were taken from inside the FSB building with individuals who presumably work for the agency commenting behind the camera. However, even after the moment Manyurov was shot, machine gun fire can be heard, and the presumed FSB agents ask, “Who else are they shooting? Is he not alone?” On the day of the incident, the FSB announced that the attacker had been killed around 7:08 PM, but Meduza’s correspondent on the scene said shots could still be heard as late as 7:15.
In a different video recorded from another angle, someone can be seen running past the parking lot outside the FSB building where the shooter was hiding. The running figure is then shot down. Meduza compiled the videos and synchronized them using the sounds of the gunshots in each. The resulting analysis indicated that security officials did not know exactly how many shooters they were facing and that there was a lack of coordination among different agencies and divisions. That caused some groups to continue shooting even after the only attacker had been killed.

Sources told Meduza and Open Media that disagreements plagued the response from different law-enforcement agencies. The Telegram channel VChK-OPGU (“Cheka-Joint State Political Directorate”), whose reporting specializes in high-profile criminal cases, described the situation in the following words: “When the special forces arrived, FSB HQ officers refused to let them into the building, where they could have taken up an optimal position. Afterward, [special-forces snipers] waited 15 minutes for an order from the FSB command to eliminate [the shooter].”
A source who learned about the course of events on Thursday from a senior FSB officer told Meduza that some people were injured after the shooter was already dead: “He ran out [from the FSB entrance], shot at the police officer who was between the ‘Detsky Mir’ building and [guarding] headquarters. Then he tried to hide behind the columns, which is where they got him. He was firing, maybe even aiming okay, but he didn’t understand a thing. In combat operations, you’ve got to run from position to position. Everything that happened next was all an interdepartmental mess because nobody knew who they were, how many there were, or where they were. There was shooting everywhere and it kept going, even after they’d already shot [the attacker]. There was a police detachment a hundred meters off. They jumped out from below, from Lybyanka Square, and also started firing. Of course, nobody understood anything and there was zero coordination.”
Another source who “participated in the shootout” told the website Open Media that a special-forces detachment advanced around 6:50 p.m. from Myasnitskaya Street toward Furkasovsky Lane, as there was an exchange of gunfire outside the number four entrance to the FSB building. The detachment’s officers were informed that at least one of the attackers had been killed and another dressed all in black was still returning fire.
The newspaper Moskovsky Komsomolets published the names of the two victims killed: 32-year-old traffic police officer Ilya Fisenko and 35-year-old FSB agent Konstantin Odnolepkov. The two men were the first to be shot when the attack started at 6:10 p.m. Both were hospitalized in critical condition at Moscow’s Sklifosovsky Hospital. Another victim, 35-year-old civilian Pavel Anisimov, was sent to the Botkin Hospital around 6:45 p.m., reported Moskovsky Komsomolets.
The newspaper says 29-year-old Alexander Zamchalin was taken to Inozemtsev Hospital, but it’s unknown if or when the officer was examined by doctors. On December 19, Russia’s Health Ministry reported one fatality and five individuals wounded; a day later, federal investigators said two victims were killed in the shootout and five were wounded, though officials named only four injured persons.

This is a brief report from Reuters 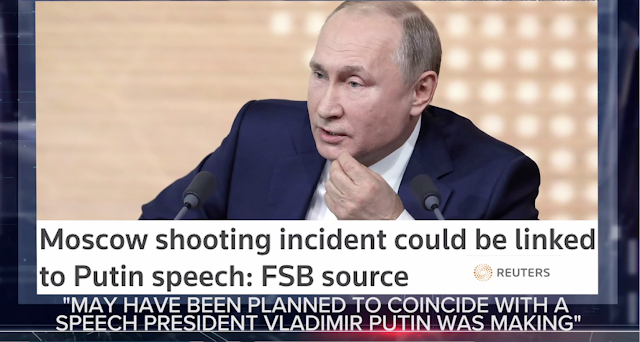 A shooting incident in central Moscow on Thursday evening may have been planned to coincide with a speech President Vladimir Putin was making to commemorate Russia’s day of the security services (FSB), a source close to the FSB told Reuters.