What's in store for the Repo Market?

It's D-Day For The Repo

Billion In Liquidity Will Be

Last week's apocalyptic report by repo market guru Zoltan Pozsar, which for those who missed it predicted that an imminent market crash and loss of control of overnight rates by the Fed would spark nothing short of QE4, sparked an unprecedented panic at the Federal Reserve, which just two days later unveiled a historic liquidity injection, in which the Fed promised to inject no less than $500 billion in the next 4 weeks to avert a catastrophic freeze in the repo market as we approach the year end "turn", which would consist not only of a continuation of the Fed's T-Bill POMO, but also a massive injection of nearly $500 billion in overnight and term repos in the coming days. 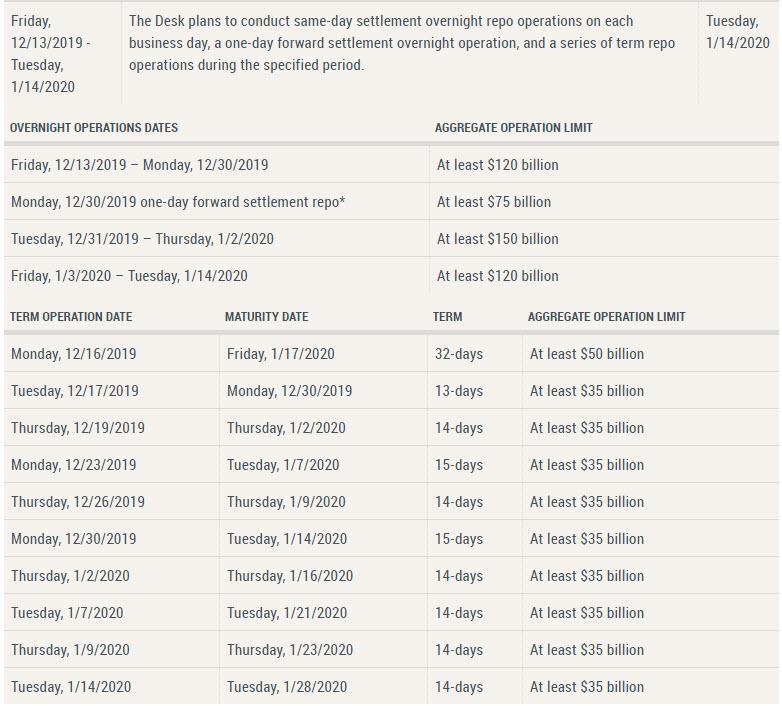 In other words, instead of a reactive QE4 - as predicted by Pozsar - the Fed will flood the repo market with a proactive firehose of liquidity.
There's more: add in the incremental liquidity from the expanded overnight repo of about $50 billion and another $60 billion in T-Bill purchases, and the Fed will inject a total of just shy of $500 billion in the next 30 days. This also means that by Jan 14, the Fed's balance sheet would have grown by a cumulative $365BN in "temporary" repos, and together with the expanded overnight repos, and the $60BN in monthly TBill purchases, and by mid-January, the Fed's balance sheet, currently at $4.066 trillion, will surpass its all time high of $4.5 trillion!
The question then is whether this will be sufficient to refute the repo Doomsday predicted by Pozsar, one which was supposed to launch QE4, or will the Fed's gargantuan liquidity injection still not be enough and lead to a collapse in the repo market.
Well, since the next key catalyst in the potential repo market turmoil is imminent, we may know as soon as tomorrow, when there is another large December corporate tax payment date (with as much as $78BN being remitted to the TSY) and another $54 billion in US Treasury settlements.
Recall, that as we explained last week, the mid-December funding dynamics looks very similar to mid-Sep except for the outsized role of the Fed. On Monday, Dec 16, Bank of America anticipates that $54Bn of UST coupon settlements coupled with what has historically been $30-50BN of corporate tax payments to UST. This could result in a UST cash balance inflow - or a liquidity drain - of up to $80-$100bn in just one day. 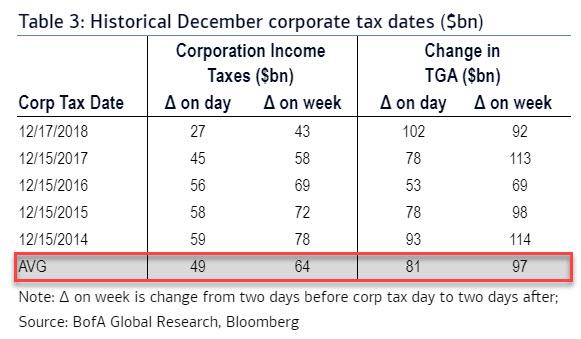 Also recall, every dollar of UST cash balance increase represents a similar USD reserve drain from the banking system, and a similar liquidity drain in mid-September culminated with the now historic explosion in overnight repo rates. 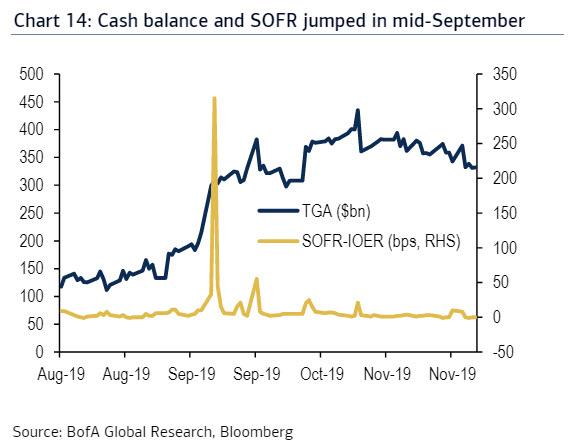 So should traders panic? Well, if the Fed's gargantuan liquidity injection is anything to go by, the answer is no, and as BofA's Mark Cabana writes, "despite the similarities we do not anticipate a material spike in funding due to the Fed's ongoing reserve management operations."

The main reason we do not anticipate considerable funding stress is due to the outsized presence of the Fed now vs mid-Sep. In mid-Sep the Fed was still under the impression it could drain reserves from the banking system without a material impact on funding levels. Since mid-Sept the Fed has learned the banking system has reached reserve scarcity and the Fed it is now adding reserves via repo operations and outright bill purchases to stabilize funding markets. The Fed will ensure it adds enough reserves to offset any Treasury cash balance drain in Dec.

Consider that as of last week, the Fed has provided $340bn in funding through their existing repo and bill purchase operations: 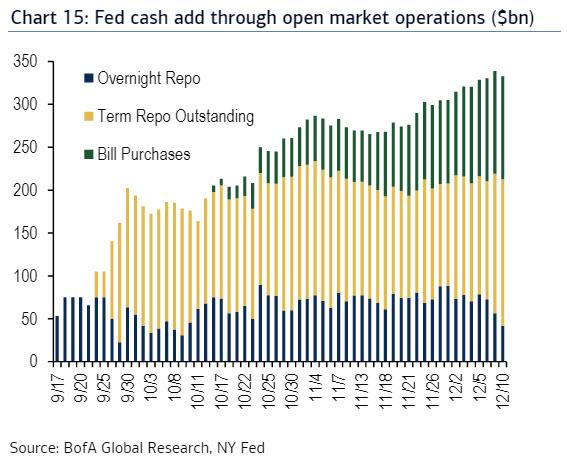 Furthermore, as revealed on Friday, in anticipation of the Monday liquidity drain, the Fed announced that it would expand the Monday term repo up to $50 billion, and extend the maturity date to January 17, allowing dealers to lock in excess liquidity well beyond the "turn". However, contrary to Cabana's expectation that "the Fed will increase O/N repo operation limits to around $200bn in the days surrounding Dec 16" there is some risk the Fed has misjudged how much net liquidity will be soaked up as a result of Monday's drain.
As a result, Cabana notes that even with this operational change, funding could still be volatile as bank portfolios and money fund deposits get pared back amidst corporate outflows, while dealer intermediation of Fed repos may also be challenged with year-end regulatory reporting dynamics limiting how smoothly this funding gets passed along, something Pozsar discussed extensively last week. 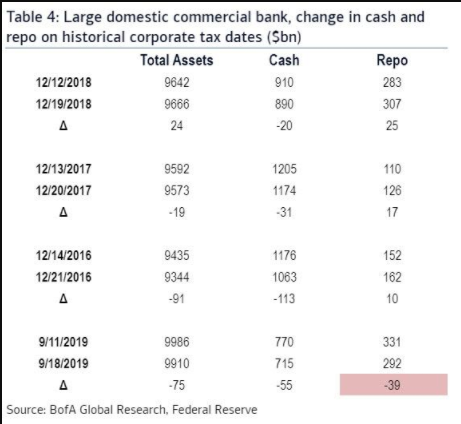 In any case, the adjustment to Fed repo operations is the latest of measures undertaken to ensure repo remains relatively stable at year end, and although overnight repo markets will likely be volatile around year-end BofA's concern around the turn has moderated in recent weeks and certainly after Friday's announcement of a gargantuan liquidity backstop.
As a result, Cabana now "thinks the Fed has provided enough liquidity and dealers have adjusted their businesses around GSIB to ensure funding markets remain relatively stable leading into year end." Ironically, the BofA strategist now sees risks that "funding trades too soft early in 2020 vs the Fed's policy target range. This will likely result in one or two 5bps technical IOER increases to ensure fed funds does not fall below the Fed's target range in 1H '20" as the overall funding situation shifts from too little reserves, to too many, potentially forcing dealers to shift from the repo facility to the reverse repo facility!
Incidentally that observation was echoed by another repo market experts, Curvature's Scott Skyrm, who on Friday penned the following year-end repo market prediction:

Soft December Funding
With the Fed committed to dumping $500 billion in liquidity into the market over year-end, there WILL be an abundance of cash overall. More cash will be added than will actually leave the market. However, the Fed is adding much of this cash via term RP operations over the next two weeks, whereas most of the cash is only needed for the Turn itself. I predict, by the last week in December, overnight GC rates will trade very soft. Perhaps opening at 1.50% each day - though GC will have a hard time dropping below the 1.45% RRP rate.
Soft Year-End Funding
I believe the Turn rate will close soft on year-end. Probably below 1.00%. What will be even more interesting is that Money Market Funds will be "crowded out" by the Fed cash entering the market. When Primary Dealer banks take billions of dollars of cash from the Fed, they will give all of their collateral to the Fed. That will leave little collateral for banks to give to Money Market Funds on the day of quarter-end - forcing the MMFs to go to the Fed's RRP window. The Fed will effectively both loan cash into the market and borrow cash from the market.

Bottom line: after Pozsar's apocalyptic forecast prompted the Fed to unleash a liquidity tsunami, fears about an imminent seizure in the repo market have faded, with BofA's Cabana now writing that "overall, the Fed's guiding hand should make market participants comfortable not to fear material repo stress around the mid-Dec corporate tax date and to believe any year-end funding pressures should be relatively short lived."
Still, as Skyrm cautions, "there is still one major phantom year-end risk looming around the market. If the Fed's term RP operations fully fund the Primary Dealer bank balance sheets and the banks cannot increase their balance sheets further, the last few Fed operations of the month might not have any takers. There is a chance there will be little Primary Dealer bank balance sheet left by year-end."
In any case, when looking at tomorrow's massive $100 billion liquidity drain, the repo market should be able to digest it without a spike in the G/C repo rate now that the Fed has effectively backstopped any and all year-end liquidity needs. If, however, the first repo prints come in elevated: at 2% or higher, it will mean that not even the Fed's half a trillion dollar liquidity injection was enough, and that Pozsar's fire and brimstone forecast is starting to come true.
Posted by seemorerocks at 19:14