Criminal probe into the

investigation zeros in on

Obama's CIA director:
Prosecutor demands John O.
Brennan hand over his
private emails and call logs
to find out what he told
Comey and his thoughts on
the Steele dossier 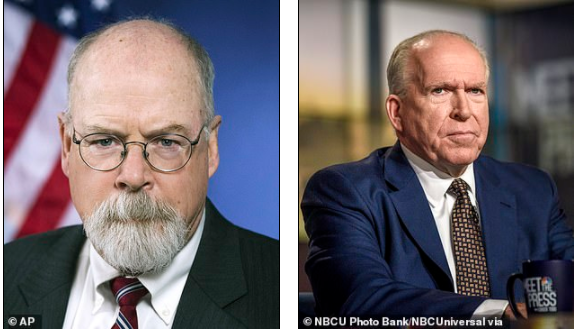 The federal prosecutor probing the origins of the government's Trump-Russia investigation is examining the role of former CIA director John O. Brennan and has requested his communication records.

U.S. Attorney John H. Durham, the top federal prosecutor in Connecticut, is investigating the origins of the FBI's investigation into Russia led by Attorney General William P. Barr in May.

At first the inquiry was an administrative review in October, but later turned into a criminal investigation.

Now Durham is honing in on the communications of ex-CIA Director Brennan by requesting his emails, call longs and other documents from the CIA, a source briefed on the inquiry said to the New York Times.

Durham wants to know what Brennan told other officials - including former FBI director James B. Comey - about his and the CIA's views of the dossier that first raised concerns about Russia and Trump associates.

That document, known as the Steele dossier, was a private intelligence report written from June to December 2016 that alleged misconduct, conspiracy and cooperation between Donald Trump's campaign in the 2016 election and the government of Russia.

Durham is also investigating whether Brennan privately contradicted his public comments, including statements made in his May 2017 testimony to Congress.

Brennan served as the director of the CIA from March 2013 to January 2017 under President Barack Obama.

During his time in office he was a harsh critic of President Donald Trump and in the end he was ungracefully booted from the White House when Trump revoked his security clearance.

In August 2016, Brennan said Trump's claim of no collusion with Russia was 'hogwash'.

At the moment Durham's investigation is ongoing and it's not clear what crimes, if any, have been discovered.

Donald Trump has tried to use the Justice Department to go after his perceived enemies and has alleged that Obama administration officials have been trying to sabotage his campaign since he entered office.

The Trump administration sees Durham's investigation as a potential way to prove those claims.

Defenders of Brennan say he did nothing wrong in his role and did the right thing in flagging and investigating Russian interference in the election.

In an interview with MSNBC in the fall Brennan said he'd cooperate fully with Durham's investigation.

'I feel good about what it is we did as an intelligence community, and I feel very confident and comfortable with what I did, so I have no qualms whatsoever about talking with investigators who are going to be looking at this in a fair and appropriate manner,' Brennan said.

Durham has led several high-profile investigations into allegations of wrongdoing in the CIA's detainee torture program.
He was appointed this year by Attorney General William P. Barr to re-examine the origins of the FBI Russia prove and more broadly how the U.S. government uncovered Moscow's election interference and responded to those findings.
'He is not just looking at the F.B.I. He is looking at other agencies,' Barr said in a broadcast Thursday evening.  'He is looking at all the conduct — both before and after the election.'
In January 2017 the intelligence community released a report culling information from the FBI, CIA, and National Security Agency on Russian meddling. That report concluded Russian president President Vladimir V. Putin ordered an influence campaign to damage Hillary Clinton's presidential campaign and boost Trump's.
Barr has previously expressed his doubts over whether the FBI even had enough information to launched that inquiry in 2016.
Read more:


Meanwhile, Jimmy Dore has been censored 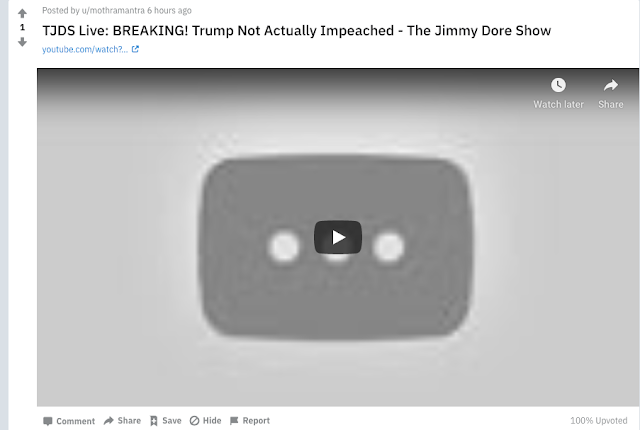 Now that the House of Representatives has voted to impeach President Donald Trump, what is the constitutional status of the two articles of impeachment? Must they be transmitted to the Senate to trigger a trial, or could they be held back by the House until the Senate decides what the trial will look like, as Speaker Nancy Pelosi has hinted?

The Constitution doesn’t say how fast the articles must go to the Senate. Some modest delay is not inconsistent with the Constitution, or how both chambers usually work.

But an indefinite delay would pose a serious problem. Impeachment as contemplated by the Constitution does not consist merely of the vote by the House, but of the process of sending the articles to the Senate for trial. Both parts are necessary to make an impeachment under the Constitution: The House must actually send the articles and send managers to the Senate to prosecute the impeachment. And the Senate must actually hold a trial.

If the House does not communicate its impeachment to the Senate, it hasn’t actually impeached the president. If the articles are not transmitted, Trump could legitimately say that he wasn’t truly impeached at all.

That’s because “impeachment” under the Constitution means the House sending its approved articles of to the Senate, with House managers standing up in the Senate and saying the president is impeached.

As for the headlines we saw after the House vote saying, “TRUMP IMPEACHED,” those are a media shorthand, not a technically correct legal statement. So far, the House has voted to impeach (future tense) Trump. He isn’t impeached (past tense) until the articles go to the Senate and the House members deliver the message.

Putting these three different provisions together yields the conclusion that the only way to remove the president while he is in office is if the House impeaches him and the Senate tries and convicts him.

The provisions say nothing about timing. Taken literally, they don’t directly say that articles of impeachment passed by the House must be sent to the Senate. But the framers’ definition of impeachment assumed that impeachment was a process, not just a House vote.

Strictly speaking, “impeachment” occurred – and occurs -- when the articles of impeachment are presented to the Senate for trial. And at that point, the Senate is obliged by the Constitution to hold a trial.

What would make that trial fair is a separate question, one that deserves its own discussion. But we can say with some confidence that only the Senate is empowered to judge the fairness of its own trial – that’s what the “sole power to try all impeachments” means.