Will Be First To Feel Impact:

At a moment Erdogan has his hands dirty in Syria and is preparing to get more militarily involved in Libya, Turkey's president has yet again threatened Europe with a refugee horde so large no country will be able to handle it. He's now specifically threatened Greece as being among the first to bear the brunt of the first waves of refugees unleashed by Turkey.
His threats are now centering on the major uptick in airstrikes by Russia and Syria on Idlib province, said to number in the "hundreds" since a new operation began on Dec.16. Since then, tens of thousands of civilians living under al-Qaeda's Hayat Tahrir al-Sham (HTS) have reportedly fled.
"Turkey cannot handle a fresh wave of migrants from Syria, President Tayyip Erdogan said on Sunday, warning that European countries will feel the impact of such an influx if violence in Syria’s northwest is not stopped," Reuters reports.

Common estimates now put the number of Syrian refugees hosted on Turkish soil at 3.7 million, with another 3 million inside war-torn Idlib province, which means the refugee crisis is set to explode dramatically higher in terms of numbers — a likely scenario given Damascus has vowed to return "every inch" of Idlib and all Syrian territory to its control.
Thus far thousands have fled into neighboring Turkey, but there's been on the ground reports suggesting HTS militants are blocking the bulk of refugees from leaving, perhaps using them as 'human shields' amid the Russian-Syrian onslaught.
During a public speech in Istanbul on Sunday night, Erdogan claimed over 80,000 people were currently fleeing Idlib for the safety of Turkey, and repeated his urgent appeal for Europe to give additional support. 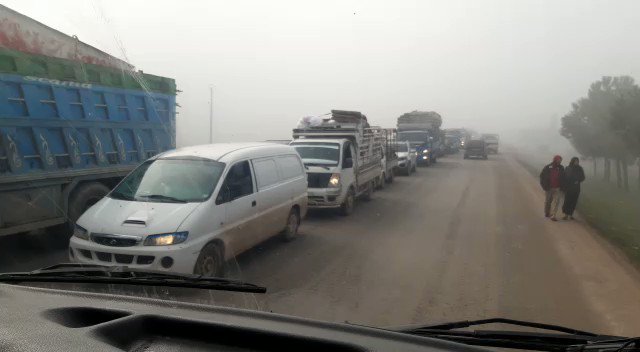 37 people are talking about this
“If the violence toward the people of Idlib does not stop, this number will increase even more. In that case, Turkey will not carry such a migrant burden on its own,” Erdogan said.
And he named Greece while invoking the peak of the migrant crisis in 2015, promising a "repeat" if nothing is done:

“The negative impact of the pressure we will be subjected to will be something that all European nations, especially Greece, will also feel,” he said, adding that a repeat of the 2015 migrant crisis would become inevitable.

“We call on European countries to use their energy to stop the massacre in Idlib, rather than trying to corner Turkey for the legitimate steps it took in Syria,” Erdogan said, referencing the Turkish army's own ongoing 'Operation Peace Spring' against US-backed Syrian Kurds.
Erdogan further called the some $3 billion in support offered by the United Nations refugee agency last week "not enough". 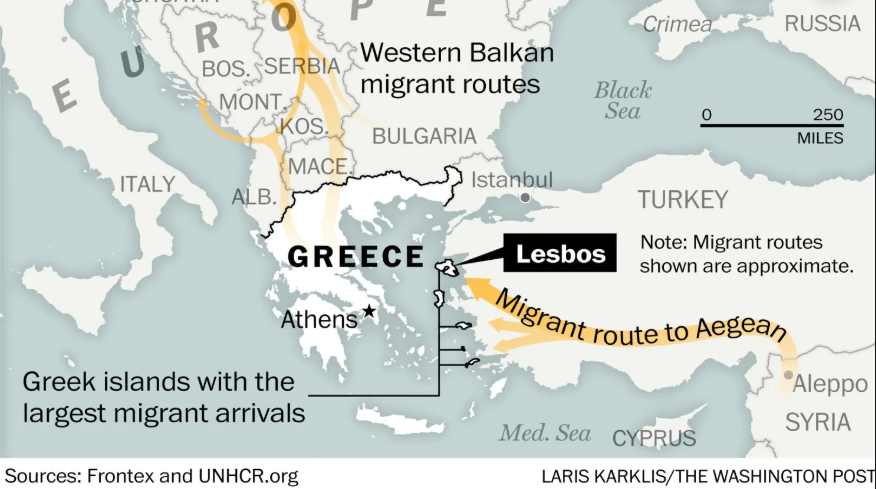 As for Erdogan's targeting Greece in his latest remarks, this comes amid Turkey's new jostling to secure oil and gas exploration and drilling rights across a broad swath of the eastern and southern Mediterranean, especially following a contentious deal with Libya's GNA in Tripoli.
Greek sources: Foreign Minister Nikos Dendias traveled to Benghazi, Libya, on Sunday, where he met with the head of the Libyan National Army, General Khalifa Haftar, according to a ministry statement. 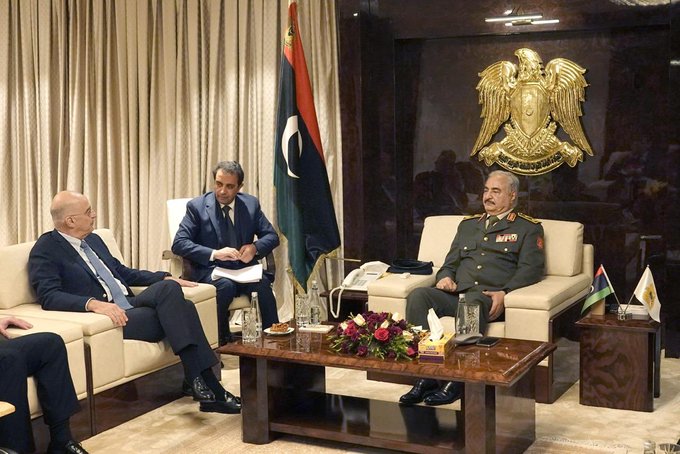 86 people are talking about this
Athens is reportedly preparing to formally recognize Gen. Khalifa Haftar's Benghazi-based administration as the official government of Libya, at a moment he and Turkey are in direct open war with each other, given Ankara is said to be shipping more military supplies and possibly even troops to help repel his ongoing offensive against Tripoli. Turkey is the closest military supporter to the UN-recognized government in Tripoli, despite the UN-led arms embargo in place (which no one seems to be abiding by).
Greece has also vowed to thwart Turkish exploration and drilling vessels from traversing its waters to enter disputed maritime regions off Libya.
Thus with Athens now more closely embroiled in the emerging maritime dispute involving Turkey, Cyprus, Libya and Egypt, Erdogan has all the more reason to target Greece with threats of flooding the islands with migrants — as happened in 2015, and which has been a steady stream of new arrivals ever since. 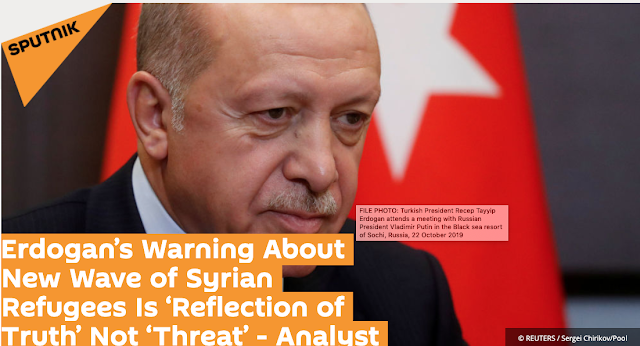 Turkish President Recep Tayyip Erdogan’s comments about a new wave of incoming migrants from Syria to Europe should not be seen as a threat to the EU or other partners but as “simply a reflection of the truth,” political analyst and journalist Klaus Jurgens suggested.
The warning from Erdogan came during an award ceremony late Sunday, when the Turkish president suggested that if the violence in the region does not stop, the number of refugees would increase even more and “in that case, Turkey will not carry such a migrant burden on its own.”

“Turkey carries the biggest burden with regards to refugees and has become indeed a humanitarian role model in this context,” Jurgens said. “As Turkey wishes to continue to establish a viable, permanent safe zone and thus greatly helps to stop bloodshed and aims at erasing terrorism from this part of the region, of course if Turkey is a stand-alone actor in this regard and many international actors turning a blind eye, even Turkey has a right to say that another massive wave of incoming refugees fleeing from a war that other actors, not Turkey, continue to stage, is reaching its absorption limits. The Turkish population is the most welcoming nation but it is only natural that at some point absorption capacity limits will have been reached.”

Turkey currently hosts nearly 3.7 million registered Syrian refugees and has previously warned Europe that it could no longer bear the brunt of the conflict. The Humanitarian Relief Foundation, a Turkish aid group, on Monday reported that the number of people fleeing the violence and heading to Turkey had reached 120,000.
As part of an agreement with the EU, Turkey has actively prevented Syrian refugees from attempting the perilous journey to Greece in exchange for financial support. Earlier in October, Erdogan had accused Brussels of failing to deliver on the deal. He said Turkey still expects the promised €6 billion ($6.6 million) after EU Budget Commissioner Günther Oettinger had suggested that the bloc should wind down its humanitarian payments to Turkey with respect to Syrian refugees and transfer money to Jordan and Lebanon instead.

“Ankara and Moscow, and to a certain extent Damascus must exchange clear views about what to do next and hopefully come to a solution that enables lasting peace benefiting the peoples of the region comprised of so many different backgrounds yet all wishing for just that one thing: peace! The EU would be well advised to better understand the tension currently visible in this volatile region,” he added.

More than 300,000 people have been killed and millions more displaced by the Syria conflict, now in its ninth year. On 31 August 2019, Russia, Turkey and Iran became ceasefire guarantors in conflict-ridden Syria. Russia regularly carries out humanitarian operations across the country and helps Damascus in providing safe passage for the return of Syrian refugees. However, the ceasefire has been violated several times and fighting has intensified since 1 December. The latest violations were registered on 24 December, according to the Russian Defence Ministry, counting 55 truce breaches in the country over the past 24 hours, including 21 violations in the north-western province of Idlib bordering Turkey.