Top NZ scientists on the effects of the heatwave

If I had to unpack this I'd summarise it thus: "this heatwave is damaging, far beyond anything we might have imagined but don't worry – it will get a little hotter in the next 80 years.

James Renwick was the one who attacked Guy McPherson and said polar ice melt in the  Arctic was in a different part of the world (so presumably, according to him, doesn't matter)

What the heatwave is actually doing to New Zealand 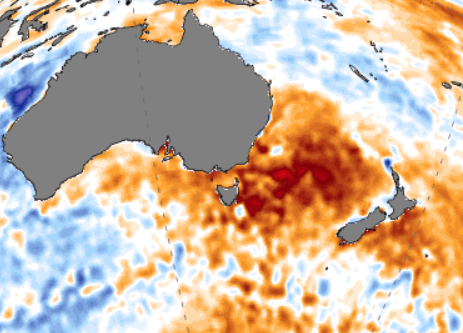 Jim Salinger and James Renwick for The Conversation

As the Australian heatwave spills across the Tasman pushing up temperatures in New Zealand, we take a look at the conditions that caused a similar event last year and the impacts it had.

Last summer's heatwave gave New Zealand its warmest summer and the warmest January on record.
It covered an area of four million square kilometres (comparable to the Indian subcontinent), including the land, the eastern Tasman Sea and the Pacific east of New Zealand to the Chatham Islands.
In our research, we looked at what happened and why, and found that the heatwave affected many sectors, leading to early grape harvests and killing farmed fish in parts of the country.

Drivers of warmer than average conditions

We used a combination of land and ocean temperature observations, large-scale analyses of the atmospheric circulation, and ocean modelling to understand the drivers of the 2017/18 summer heatwave.
It was memorable for a number of extreme events and statistics.
The average air temperature was 2.2degC above the 1981-2010 normal of 16.7degC, and it was the warmest summer ever recorded in more than 150 years.
The number of extreme warm days and warm nights was also the highest recorded, going back several decades.
The peak month was January 2018, 3.2degC above normal and the warmest month recorded in observations as far back as 1867.
Ocean surface temperatures were similarly extreme, with a marine heatwave that lasted about five months, at 2.0degC above normal at its peak.

The warming was mostly the result of very settled conditions over the country, especially to the east, bringing light winds, plenty of sun, and warm air from the subtropics.
Such conditions in summer are associated with the positive phase of a polar ring of climate variability known as the Southern Annular Mode (SAM), which brings high pressures (anticyclones) to New Zealand and parts of other southern hemisphere countries in the mid-latitudes, including southern Australia and Tasmania, southern Chile and Argentina.

The SAM was strongly positive throughout last summer, especially in January, and weak La Niña conditions were prevalent in the tropics.

The light winds in the New Zealand region allowed the ocean surface to warm rapidly, without the usual turbulent mixing to transport the heat away.
The warmest waters in the Tasman Sea formed an unusually thin layer near the surface.

New Zealand was affected by more than its normal share of ex-tropical cyclones, notably Fehi and Gita.

They brought strong winds, storm surges and heavy rainfalls that caused flooding as they passed through.

The warm ocean waters around New Zealand would have helped maintain the intensity of the storms and supply moisture to drive the heavy downpours.
The warm conditions caused massive ice loss in South Island glaciers, estimated to be the largest annual loss of glacier ice in nearly 60 years of records for the Southern Alps.
Satellite data from end-of-summer snowline measurements at the Tasman Glacier suggest that the Southern Alps lost 9 percent of glacier ice during last summer alone.
Warm air temperatures had a marked effect on managed and natural ecosystems. The Marlborough grape harvest was unusually early in 2018, two to three weeks ahead of the normal maturation time. Marine ecosystems were significantly disrupted.

For the first time, Atlantic salmon had to be imported as farmed fish died in salmon farms in the Marlborough Sounds.

Commercial fishers reported that snapper was spawning approximately six weeks early off the South Island coast, and Queensland groper was reported in northern New Zealand, 3000km out of range.

The summer of 2017/18 shared some characteristics with another hot summer, way back in 1934/35. That season was so warm that it prompted a special report by the New Zealand Meteorological Service.
Conditions were similar: persistent high-pressure systems in the New Zealand region, positive SAM conditions, light winds over and around New Zealand, warm ocean surface and air temperatures.
While those two summers shared some natural variations in the local climate, the recent summer was warmer for two reasons.
First, climate in the region is now more than half a degree warmer now than in the 1930s.
Second, the SAM has been trending towards its positive phase over the last few decades, making settled conditions over New Zealand more frequent now than in the 1930s.

That trend is mostly related to the ozone hole that occurs in spring and early summer, cooling the polar atmosphere and driving the strongest winds farther south towards Antarctica, leaving lighter winds and higher pressures over New Zealand.

Looking to the future, we can compare the conditions experienced in 2017/18 with what climate models predict for the future.
We estimate that the extreme warm conditions of New Zealand's last summer would be typical summer conditions by the end of the century, for an emissions scenario associated with a couple of degrees of global warming above pre-industrial temperatures.
If emissions keep increasing as they have done in recent years, last summer will seem cool by the standards of 2100.

A discussion with Guy McPherson on James Renwick