At present the temperature in Lower Hutt is 25 degrees Celsius, which is, more or less what it has been for some weeks. It has not gone above that but temepratures have not gone below the 20’s very much, especially at night. It is the persistantly higher temperatures that I have been noticing.

To give an idea of what we might expect - the previous average maximum has almost become the minimum. 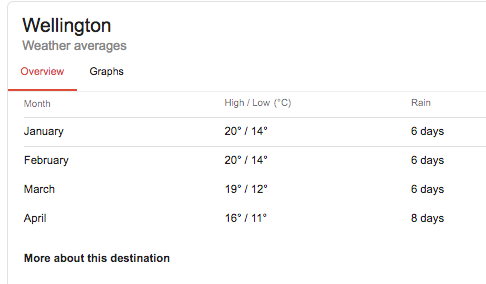 Aussie heatwave arrives with scorching temperatures into the 30s 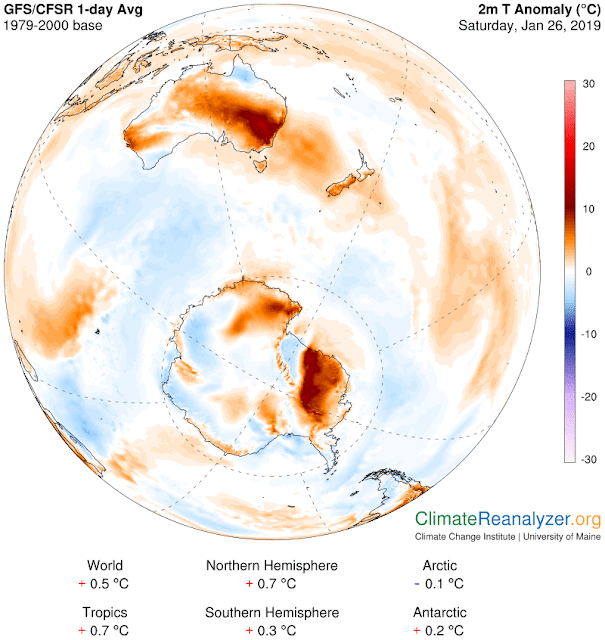 Scorching temperatures into the 30s will hit parts of New Zealand today as hot air crosses the Tasman that saw oven-hot records set in Australia.

At the top of the South Island, Blenheim is set to bake today in 35C and Christchurch will sizzle in 30C.

Other red-hot temperatures are forecast in the North Island where the mercury at the east coast cities of Hastings and Gisborne is forecast for 32C and 30C respectively.

The heatwave comes as new research on the merits of preventing sun damage finds people should apply sunscreen every day.

MetService is forecasting many areas, especially in the east, would see consecutive 30C days from today through to the end of the working week.

Other maximum temperatures expected in parts of the North Island today will be 25C in Auckland and Hamilton, 26C in Thames and 27C in Whāngārei.

In the South Island, Queenstown is set for 28C, while Dunedin escapes with a much cooler 22C.

The City of Sails is continuing a cracker Auckland Anniversary Holiday weekend with clear skies and temperatures rising to a forecast high of 25C - perfect to see the performers at the International Buskers Festival around the Viaduct.

By lunchtime the temperature will be well into the 20s.

People heading out for the many outdoor events today and at tomorrow's Laneway Festival are advised to use ample amounts of sunscreen, drink plenty of water and keep in the shade where possible. A high of 26C is forecast tomorrow 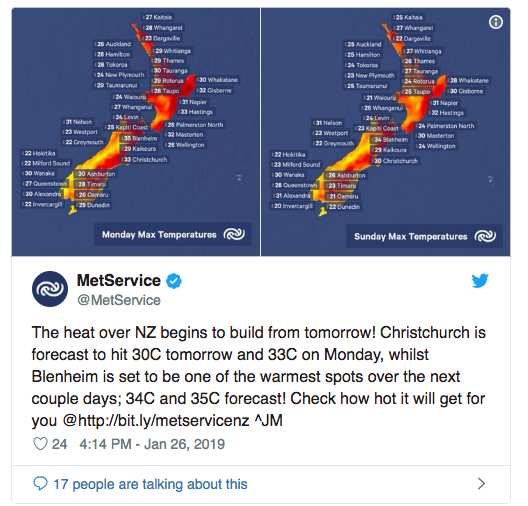 MetService meteorologist Ravi Kandula said: "Essentially, a lot of the heat is going to be confined to the South Island, central parts of Otago - high 20s to the low 30s - Blenheim and Kaikōura.

As well as needing a swim and an icecream, the heat could lead to more serious issues in the coming days. On Friday, the tar on State Highway 1 near Pūhoi, north of Auckland, started to melt.

MetService said a heatwave was defined by the World Meteorological Organisation as five or more days in a row of 5C above the average temperature.

An article published in the Australian and New Zealand Journal of Public Health on Friday said there was now clear evidence on the benefits of daily sunscreen use.

QIMR institute professor Rachel Neale, who co-led the research article, said incidental exposure to the sun happened daily, from activities like walking to the bus stop.

"In recent years, it has become clear that the DNA damage that causes skin cancer and melanoma accumulates with repeated small doses of sunlight.

"The advice is now simple: make sunscreen part of your morning routine, just like brushing your teeth."

While many of the findings were related specifically to Australia, the advice was also applicable to New Zealand.

Craig Sinclair, the Cancer Council Australia's prevention adviser, said adoption of this advice could lead to a reduction of skin cancer rates in the future.

Another worrying thing that cropped up from the research was that nearly half of Australians believed sunscreen could not be used safely on a daily basis.

Dr Stephen Shumack from the Australasian College of Dermatologists said it was important people continued to use other forms of sun protection, if planning on spending longer periods of time outdoors.

"People need to remember that sunscreen isn't a suit of armour," he said.

"If you're planning outdoors activities – like playing or watching sport, going fishing or working outdoors – you should also seek shade, wear a hat, protective clothing and sunglasses, and reapply your sunscreen every two hours."

New Zealand has the world's worst rates of deaths from malignant skin melanoma at 6.6 per 100,000 people - around six times the global average. 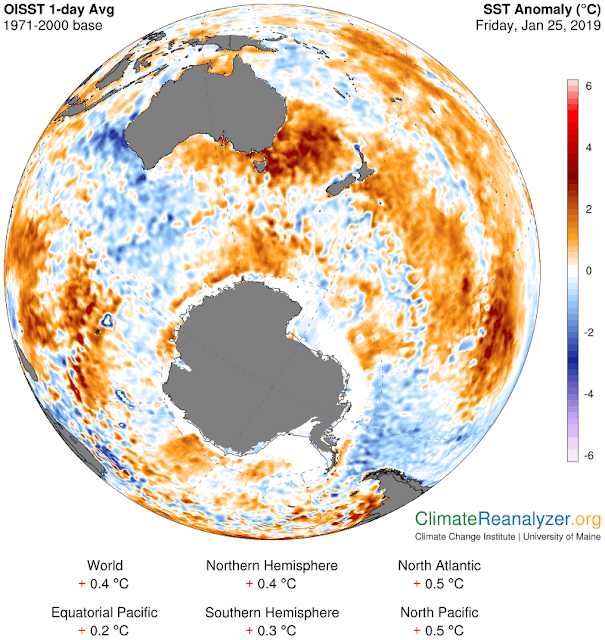