Green Party leader, James Shaw does not think there is a climate emergency 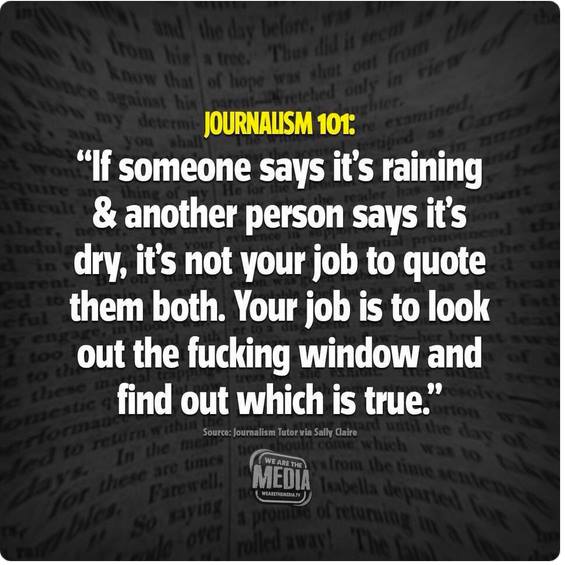 All of this throws me back to 2011 to about a year before I was involved in reporting on abrupt climate change.

I remember a discussion with a Green Party boffin named Nigel T on Peak Oil. He was dead against the Green Party taking a position on Peak Oil because,Nigel contended every message they put out has to be "90% positive" - otherwise the public won't vote for it:

He even cited a bit of (pseudo) - "scientific research" ti back up his outrageous claims.

Essentially, he was saying that Principle and Truth were out. So they could get the votes they had to put out a 'positive' message. It was all about "going mainstream"

It was an argument for lying to the public.

It may have brought the Green Party some recognition from the mainstream media and a few more votes but it destroyed absolutely everything the Green Party stood for in my mind. But it also marked the day the NZ Green Party and I parted company.

Here are the comments from Nigel T. to a blogpost of mine from 2011.

Its a shame when people that seem to be able to look at the world with both eyes, still produce one-eyed rants if the evidence does not suit their preconceptions.

If you want peak oil and climate change to be mainstream issues, then you must bring them into the mainstream.

You cannot bring issues into the mainstream as a political party if you are marginalised and ineffective.

Please open your other eye and think critically and strategically. If you can think about this from another perspective you might even learn something.

You may even be able to help, rather than offering one-eyed rants.
***
As a political vehicle for these issues, the Green Party's job is to take these issues into the mainstream, and they are following solid science in order to do this.

We are in the unsustainable position we are in because too many people deny science when it is available to us, yet your position here also denies available science.

In the area of climate change, amidst the denial and hypocritical nonsense of all the parties in Parliament the Greens in coalition do not stand out at all. They are just as conservative as anyone in the political sphere.

In fact, it all reeks of hypocrisy.

I am not an insider so I don't know what the Greens have been doing since the Coalition came to. power.  The answer is practically nothing.

We have a Green Minister of Climate Change which, one would think might be something to celebrate.

I do know that James Shaw,  when it comes to to climate change (especially in the context of a marine heatwave and extremely hot weather) he is missing-in-action.  You would think that as a Minister he might have more access to the media in educating the public  but there has been silent.

A couple of anecdotes that have come my way indicate just how bad the Greens in power have been.

Last winter we had dinner with the brother of a friend of ours, a New Zealander based in the EU. He is working on a long-term project on a "super-grid" and has had high-level contacts, not only in the EU but in China and India where he met with the Minister of India.  When he came to New Zealand he approached the Green Party for a meeting and as he expressed it, couldn't even get an appointment with the janitor.

I have heard another similar story where a local friend could not get any change on a conservation project he was working on. He singled out the Greens for being particularly unhelpful on something that should have been up their alley.

Here, first, is an article from late last year: 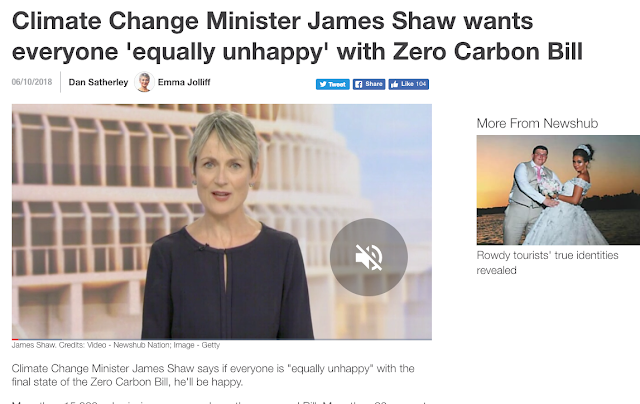 ....The Bill won't be a partisan push. After all, as Mr Shaw points out, it was a National-led Government that signed New Zealand up to the Paris Agreement, which commits New Zealand to reducing our greenhouse gas emissions to 30 percent below 2005 levels by 2050.

"We are talking through the detail of the targets between the Government and the Opposition as we negotiate the final form of the Bill," said Mr Shaw.
"I have a view, but there are options that are in front of us and we are talking through the detail of how we do that. I think the thing that people are going to have to realise is that it's going to involve some compromise from everyone. No one is going to get everything that they want as a result of this process… As long as everyone's equally unhappy, we have a chance of getting this over the line."
But it turns out ex-Green Party leader and Greenpeace NZ executive director Russel Norman disagrees with Shaw's approach.
"Do you really want climate policy in New Zealand to be hostage to the backbenches of the National Party?
"You think about the nuclear-free - did we go, 'Oh let's all sit with our hands together and kumbaya, that's how we'll get nuclear free?' No. The Government took a strong lead and eventually National came in behind and admitted it had to follow.
"Government took leadership, we took a strong position on it. Climate change is the same. This is too important to water down to some kind of commission that has no powers, doesn't even affect all gases."

Here is James Shaw singing lavish praise on the  National's praises on the 2016 Paris agreement. 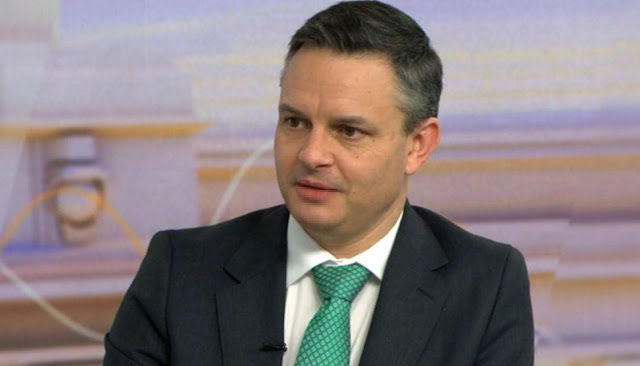 Here is the correspondence between Kevin and Shaw (not in chronological order:

RE: My critique of the Greeens climate policy and failure to declare a climate emergency

Dear James,
I assume you have had time to digest the latest watered down prognosis from the ultra-conservative IPCC who say we have 12 years to address the climate crisis when the UN said we had 10 yrs in 1989. Someone is either lying or can’t do math.

Paul Beckwith from the University of Ottawa was my guest on my radio show Nature Bats Last and he has also been advocating for the declaration of climate emergency for some time.
https://kevinhester.live/2018/10/06/climate-system-scientist-paul-beckwith-the-case-for-declaring-a-global-climate-emergency/

Climate scientist and go to guy for the corporate press Michael Mann has been caught out lying that 1.5C is still achievable. Quoting his position now is irresponsible in the extreme;
https://kevinhester.live/2018/08/08/scientific-mal-practice-from-the-mann-himself/

Winning slowly is the same as losing, not facing the multitude of crises we face is dereliction of duty.

What would it take for you to see an emergency?

I assume you have had time to digest the latest watered down prognosis from the ultra-conservative IPCC who say we have 12 years to address the climate crisis when the UN said we had 10 yrs in 1989. Someone is either lying or can’t do math.

Paul Beckwith from the University of Ottawa was my guest on my radio show Nature Bats Last and he has also been advocating for the declaration of climate emergency for some time.

Climate scientist and go to guy for the corporate press Michael Mann has been caught out lying that 1.5C is still achievable. Quoting his position now is irresponsible in the extreme;

Winning slowly is the same as losing, not facing the multitude of crises we face is dereliction of duty.

What would it take for you to see an emergency? 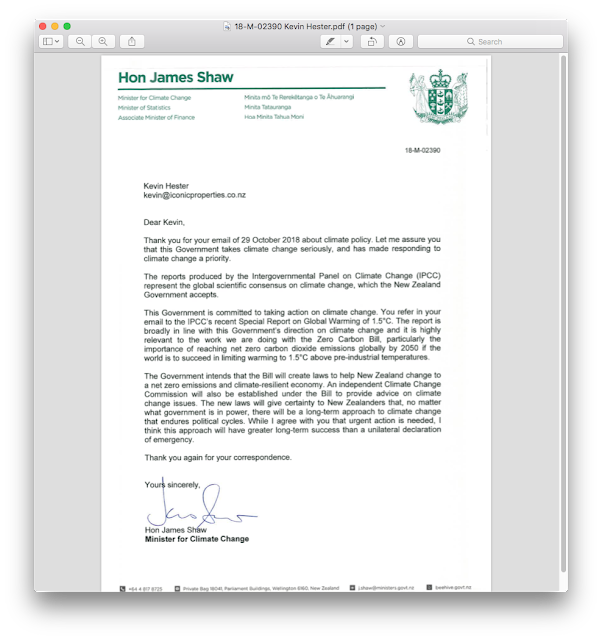 Here is the text:

The reports produced by the Intergovernmental Panel on Climate Change (IPCC) represent the global scientific concensus, which the New Zealand government accepts.

The Government is committed to taking action on climate change. You refer in your eamil to the IPCC’s recent Special Report of Global Warming of 1.5C. The report is broadly in line with this Government’s direction on climate change and it is highly relevant to the work we are doing with the Zero Carbon Bill, particularly the importance of reaching net zero carbon dioxide emissions globally by 2050 if the world is to succeed in limiting warming to 1.5C above pre-industrial temperatures.

The Government intends that the Bill will create laws to help New Zealand change to a net zero emissions and climate-resilient economy. An Independent Climate Change Commission will also be established under the Bill to provide advice on climate change issues. The new laws will give certainty to New Zealanders that, no matter what government is in power, there will be a long-term approach to climate change that endures political cycles. While I agree with you that urgent action is needed, I think this approach will have greater long-term success than a unilateral decalration of emergency.

Thank you again for your correspondence,

A Critique of The Green Party of Aotearoa N.Z. Climate Change Policy.

There is no truth coming from any political parties or even politicians within parliament. And given what they know the biggest treachery is that of the Greens.

Looking back, I have my doubts that any "remedies" would have worked given the nature of the problem (sorry - that word is totally inadequate).

Kevin calls for the announcement of a "state of emergency".

I have a slightly different approach.

I would be calling for a state of Predicament. 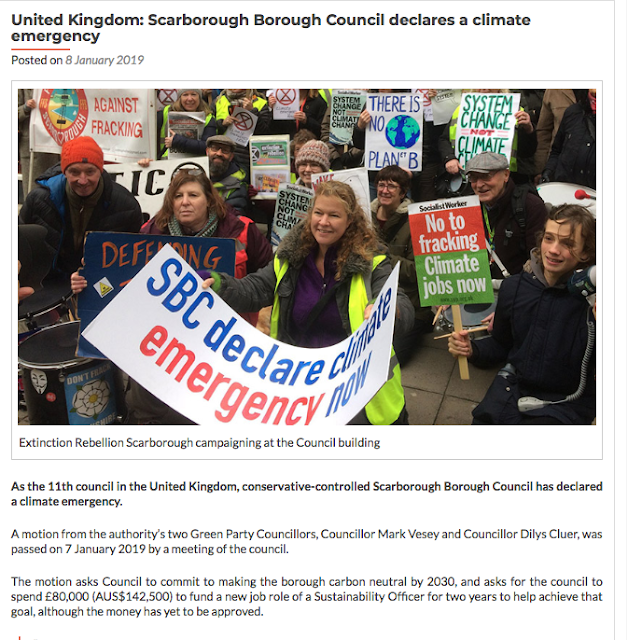 I find myself in a quandary when it comes to the Extinction Rebellion.   These people, in addition to being justifiably angry about decades of inaction but they are wanting action, now.  But there is no action possible at this late stage and I don't know how to communicate this to enthusiastic young people who should have their entire lives in front of them.

Was there ever any possibility of averting this course of events?

During the time of  Helen Clark government the Green Party espoused a carbon tax but gave this away during political negotiations for a policy on the carbon emission trading scheme which has to be the most corrupting and self-serving responses that I can think of.

In hindsight the Green Party should have stuck to its guns on a carbon tax. If a carbon tax had been introduced it might just have made a difference (although probably not) - especially if it was along the lines of that advocated by James Hansen (with benefits accruing to ordinary citizens).

When I think more clearly I can see that global heating is part and parcel of human civilisation which is a heat engine.

Nothing could confirm all of the above than this article that has come out today written by Donna Awatere-Huata, a former high-wing ACT Party member of Government that is far more radical and hard-hitting than anything I have read from liberals - including the Green Party.

Donna Awatere Huata – Is Jacinda’s ‘Nuclear-free moment’ on climate change nothing more than a bumper sticker? 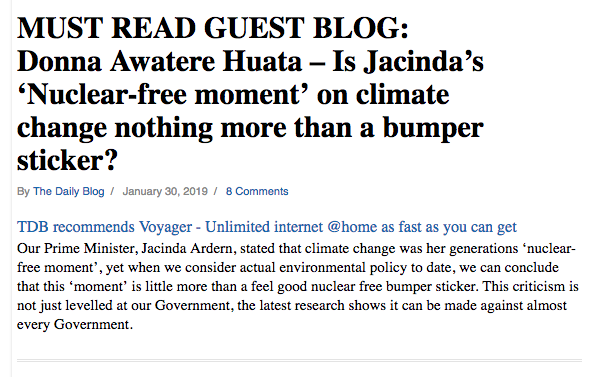 Our Prime Minister, Jacinda Ardern, stated that climate change was her generations ‘nuclear-free moment’, yet when we consider actual environmental policy to date, we can conclude that this ‘moment’ is little more than a feel good nuclear free bumper sticker. This criticism is not just levelled at our Government, the latest research shows it can be made against almost every Government. 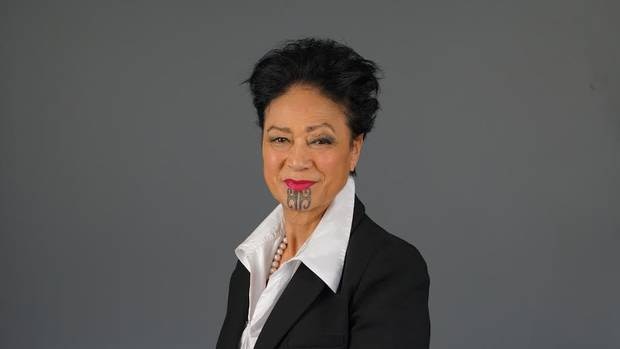 Further to our on-going discussions regarding the criminal negligence of James Shaw MP and the coalition government’s denial of abrupt climate change, I’d like to draw your attention to my blog post on the fact that the IPCC target of limiting warming to a 2C maximum is both impossible and not safe;https://kevinhester.live/2016/06/05/the-myth-of-2c-being-safe-and-achievable/comment-page-1/

The IPCC has been corrupted by the political process, Minister Shaw is blindly following them and is complicit in allowing our country to sleep walk over the cliff and into extinction.
https://kevinhester.live/2017/05/18/survivable-ipcc-projections-based-on-science-fiction/

More details on my abandonment for the Green Party of Aotearoa below
https://kevinhester.live/2016/10/28/a-critique-of-the-green-party-of-aotearoa-n-z-climate-change-policy/

Posted by seemorerocks at 15:18