The truth behind Venezuela's collapse

Emersberger analyses the recent article by government critic Francisco Rodriguez, in which Rodriguez admits that US sanctions are "misguided" and have a damaging effect on the Venezuelan people in general. 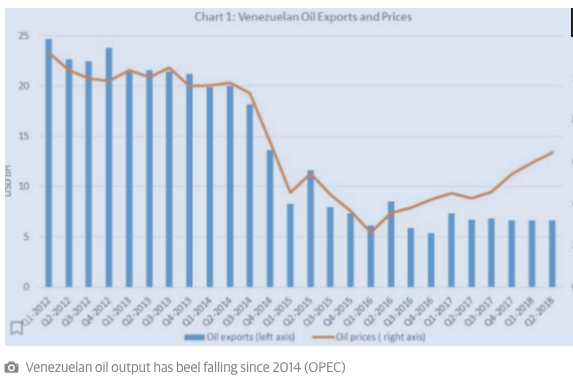 Rodriguez is well-known as an outspoken critic of the Maduro government, but in his recent article he recognizes that Washington’s “misguided” sanctions are exacerbating falling oil production in Venezuela and as such, pejoratively affecting general living standards.

The resulting loss of access to credit appears to have helped precipitate the collapse in oil output, driving the resulting economic contraction.

Our point is that the spilling over of this political crisis into the arena of finance had consequences for the country’s economy and for the living standards of Venezuelans,

Despite problematic comparisons between Venezuela and Iraq and Syria and charged anti-government rhetoric, Rodriguez presents a coherent economic argument against US sanctions which, amongst other things, block international payments.

I argue that Venezuela’s economy has imploded because it can’t import.

Finally, Rodriguez deconstructs Washington’s argument that the sanctions only impact high-ranking figures in the Venezuelan government, claiming that:

Advocates of sanctions on Venezuela claim that these target the Maduro regime but do not affect the Venezuelan people. If the sanctions regime can be linked to the deterioration of the country’s export capacity and to its consequent import and growth collapse, then this claim is clearly wrong.

Venezuelanalysis team.
Venezuelan economist Francisco Rodriguez, a longtime critic of the Venezuelan government, wrote a piece showing that after sanctions Trump introduced in August of 2017 Venezuela’s oil production dropped much faster than analysts had predicted it would. Rodriguez was the economic advisor to former presidential candidate Henri Falcon, who defied US threatsto run in Venezuela’s presidential elections that were held in May despite the boycott of other opposition leaders.

Below is the key graph Rodriguez provides. 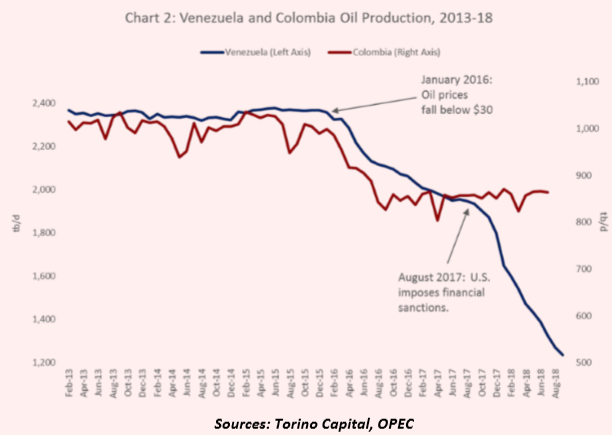 Venezuelan oil production followed essentially the same pattern as Colombia’s during 2016 and most of 2017 –until August when Trump’s sanctions came into force. A decline in production was driven by the price of oil hitting its lowest point in about a decade at the start of 2016. But in August of 2017 Trump’s sanctions made it illegal for the Venezuelan government to obtain financing from the US which was devastating for two reasons: all the Venezuelan governments’ outstanding foreign currency bonds are governed under New York state law; and one of the Venezuelan government’s major assets, the state-owned CITGO corporation, is based in Texas. The sanctions also blocked CITGO from sending profits and dividends back to Venezuela (which had been averaging about $1 billion USD per year since 2015).

The table below shows my estimate of Venezuela’s oil revenues each month since Trump’s sanctions came into force. The price of WTI oil (which approximates the price of Venezuela’s) basically increased linearly since August of 2017 from $50 to about $70 per barrel. The oil production volumes are taken from the estimates Rodriguez has provided. In the “no sanctions” case show below, it is assumed that Venezuela‘s oil production would have continued to fall at the same rate as in the 12 months before Trump’s sanctions. Rodriguez cited a “worst case” prediction made by a prominent oil consultant that a 13% decline in production would take place in 2017 followed by a 6% decline in 2018. The “no sanctions” case shown below is close to that “worst case prediction”. It assumes an 11% decline would have taken place. In reality (i.e. the “sanctions” case) production has fallen by 37% since the sanctions were imposed. The difference in total revenue between the “sanction” and “no sanctions” case over the twelve month period is about $6 billion.

That sum, $6 billion, is 133 times larger than what the UNHCR has appealedfor in aid for Venezuelan migrants. It is also equal to about 6% of Venezuela’s GDP at present. Health care spending in Latin America and the Caribbean averages about 7% of GDP.

Perversely, Maduro’s government has been widely accused of “using” the economic crisis to “buy” loyalty of the most vulnerable through the direct delivery of food and other basic products. Trump’s goal is clearly to starve the government of funds it uses to allegedly “buy support” (i.e. respond to the crisis).

Rodriguez pulls his punches and heavily qualifies his thesis, but the inescapable conclusion is that Trump’s policy is depraved. The US has deliberately made an economic catastrophe much worse in the hope that its Venezuelan allies can seize power through violence as they briefly did in April of 2002.

Rodriguez is correct to say that the “toxification” of dealing with Venezuela’s government, and the imposition of “reputational costs” on those who do so, is a huge factor in all this. The Western media has indeed demonized Venezuela‘s government for 17 years and has therefore reduced, almost to zero, the legal and moral constraints on the US and its allies. The priority for decent people whose governments have collaborated with Trump in attacking Venezuela should be to strengthen those constraints. The attacks could easily become even more barbaric.