The truth behind cirrus clouds

This is cirrus cloud at 5 pm in Lower Hutt, just hours after we saw the clearest examples of contrails together with cirrus  clouds that showed clear sings of having been beamed with EMF (or at least that is how its showed itself to us) 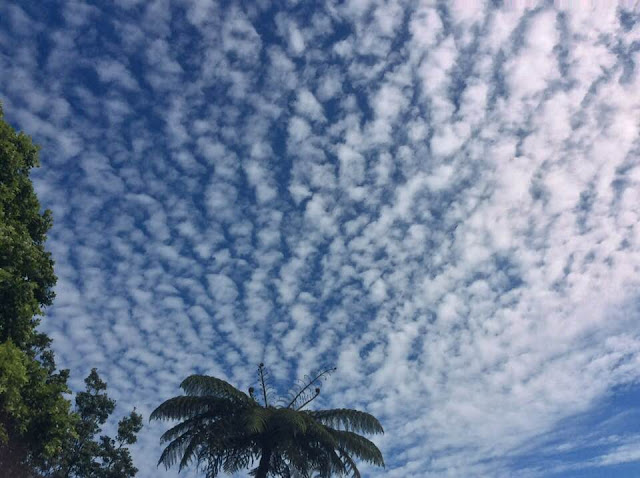 This phenomenon must have become so obvious that the Dominion Post (stuff.co.nz) felt it necessary to mention them and muddy the waters. 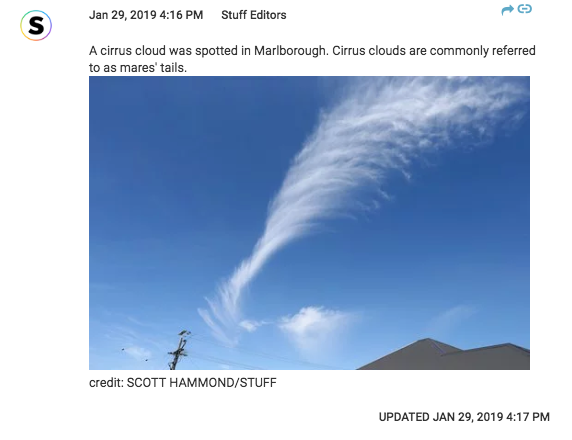 This is mostly the realm of conspiracy theory.

I am wanting to find credible sources on geeongineering and the creation of cirrus cloud.

I prefer the work of Jim Lee of climateviewer.com on this to Dane Wigington. His work is detailed and replete with evidence rather than the assumptions of people in the 'chemtrails' movement.

His view of the IPCC and the mainstream climate community is that they talk exclusively of CO2 (TRUE) and ignore water vapour. We already know how they ignore methane.

The following are some excerpts from an article - #CirrusCloudsMatter: The Shady Truth About Contrails


Looking into cirrus clouds
CirrusCloudsMatter: The Shady Truth About Contrails

How language controls the “chemtrail” debate

BOTH SIDES ARE WRONG.

Staunch chemtrail conspiracy fans are firm in the belief that:
Chemtrail Debunkers believe:
HERE ARE THE FACTS!
The term Artificial Cloud is the most accurate term as it cannot be argued with and is the lowest level descriptor.

The entire “chemtrail conspiracy” boils down to one thing: intent.

The problem with searching for intent is that it leaves people looking for a “smoking gun” or a “whistle blower” or a note from “the guy” who ordered planes to “spray” the world. This is actually a search for a “straw man” and likely designed to waste your time. If you want to end planes making clouds, all the evidence you need is in this article and all that is needed is proper protest at the FAA, EPA, and ICAO in my humble opinion.

Are “rogue geoengineers” intentionally spraying material to create clouds that cover the sky or is this just a dirty, unregulated industry doing what fossil fuel industries always do, polluting? Based on the evidence we can show that the military has intentions to use carbon black dust to modify the weather for warfare purposes, and commercial aviation produces tons of carbon black dust.

Due to the overwhelming amount of propaganda surrounding the topic of chemtrails, I have researched for more than three years to “clear the air” on chemtrails as a part of something I dubbed “Operation Clarity” and this is my final report. The information I present is based on information I have personally reviewed and is subject to change based on new evidence to the contrary.

“There are three sides to every story. Your side, his side, and the truth.”

Conspiracy believers claim that chemtrails are a secret program that do X, Y, and Z.

The truth is that artificial clouds are destructive to nature, harmful to health, and there is nothing “normal” about fire breathing metal tubes spewing nanoparticles at 30,000 feet.

Despite more than 60 years of jet aircraft “accidentally” geoengineering, scientists are now wanting to legalize global weather control. We must stop this, it’s time to get educated on how chemtrails work! 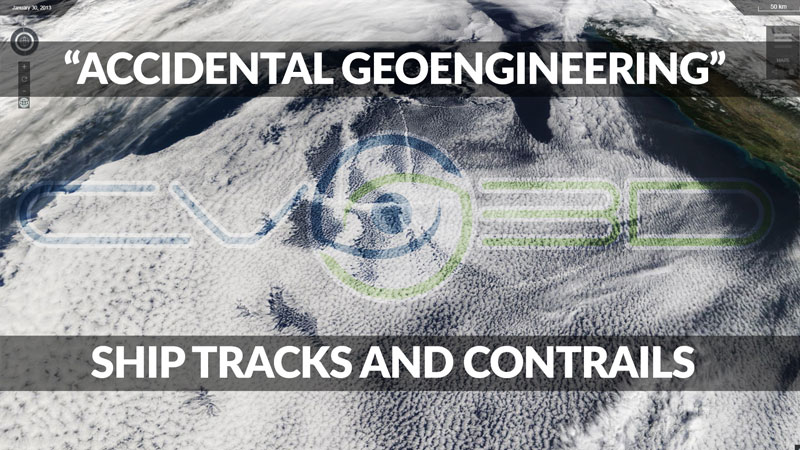 READ THE ARTICLE: “Accidental Geoengineering” with Ship Tracks and Contrails

Answer: Soot, sulfur, metal nano-particles, water vapor, and static electricity to make things stick. Carbon Black Dust (CBD) and Carbon Black Aerosol (CBA), also know as soot, is coated in sulfur and shoots out of the rear of a jet engine. Water sticks to these sulfur-coated soot particles and clouds form. Soot is a cloud condensation nuclei (CCN) and sulfur increases the likelihood of cloud formation. 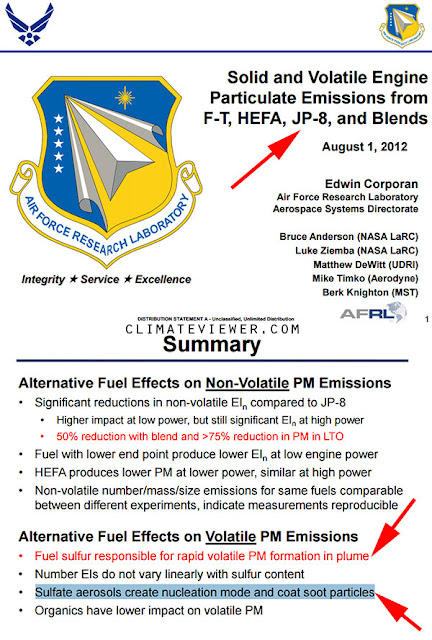 Are cirrus clouds a bad thing?

Yes, they create a Venus Effect by trapping heat, however the heating effect of chemtrails are seriously downplayed in atmospheric reports. It is no coincidence that the section covering contrails in the last IPCC report in 2007 was co-authored by at least five geoengineering SRM advocates. Their names are in bold:


The lead author of that report was Olivier Boucher, and his conclusion was that “large uncertainties associated with spreading rate, optical depth, ice particle shape and radiative transfer. A low confidence is attached to this estimate.” Four years later, Boucher made this statement:

“Contrails formed by aircraft can evolve into cirrus clouds indistinguishable from those formed naturally. These ‘spreading contrails’ may be causing more climate warming today than all the carbon dioxide emitted by aircraft since the start of aviation.” Boucher, O. Atmospheric science: Seeing through contrails, Nature Climate Change 1, 24–25 (2011) doi:10.1038/nclimate1078.

Are cirrus clouds melting the poles?

….Is it possible that chemtrails are intentionally heating the planet to melt polar ice? Despite the warnings of the COP21 agreement that we must not heat our planet by more than 1.5°C, there are no mentions of atmospheric water vapor at all. They are only focusing on CO2 and greenhouse gases even though back in 1966 these same governments acknowledged that water vapor would heat the planet my more than 1.5°C. To make matters worse, the USA and Russia are now attempting to drill for oil and gas in the arctic:
If there is a secret agenda behind chemtrails, melting the poles to extract oil and gas has to be at the top of the list.

Are cirrus clouds full of metal?

Aircraft jet engines also directly emit metal particles. Their sources include engine erosion and the combustion of fuel containing trace metal impurities or metal particles that enter the exhaust with the fuel (Chapter 7). Metal particles-comprising elements such as Al, Ti, Cr, Fe, Ni, and Ba-are estimated to be present at the parts per billion by volume (ppbv) level at nozzle exit planes (CIAP, 1975; Fordyce and Sheibley, 1975).

The fact that the IPCC’s estimates are based on 1975 research papers shows their lack of concern for metal particle pollution from planes. These two papers really break down the metals IN soot:

When jet aircraft switched from gasoline based fuel to kerosene (diesel) fuel the aluminum content of the fuels skyrocketed. See this chart Trace Element and Polycyclic Aromatic Hydrocarbon Analyses of Jet Engine Fuels: Jet A, JP5, and JP8: 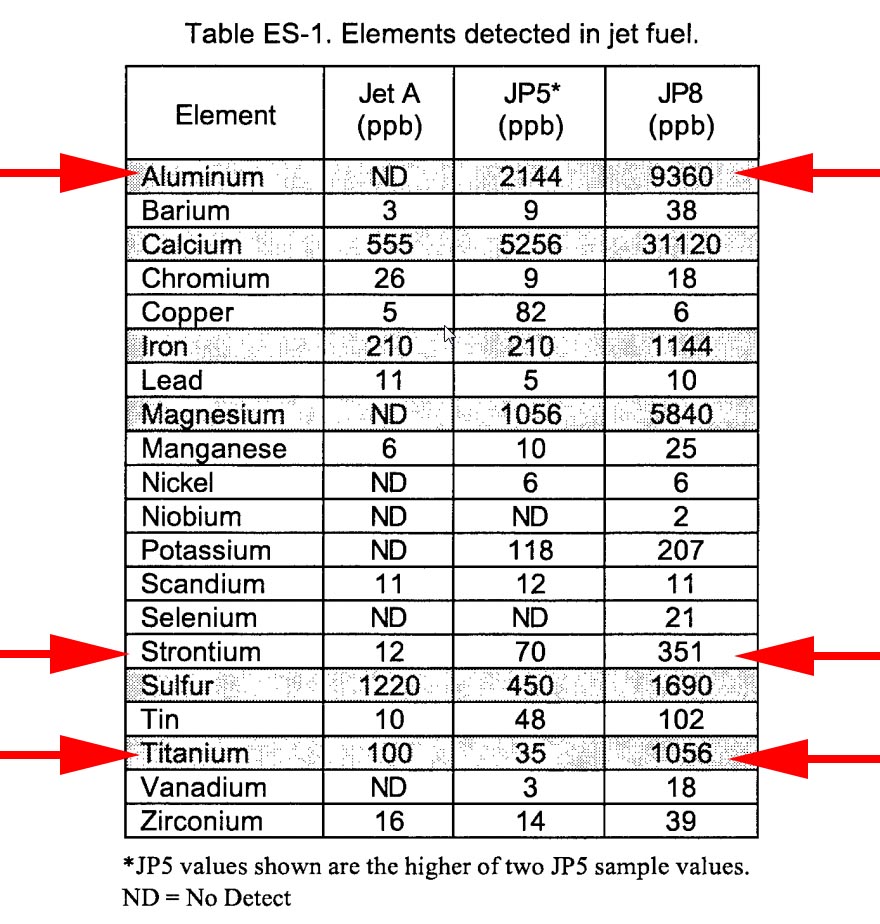 ...Papers on Aluminum in Jet Fuel:

Answer: TRUE. Cirrus clouds are filled with metals and most importantly sulfuric acid! The health effects of breathing aluminum and barium are well documented, but that most overlooked concern of chemtrails is this: ACID RAIN! 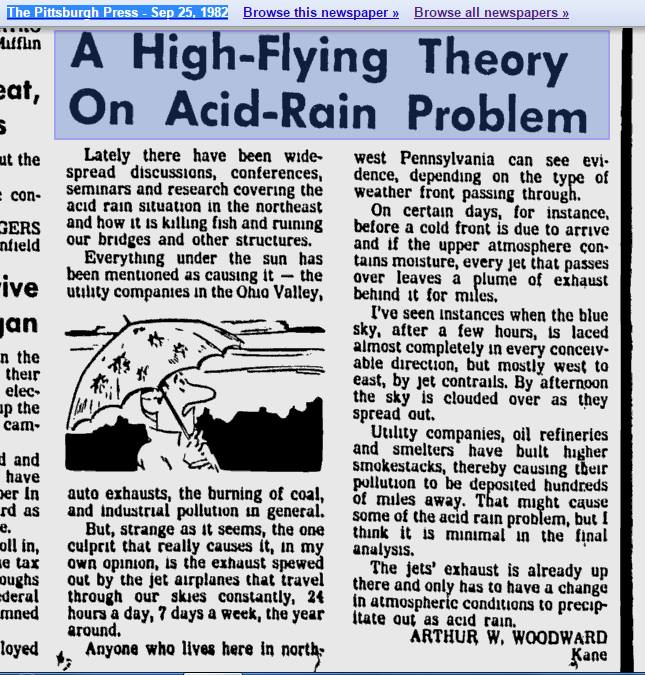 When I was in school (20 years ago) I heard about acid rain on a daily basis. Today, the term acid rain is rarely talked about. Geoegnineers prefer to talk about ocean acidification and blame that on carbon dioxide. Aside from acid rain and metals, aviation fuel and its additives are filled with cancer causing and trade secret ingredients. Here is a list of chemicals in jet fuel additives:

Here is a breakdown of required additives in different fuel types:

Biofuels, Carbon Black Dust, Sulfuric Acid, and Water Vapor Pollution are completely absent from the “chemtrail conspiracy” narrative and few activists have ever heard of these climate changing issues. This is a HUGE red flag. Please get educated if you intend to fix our skies and end chemtrails.
Based on what we know there should be no need for “smoking guns” or “whistle blowers.” Jet aircraft are geoengineering our skies, the military is involved, we are breathing metal particles, and these clouds are drenching us with ACID RAIN!