Context to current affairs in Venezuela

If you want context to what is happening in Venzuela then don’t go beyond these two documentaries.

I regret now, not having paid more attention to this earlier.

US intervention in Venezuela and Latin America

"The War on Democracy" is a documentary film directed by Australian reporter John Pilger.

CIA's participations in military coups against Hugo Chavez, Jacobo Arbenz in Guatemala and Salvador Allende in Chile, is demonstrated through the presentation of documents and interviews.

The Revolution Will Not Be Televised - Chavez: Inside the Coup

A country that is demonstrably post peak-production (as shown by the Peak Oil sites); low oil prices have affected Venezuela more than any other country; they have had an economic blockade and political interference (read - attempts at regime change) from America and its allies.

Look at Google and ALL you can find are articles from western publications putting all the blame on mismanagement, corruption and "socialism".


How oil-rich Venezuela ended up with a miserable economy

Venezuela: How the most oil rich nation on earth was brought to the brink of collapse
This is what happens when an economy and a society disintegrates due to economic mismanagement and populist folly

Scholarly articles that give context are nowhere to be seen. I had to look on DuckDuckGo to find the following articles (from Peak Oil sites)

We see the impact of the conventional oil peak in Venezuela. As an example let’s look at the El-Furrial field.
Venezuela peak 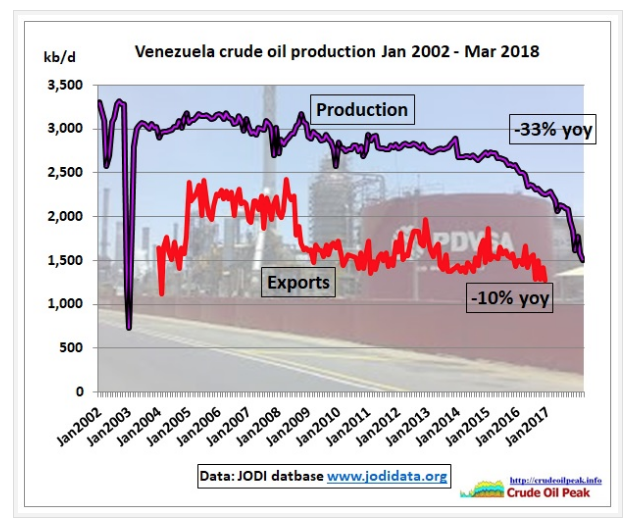 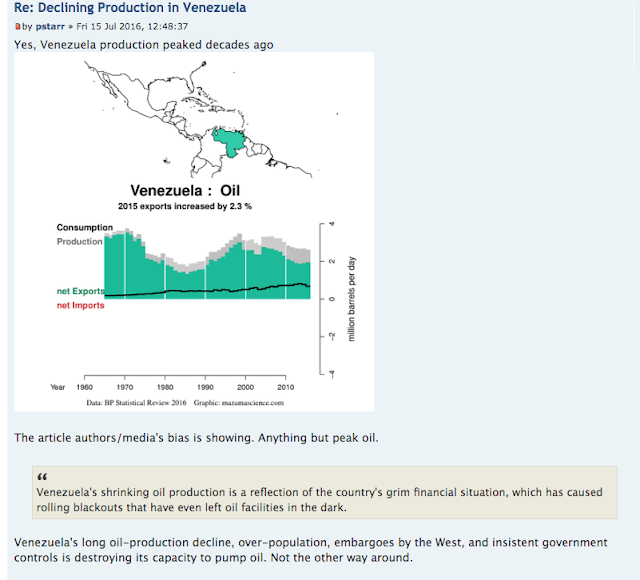 Here is the WSJ: 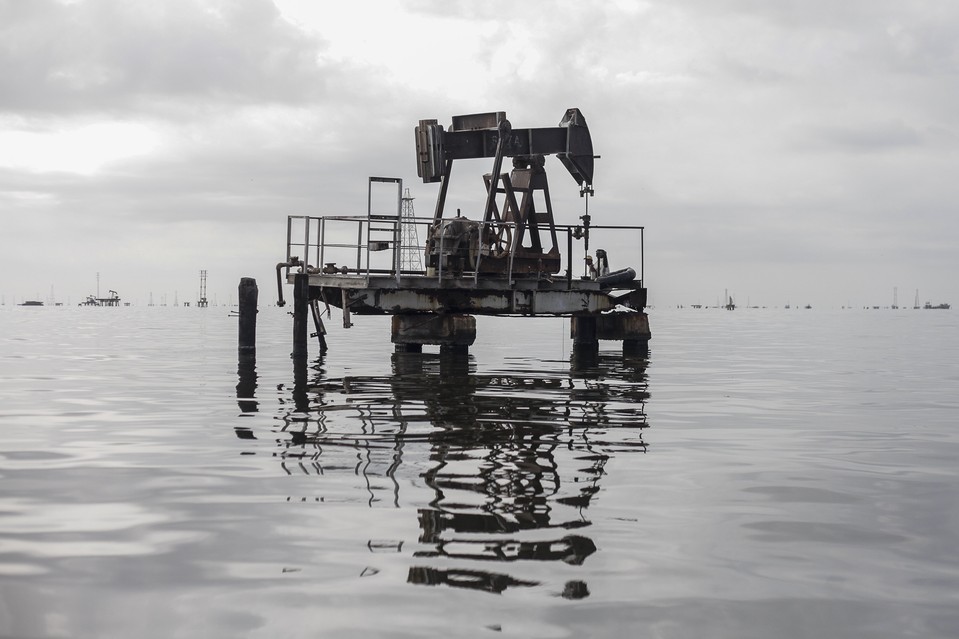 
CARACAS, Venezuela—Venezuela’s oil output is collapsing at an accelerating pace, deepening an economic and humanitarian crisis and increasing the chances the country will default on its debts.

Crude production fell 11% in December from the month before, according to government figures released Thursday. Over all of 2017, output was down 29%, among the steepest national declines in recent history, driven by mismanagement and under investment at the state oil company, say industry observers and oilmen.
The drop is deeper than that experienced by Iraq after the 2003 war there—when the amount of crude pumped fell 23%—or by Russia during the collapse of the Soviet Union, according to data from the Organization of the Petroleum Exporting Countries.
“In Venezuela, there is no war, nor strike,” said Evanán Romero, a former director of government-run Petróleos de Venezuela SA. “What’s left of the oil industry is crumbling on its own.”

Oil is critical to Venezuela’s state-led economy. Petroleum sales bring in 95% of the country’s foreign-currency earnings, so declining output will make it harder for the government to import everything from machinery to food and medicine.
Over the past four years, the country’s economy has shrunk by about 40% and inflation has surged—topping 2,600% last year, according to the National Assembly. Nearly one in four factories didn’t reopen after Christmas, according to a local industry association.
Malnutrition is spreading among the young and elderly, while health officials report a resurgence of illnesses ranging from malaria to diphtheria. Meanwhile social stability is fraying. At least four people have died during outbreaks of looting in recent weeks.
The government is already resorting to barter—seeking to trade diamonds and other valuables—in an effort to bring in sorely needed supplies as President Nicolás Maduro prepares for elections this year.
This week, the state oil company’s new chief, National Guard Gen. Manuel Quevedo, blamed the production downturn on sabotage and terrorist attacks by the opposition. He didn’t offer any evidence. He said output has stabilized and will grow to 2.5 million barrels a day this year.
Most analysts, however, expect Venezuela’s production to continue falling. By this year’s end, output could fall to 1.3 million barrels a day, according to Francisco Monaldi, a Venezuelan energy expert at Rice University.

“The only discussion right now is how much is it going to decline by. There is no talk of a turnaround,” said Luisa Palacios, analyst at consultancy Medley Global Advisors in New York.
In December, daily production fell by 216,000 barrels to 1.6 million—the 15th consecutive monthly decline. In the last 12 months, Venezuelan output fell by 649,000 barrels a day.
The decline has been exacerbated by a management purge at state-run PdVSA by Mr. Maduro that has paralyzed the oil giant. Seventy senior managers have been jailed on graft allegations in the past three months. Generals with no industry experience have been named to run the firm.
U.S. sanctions have also hurt, scaring off some of the last remaining investors. 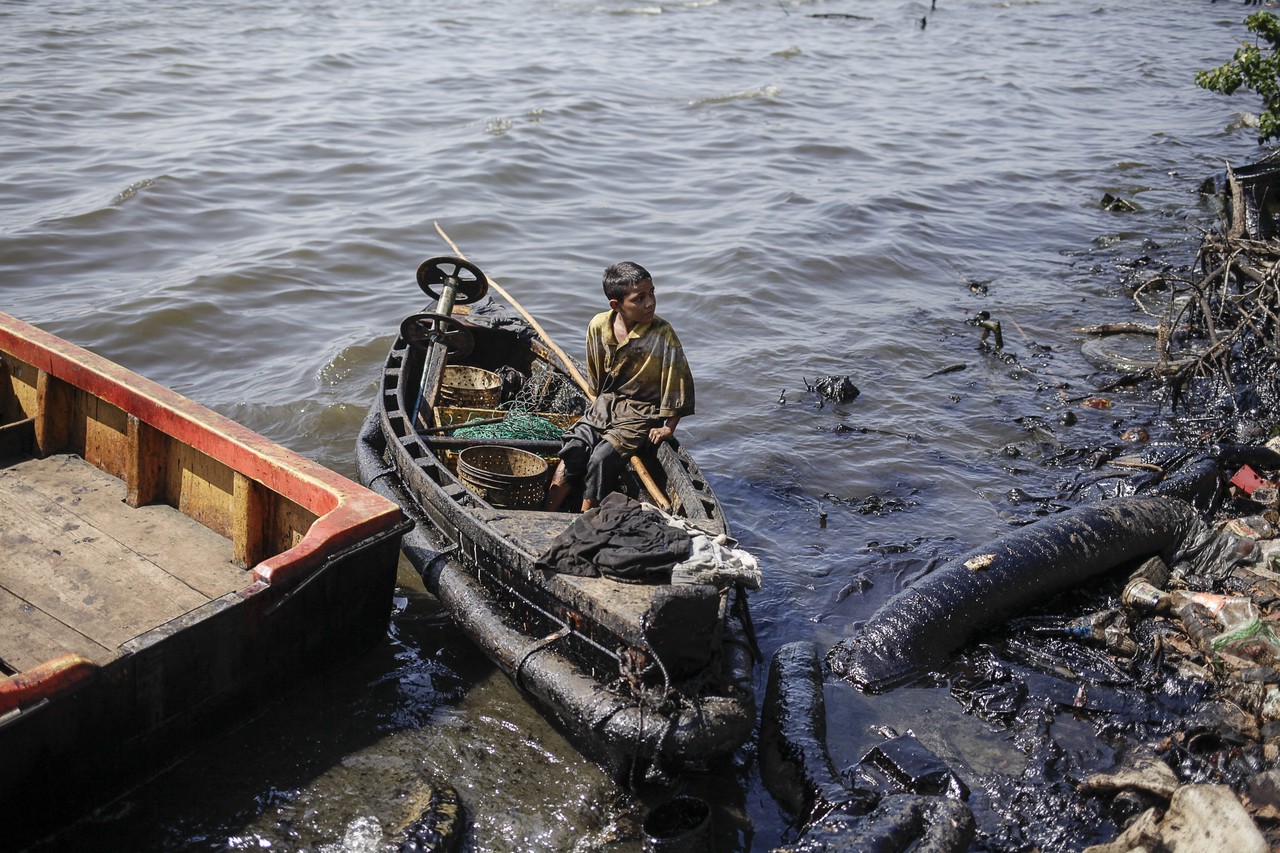 A boy, his clothes saturated with oil, sits in a boat at the fishing town of Cabimas. PHOTO: FABIOLA FERRERO FOR THE WALL STREET JOURNAL

Multinational firms partnered with PdVSA in southern Venezuela, home to the world’s biggest oil reserves in the Orinoco Oil Belt, have cut spending to a minimum because of overdue bills, red tape and high taxes, say oil industry executives.
“International operators have essentially zero appetite for putting any additional investment dollars into Venezuela under current conditions,” said Pavel Molchanov, oil analyst at brokerage Raymond James.
Venezuela’s large output drop means the country has been the only major oil producer to not benefit from rising crude prices. The value of the Venezuelan oil export basket rose 25% last year on the back of stronger global demand and shrinking inventories.
But this windfall was wiped out by lower output and the rising cost of oil products imported by PdVSA to aid its operations.
Brokerage Torino Capital forecasts that the value of Venezuelan oil exports will fall about three billion dollars this year to $26.5 billion. As recently as 2012 the country earned $93 billion from oil exports.
Roughly 1.3 million barrels a day of Venezuelan oil goes to the country’s domestic market or is pledged in prepaid supply and debt deals with allies Russia, China and Cuba, according to Rice University’s Mr. Monaldi.
That leaves precious little to sell in the open market. Exports to the U.S., Venezuela’s top cash-paying customer, fell 20% in 2017 to 593,000 barrels a day, according to BMI Research.
The larger void in global energy supplies resulting from Venezuela’s faltering production may push oil prices higher and allow other heavy-crude producers like Canada, Iraq and Mexico to seize market share, Medley’s Ms. Palacios said.
Venezuela’s decline is already benefiting its OPEC peers who have been able to raise their own output without breaking the cartel’s production cut agreement. OPEC’s overall production edged higher by 42,000 barrels a day in December from the previous month.
A full-blown default on Venezuelan debts—the country has already been struggling to pay interest and principal on its $60-billion foreign debt—could put more oil sales at risk.
PdVSA and the central government are in default on more than $700 million of bond payments. The state oil company hasn’t made any interest payments for a month, raising fears that creditors could start seizing oil shipments as compensation.
Last week, a tanker carrying Venezuelan crude was detained in the Caribbean island of Curaçao at the request of an unidentified group of investors seeking $30 million in back payments from Venezuela, according to diplomats familiar with the matter.
“If Venezuela’s oil shipments become a target, that would be the worst possible scenario for the country’s oil industry,” said Artyom Tchen, an Oslo-based oil analyst at consultancy Rystad Energy.
Write to Anatoly Kurmanaev at Anatoly.kurmanaev@wsj.com and Kejal Vyas at kejal.vyas@wsj.com