BREXIT BOOST FOR THERESA MAY! HERE IS THE RESULTS OF THE 7 AMENDMENTS VOTED ON TODAY!! 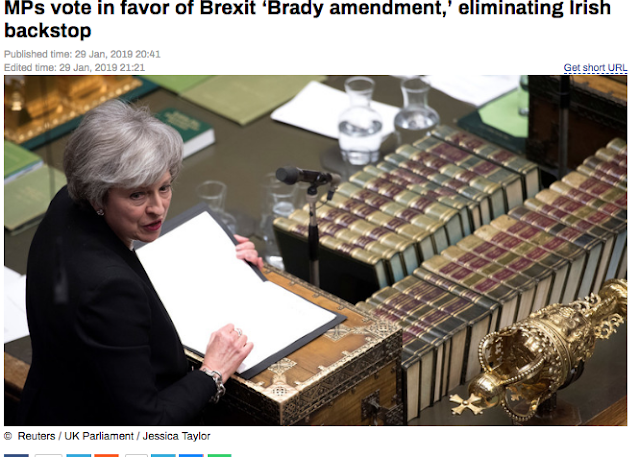 The British Parliament has voted in favor of the ‘Brady amendment’ to Prime Minister Theresa May’s Brexit deal. The amendment removes the contentious Irish backstop from the deal, setting May up for a clash with the EU.

The amendment passed by 317 votes to 301. MPs also voted 318 to 301 in favor of a symbolic amendment rejecting a no deal Brexit.

“There is a limited appetite for change in the EU, and negotiating it won’t be easy,” May said after the vote.

MPs earlier voted no to an amendment by Labour leader Jeremy Corbyn to avoid a no deal Brexit and seek a permanent customs union with the EU. An amendment by former Attorney General Dominic Grieve to restart debate was also defeated, as were two seeing to extend article 50.

Labour MP Yvette Cooper’s amendment – backed by Labour and a handful of Tories was also defeated. The amendment would have set aside a day next week to debate a bill seeking to delay article 50, which in turn would give MPs a new deadline of February 26 to get a Brexit deal through Parliament. If that bill failed, MPs could then vote again on delaying article 50.