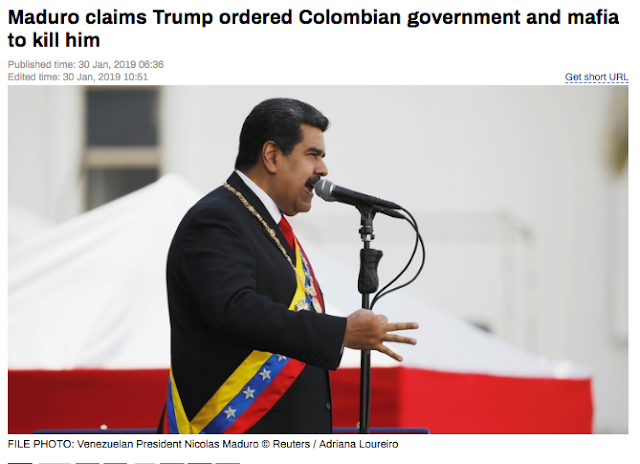 Venezuelan President Nicolas Maduro has claimed that Donald Trump ordered the Colombian government and mafia to assassinate him, but insisted that he’s well protected from the threat of assassination.

Maduro, however, expressed confidence in his country’s security services.

“I am always protected by the Venezuelan people, we have a good intelligence service,” he said.

Maduro also claimed that White House National Security Adviser John Bolton has prevented Trump from communicating with the Venezuelan government. The Venezuelan president told RIA Novosti that he has repeatedly tried – but failed – to reach out to the US leader.

"For all these years, I have been trying on a personal level [to establish dialogue] … But Bolton prevented Donald Trump from initiating a dialogue with Nicolas Maduro. I have the information that he has prohibited this," Maduro said.

Venezuela Begins Deployment of 500,000 Troops; Colombia Sending Troops to its Border too 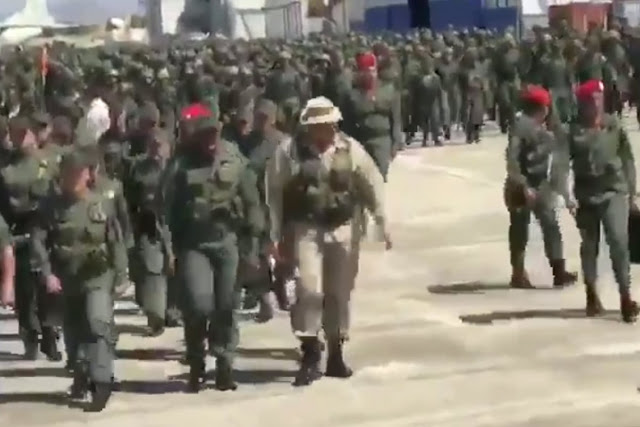 Venezuela has begun the deployment of its 500,000 man army throughout the country, with emphasis on its border with Colombia.

In response, Colombia is now deploying troops to its border with Venezuela . . .

Defense Minister Vladimir Padrino declares his forces are prepared for an invasion: “We are seeing the same formula they applied to Libya... They will try to penetrate across the border... So we are waiting for them here.”

Venezuelan soldiers on TV are telling the United States "You want war, we will give you war."

In an interview with Russian Television station Ria Novasti, Venezuela President Nicolas Maduro claims President Donald Trump has given an order to kill him.

- First, my destiny is in the hands of the Lord, I am a Christian, I believe in the defense of the Lord ... The people of Venezuela protect me all the time, we have a good intelligence service. But without a doubt, Donald Trump gave the order to kill me, told the Colombian government, the Colombian mafia, to kill me. If something happens to me once, Donald Trump and Colombian President Ivan Duque will be responsible. Meanwhile, they protect me, we have a good system of protection, and, moreover, we have more substantial protection - this is protection from God, who will give me a long life.

In the meantime, Video from Colombia shows that country is now deploying its army to the border with Venezuela: 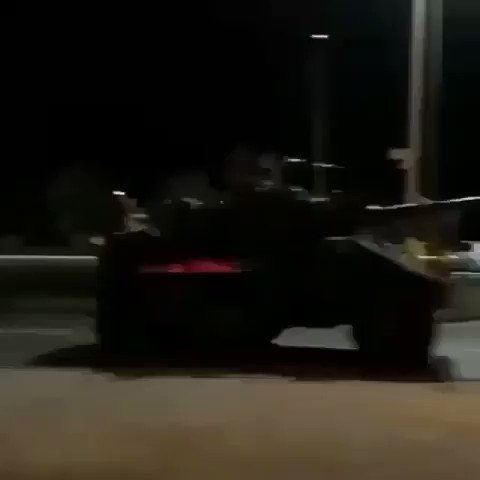 When countries start deploying troops on this scale, the outlook for future conflict is severe.

Defectors from Venezuela's army who are now loyal to self-declared president Juan Guaidó have called on the Trump administration to arm them in what they refer to as their quest for "freedom," and are strongly opposed to the United States conducting a broad military intervention.

Two former soldiers, Carlos Guillen Martinez and Josue Hidalgo Azuaje, who live outside the country, say they are in contact with hundreds of willing defectors who want US military assistance in their revolt against the Maduro regime.

"As Venezuelan soldiers, we are making a request to the US to support us, in logistical terms, with communication, with weapons, so we can realize Venezuelan freedom," Guillen Martinez told CNN.

Hidalgo Azuaje said: "We're not saying that we need only US support, but also Brazil, Colombia, Peru, all brother countries, that are against this dictatorship."

The appeal came as US national security advisor John Bolton on Sunday warned the Maduro government that violence against Venezuela's political opposition—or against its leader and self-declared president Juan Guaidó—would be met with stern reprisals.

Bolton also appealed to the Venezuelan military to assist in the smooth transition of power from Maduro to Guaidó, whom the US has recognized as the legitimate head of state.

American officials have repeatedly warned that no options are off the table, in terms of US intervention. -CNN

The most loyal supporter of the British Deep State and the Empire, the Guardian, words things as if there was not a more ridiculous "claim"

Venezuela: Maduro accuses US of trying to 'get hands on our oil' 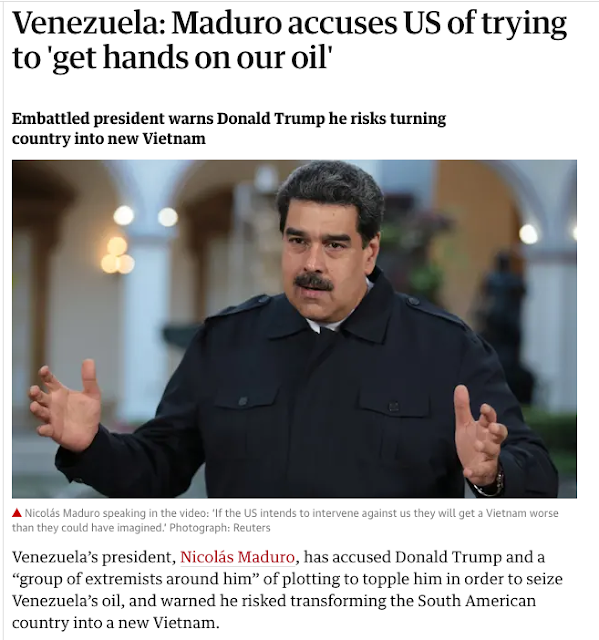