SOMETIMES A THOUSAND WORDS IS WORTH A PICTURE! 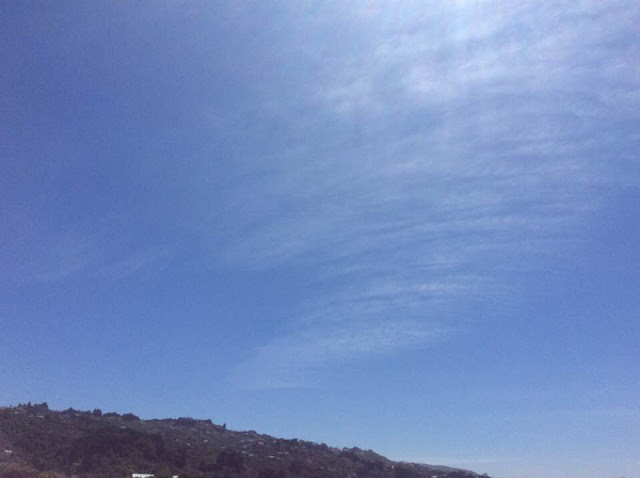 We left the murk of the valley to travel north to the next suburb where the sky was blue. Apart from one contrail that was starting to dissipate we were met by the spectacle of clouds a bit like these but it was vivid - there was a vivid, regular undulation of clouds that looked as if someone had come along with a rake.

By the time (as you can see) it was starting to dissipate so that it is possible to descibe them as "lazy clouds".

Pam and I have been shocked on a regular basis because that is what we see (almost) every time the sky is clear (every 2-3 days). The "clear" bit is in itself a bit of a joke because often this shit covers much of the sky.

I am not in a hurry to give an instant explanation or theory (unlike the detractors who see who are either wedded to their computer screen or staring into their coffee cup).

Instead I like to simply observe and stick with this while playing around with some ideas.

I have become used to people (including the chemtrail theory proponents) saying "don't look there; look here instead!". Now, it seems to be a whole new group of people saying the same thing.

I hate people who push their instant opinions (totallly devoid of any evidence) on others, sometimes quite aggressively). I dislike in equal measure, people who refuse to even look or ask open-ended questions.

In fact, the commentariat taken as a whole.

The ability to look carefully and observe anomolies and to remain with the question is incredibly rare.

I do not KNOW what is happening but I have some strong suspicions which it has been hard to admit in the midst of what can be described by people with eyes to see, as terrifying times.
Posted by seemorerocks at 13:13