HERE`S WHY THE YELLOW
VEST PROTESTS HAVE
SCARED THE ELITES TO
DEATH!!!! A BRILLIANT
ANALYSIS!!!

The Elites have been rattled to the bone!! Here is a brilliant analysis of the Yellow Vest movement, what`s behind it, what`s underneath it and where it`s going next. Plus the effect of World Debt in this perspective.


The 'Gilets Jaunes' Are Unstoppable: "Now, The Elites Are Afraid"

Authored by Christophe Guilluy via Spiked-Online.com,

The gilets jaunes (yellow vest) movement has rattled the French establishment. For several months, crowds ranging from tens of thousands to hundreds of thousands have been taking to the streets every weekend across the whole of France. They have had enormous success, extracting major concessions from the government. They continue to march. 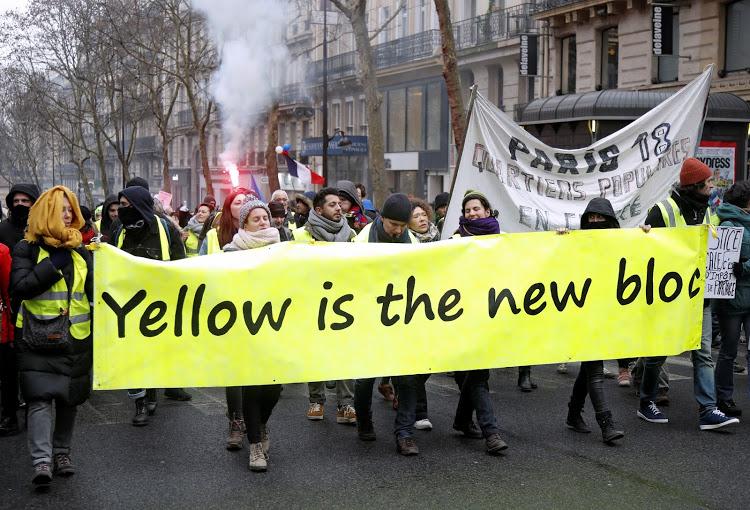 Back in 2014, geographer Christopher Guilluy’s study of la France périphérique (peripheral France) caused a media sensation. It drew attention to the economic, cultural and political exclusion of the working classes, most of whom now live outside the major cities. It highlighted the conditions that would later give rise to the yellow-vest phenomenon. Guilluy has developed on these themes in his recent books, No Society and The Twilight of the Elite: Prosperity, the Periphery and the Future of France. spiked caught up with Guilluy to get his view on the causes and consequences of the yellow-vest movement.

spiked: What exactly do you mean by ‘peripheral France’?

Christophe Guilluy: ‘Peripheral France’ is about the geographic distribution of the working classes across France. Fifteen years ago, I noticed that the majority of working-class people actually live very far away from the major globalised cities – far from Paris, Lyon and Toulouse, and also very far from London and New York.

Technically, our globalised economic model performs well. It produces a lot of wealth. But it doesn’t need the majority of the population to function. It has no real need for the manual workers, labourers and even small-business owners outside of the big cities. Paris creates enough wealth for the whole of France, and London does the same in Britain. But you cannot build a society around this.

The gilets jaunes is a revolt of the working classes who live in these places.
They tend to be people in work, but who don’t earn very much, between 1000€ and 2000€ per month. Some of them are very poor if they are unemployed. Others were once middle-class. What they all have in common is that they live in areas where there is hardly any work left. They know that even if they have a job today, they could lose it tomorrow and they won’t find anything else.
spiked: What is the role of culture in the yellow-vest movement?

Guilluy: Not only does peripheral France fare badly in the modern economy, it is also culturally misunderstood by the elite. The yellow-vest movement is a truly 21st-century movement in that it is cultural as well as political. Cultural validation is extremely important in our era.

One illustration of this cultural divide is that most modern, progressive social movements and protests are quickly endorsed by celebrities, actors, the media and the intellectuals. But none of them approve of the gilets jaunes. Their emergence has caused a kind of psychological shock to the cultural establishment. It is exactly the same shock that the British elites experienced with the Brexit vote and that they are still experiencing now, three years later.

The Brexit vote had a lot to do with culture, too, I think. It was more than just the question of leaving the EU. Many voters wanted to remind the political class that they exist. That’s what French people are using the gilets jaunes for – to say we exist. We are seeing the same phenomenon in populist revolts across the world.
spiked: How have the working-classes come to be excluded?

Guilluy: All the growth and dynamism is in the major cities, but people cannot just move there. The cities are inaccessible, particularly thanks to mounting housing costs. The big cities today are like medieval citadels. It is like we are going back to the city-states of the Middle Ages. Funnily enough, Paris is going to start charging people for entry, just like the excise duties you used to have to pay to enter a town in the Middle Ages.

The cities themselves have become very unequal, too. The Parisian economy needs executives and qualified professionals. It also needs workers, predominantly immigrants, for the construction industry and catering et cetera. Business relies on this very specific demographic mix. The problem is that ‘the people’ outside of this still exist. In fact, ‘Peripheral France’ actually encompasses the majority of French people.
spiked: What role has the liberal metropolitan elite played in this?
Guilluy: We have a new bourgeoisie, but because they are very cool and progressive, it creates the impression that there is no class conflict anymore. It is really difficult to oppose the hipsters when they say they care about the poor and about minorities.

But actually, they are very much complicit in relegating the working classes to the sidelines. Not only do they benefit enormously from the globalised economy, but they have also produced a dominant cultural discourse which ostracises working-class people. Think of the ‘deplorables’ evoked by Hillary Clinton. There is a similar view of the working class in France and Britain. They are looked upon as if they are some kind of Amazonian tribe. The problem for the elites is that it is a very big tribe.
The middle-class reaction to the yellow vests has been telling. Immediately, the protesters were denounced as xenophobes, anti-Semites and homophobes. The elites present themselves as anti-fascist and anti-racist but this is merely a way of defending their class interests. It is the only argument they can muster to defend their status, but it is not working anymore.
Now the elites are afraid. For the first time, there is a movement which cannot be controlled through the normal political mechanisms. The gilets jaunes didn’t emerge from the trade unions or the political parties. It cannot be stopped. There is no ‘off’ button. Either the intelligentsia will be forced to properly acknowledge the existence of these people, or they will have to opt for a kind of soft totalitarianism.

A lot has been made of the fact that the yellow vests’ demands vary a great deal.
But above all, it’s a demand for democracy. Fundamentally, they are democrats – they want to be taken seriously and they want to be integrated into the economic order.
spiked: How can we begin to address these demands?

Guilluy: First of all, the bourgeoisie needs a cultural revolution, particularly in universities and in the media. They need to stop insulting the working class, to stop thinking of all the gilets jaunes as imbeciles.

Cultural respect is fundamental: there will be no economic or political integration until there is cultural integration. Then, of course, we need to think differently about the economy. That means dispensing with neoliberal dogma. We need to think beyond Paris, London and New York.
Kunstler: America's "All Is Lost" Moment Looms
Zero Hedge,
21 January, 2019

“Last night I had a dream. You were in it and I was in it with you….”
— Randy Newman


As in this age of Hollywood sequels and prequels, America prefers to recycle old ideas rather than entertain new ones, so you can see exactly how the 2020 presidential election is shaping up to be a replay of the Great Depression, with Roosevelt-to-rescue! — only this time it’ll be with somebody in the role of Eleanor Roosevelt as chief executive. Donald Trump, of course, being the designated bag-holder for all the financial blunders of the past decade, gets to be Herbert Hoover. As was the case in the original, economic depression will segue into war, with maybe not such a happy ending for us as World War Two was. 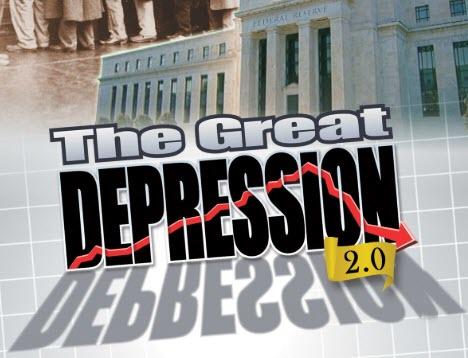 As in the standard Hollywood screenplay format, expect an “all is lost” moment when the “hero” (the USA) faces the existential dread of realizing that there is no more borrowing with the collateral gone. Translation: when the Federal Reserve discovers it can’t cue up yet another round of “Quantitative Easing” (QE) and ZIRP without destroying the value of the dollar — which it might do anyway, since monetary inflation is a great benefit to those who can’t pay back their debts, and the USA is the biggest deadbeat of all. An inflationary depression won’t be the same as the deflationary depression of the 1930s, but remember (cliché alert): history doesn’t exactly repeat, it rhymes.

Financialization, it’ll turn out, was just money with its value removed. Imagine how pissed off the voters will be.

Note: the growth predicament is hugely misunderstood in this land, because the shale oil “miracle” was such a dazzling stunt. America is now producing above 12 million barrels of oil a day, two million higher than what was thought to be the all-time peak of 10 million a day in 1970. That is extraordinary indeed. We are the world’s leader in oil production now, ahead of Saudi Arabia and the wicked Russian bear. What most Americans don’t know is that this stunning feat was accomplished with hundreds of billions of dollars in borrowed money (debt) that will never be paid back.

The collateral for all that money was the conviction that there was a lot of money to be made in shale oil. But the shale oil industry has had a negative cash flow since it started around 2005. So, we’ve demonstrated that you can produce a lot of something at a big loss for a while, until you can’t. And the moment is approaching when there will be no more loans for the shale oil industry and then, voila, no more shale oil. And the USA will have a whole lot less of its primary energy “input” to the economy. We’ll be back to 2008. The turnaround will be fast and shocking and the American public will feel swindled. And having been already swindled out of all the other comforts and conveniences of what used to be modern life — a job, a home, a car — they will be even more supremely pissed off.

Enter stage left, the first woman president. Take your pick: Kamala Harris, Elizabeth Warren, Kirsten Gillibrand — with AOC as Speaker of the House! The new “Eleanor” will out-do Franklin Roosevelt in “innovative” economic policy. Only this time it won’t be jolly corps of brawny men marching off with pick-axes and shovels to carve trails through the national parks. It will be an orgy of collectivization, led by a gender-fluid army of commissars in an American sequel to the classic film Battleship Potemkin. Madam President will nationalize everything that’s not fastened down with square-head decking screws. Then the show trials will commence, first with the hated One Percenters going to the firing squads and then briskly moving to all the enemies of “intersectional justice.”

None of that will make the USA a better country. And then imagine how pissed off Russia and China will be when Madam President takes up her policy of exporting the New Bolshevism to other lands (because it works so well). Been there, done that, they’ll say. And maybe they’ll have to smack us down to get the point across.