The Guardian on Australia's heatwave

This is from YESTERDAY

This live blog has closed. Find links to Friday’s live blog below, and Thursday’s news story on the Adelaide heatwave 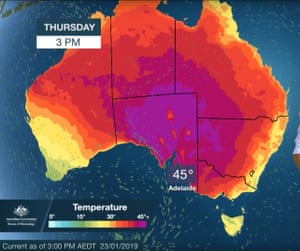 24 January, 2019
20h ago08:49
This blog is wrapping up for the evening, thanks for reading.
While some parts of the country that have sweltered today will get some relief tomorrow, others will heat up. The latest forecast is for a high of 44C in Melbourne, 39C in Canberra and 38C in Penrith in western Sydney (the forecast for Sydney is for a high of 29C). Hobart is expected to reach a high of 37C, Brisbane 32C and Darwin 32C.
SA’s Port Augusta, where it hit a maximum of 49.5C earlier today, will still be very hot – 37C.
Menindee, the site of recent fish kills in western New South Wales, is predicted to reach 48C on Friday.
We will bring you the latest on the Tasmanian bushfires and the ongoing heatwave tomorrow.
FacebookTwitter


20h ago08:24
The heatwave has been hard on animals and humans alike. This image was sent to us by reader Andrew Correll.


21h ago07:47
The ABC is reporting South Australia’s emergency power generators have been switched on for the first time amid the ongoing heatwave.
It reports: “Temporary diesel power generators owned by the South Australian government have been switched on for the first time, as the Australian Energy Market Operator (AEMO) deals with record-breaking heat conditions across SA and Victoria.
“The state government said AEMO ordered the generators to deal with a supply shortfall in Victoria.”
FacebookTwitter
21h ago07:47
Since you’re here … we have a small favour to ask. Three years ago we set out to make The Guardian sustainable by deepening our relationship with our readers. We decided to seek an approach that would allow us to keep our journalism open and accessible to everyone, regardless of where they live or what they can afford.
More than one million readers have now supported our independent, investigative journalism through contributions, membership or subscriptions. We want to thank you for all of your support. But we have to maintain and build on that support for every year to come.
The Guardian is editorially independent – our journalism is free from commercial bias and not influenced by billionaire owners, politicians or shareholders. No one edits our editor. No one steers our opinion.
If everyone who reads our reporting, who likes it, helps to support it, our future would be much more secure.
For as little as $1, you can support the Guardian – and it only takes a minute. Thank you. Make a contribution - The Guardian


22h ago06:52
And here’s how far the heat will stretch tonight. There’s still a lot of 40C spots, as of right now, all across the country.


22h ago06:46
I’m now remembering some ominous words from the mayor of Port Augusta, Brett Benbow, who we spoke to earlier. “[The heat] won’t peak until about 7.30 tonight,” he said. “That heat won’t just disappear, it takes hours.”
FacebookTwitter


22h ago06:25
Hello everyone, Naaman Zhou here, taking over from my colleague Luke.
Some further clarification has come in on Adelaide’s record-breaking heat. It’s even hotter than you thought.
That 46.6C figure comes from the bureau’s official temperature gauge for the city, which is at West Terrace. Other parts of Adelaide, by the bureau’s own calculations, are in fact soaring up past that – but can’t be included as the maximum for Adelaide.
Kent Town, for example, has officially hit 47.4C today.

The mercury has continued to rise in Adelaide, which can now lay claim to being the hottest capital in Australia – at least for today.
Its peak temperature on Thursday of 46.6 has eclipsed the record held by Melbourne, which reached 46.4C.


23h ago05:40
A reminder that Melbourne is expected to drop to an “oppressive” 29C tonight. The overnight record is 30.6C.
The bureau has also revised its forecast up to 44C for tomorrow. As it stands, today’s forecast has also been blown out of the water. The top temperature in central Melbourne was 40.4C at 4pm, according to the bureau. It was only expected to reach 36C.

All eyes have been on whether Port Augusta, the hottest place in Australia, can break its own record of 48.9C that was set on 15 January.
It appears to have done so. The Bureau of Meteorology’s observations data says the town hit a peak temperature of 49.1C at 3.15pm.
FacebookTwitter

'I haven't seen conditions at this level': Tassie fireys warn of unprecedented conditions

Crews battling scores of fires across Tasmania will be without water-bombing aircraft on one of the highest-risk days on record and major national parks will be closed as a precaution.
Fifty fires are burning across the state on Thursday. Two-thirds of them are considered uncontained, and authorities are bracing for worsening conditions.
“On a whole, across the whole part of the state, I haven’t seen conditions at this level,” the Tasmania Fire Service’s regional chief, Jeff Harper, said.
The conditions are set to peak from 5am on Friday, with hours of dry air, temperatures reaching into the high 30s, and 40km/h winds gusting up to 90km/h.
“The weather tomorrow may see that our aerial assets that have been so vital to us over the past week or so not able to fly,” Harper said. “The wind conditions are so turbulent that rotary-wing and fixed-wing aircraft, it’s not safe for them to fly under those conditions.”
Ground crews will be stepped up to try to cover the loss of aircraft, but Harper said human safety and property defence efforts would be prioritised.
Two fires have could threaten communities. One at central Great Pine Tier could bear down on the township of Shannon, and the other the Gell river fire southwest of Hobart which has been burning since December 28.
Residents are being told of the threat and efforts are being made to clear fuel from around the communities. In some cases there is 40 tonnes of fuel each hectare.
One house has been lost near central Miena, and residents remain on alert at Barren Tier, Tods Corner, Penstock Lagoon, Liawenee and Shannon.
A statewide fire ban is in place until Monday.
The government will close some of the state’s major national parks. The road to the pinnacle of Mount Wellington, overlooking Hobart, will be closed from Thursday night.
Other popular sites including Mount Field national park near Hobart, and Hastings Caves, south of the capital, will be closed.
“The government’s priority is community and visitor safety,” the premier, Will Hodgman, said.
FacebookTwitter


23h ago05:03
They have closed the roof at the tennis. And for good reason. At Rod Laver arena, the on-court temperature is 39C.
After winning through to the Australian Open final, Petra Kvitovasaid: “I was happier than the fans that the roof closed.” Understandable.
FacebookTwitter

Marko Jovanovic-Jozic, 18, brought his cousin Mary to beat the heat.
“My cousin came from Germany for the warm weather,” Marko said. “She came from -38 degree weather and the experience here has gotten a bit much. I told her if you want to cool off, the best place is the ice arena.”
That may be true, but even the chillers at the Thebarton Ice Arenain Adelaide’s west have been struggling in the heat, and the industrial ice is wet. Still, more than 350 people have come through its doors.


24h ago04:51
I don’t believe these temperatures have been confirmed by the Bureau of Meteorology but this gives you a sense of how it is in Australia right now.


24h ago04:42
As South Australia continues to swelter, let’s look ahead briefly to tomorrow when the heat is expected to sweep through to Victoria.
On Thursday Melbourne eclipsed its forecast top by two degrees, reaching 38C. Earlier I spoke to Jonathan How, a forecaster at the Bureau of Meteorology, who set the scene:
“Victoria will be the hottest place in Australia tomorrow. Places like the Murray will be getting into 45-46C territory; places like Mildura, Swan Hill, Echuca are all going to be 46C. Some of those places will break January records.
“Melbourne is going for a top of 43C but it could get as hot as 44C in some of the suburbs.
“It all depends on the timing of the change coming through. If the change comes through a little bit later it might be higher than 43C. If it comes through earlier it might not get as hot.”
How also noted that Melbourne would drop only to a “humid” 29C overnight.
FacebookTwitter


24h ago04:27
Here our full report on the likely culling of dozens of animals in central Australia.