Heatwave on its way to New Zealand 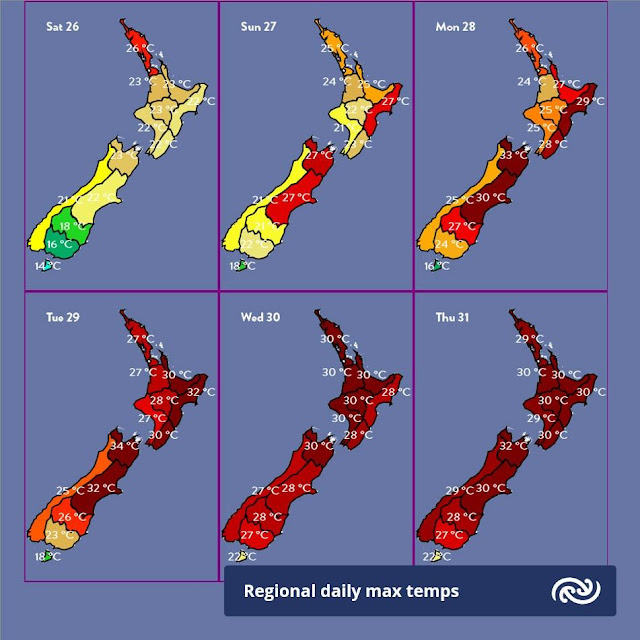 A map from MetService has shown the terrifying heat on its way to New Zealand, with most of the country sweltering under 30degC temperatures by Thursday.

Hot weather is making its way across the Tasman after Australia suffered a record-breaking heatwave. Some temperatures across the ditch reached the mid-40s.

Weather: Blistering heat to scorch New Zealand this weekend
Summer 2019 forecast: What can we expect?
How to get to sleep during sweltering summer temperatures

The map (above)  shows the country in shades of yellow and green for normal temperatures on Saturday, but dark red hues take over as the forecast temperature rises through the week.

Thursday will be the worst, with most of the country forecast for 30degC. The lowest temperature will be on Stewart Island, at 22degC. Southland is the next closest on 27degC.

MetService warned people should be prepared for some difficulty sleeping as the temperatures won't change much overnight.

"Many towns, especially in the east, will see consecutive 30degC days from Sunday through to the end of the working week, while others will have temperatures in the mid to high twenties.

"The warm, humid air is also going to make for some sultry nights, with overnight minimum temperatures in the high teens, and Nelson, Tauranga and Auckland not even cooling below 20degC for a few nights. Break out the fans!"

NIWA forecaster Chris Brandolino told The AM Show on Friday the weather will raise the chance of fire.

"The fire danger is going to go up. It's going to be difficult sleeping if you don't have the fan or AC," he said.

"This is going to be a prolonged, kind of accumulative event where maximum temperatures in the warmest locations either approach or exceed 35degC."