The mystery of Venezuela's gold

On Monday, a Russian newspaper reported that the empty plane had departed from Moscow to Caracas with enough space for some 400 passengers. According to photos taken by Reuters, it was parked by a private corner of the Caracas airport. It marked the first time the plane had flown on that route. Reports said the plane carried two crew teams and that there was "no obvious reason for it to fly there."

Update: A spokesman for the Kremlin has denied rumors that the private Boeing 777 registered to Russia's Nordwind airline which landed in Caracas this week was there to spirit away a chunk of the country's gold reserves - or escort the country's embattled leader, Nicolas Maduro, into exile, according to the Telegraph.


Refusal to hand over Venezuelan gold means end of Britain as a financial center – Prof. Wolff

The freezing of Venezuelan gold by the Bank of England is a signal to all countries out of step with US interests to withdraw their money, according to economist and co-founder of Democracy at Work, Professor Richard Wolff.

He told RT America that Britain and its central bank have shown themselves to be “under the thumb of the United States.”

“That is a signal to every country that has or may have difficulties with the US, [that they had] better get their money out of England and out of London because it’s not the safe place as it once was,” he said.

The economist added that it is for the Venezuelans who put the money into the care of the British bank to determine what is done with it, and not for the Bank of England.

“You can be sure that every government in the world is going to rethink putting any money in London, as they used to do, when they are watching this political manipulation with the money that they entrusted to the British. It is very dangerous for the world but for Britain particularly,” said Wolff.

He explained: “What the British are showing is that they can’t continue apparently to be the neutral place where you can safely put your money.”


Venezuela Has 20 Tons of Gold Ready to Ship. Address Unknown

Bank of England pleaded with not to give Nicolas Maduro $1.3 billion in gold 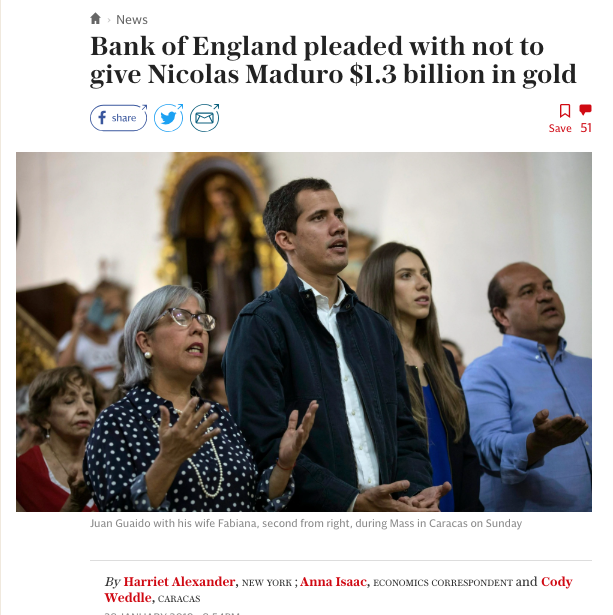 A British minister on Monday suggested that the Bank of England should decline to release £1 billion of gold to Venezuela's dictator after the opposition leader wrote to Theresa May.

Juan Guaido, who last week declared himself the country’s legitimate ruler and was recognised as such by the US, has written to Mark Carney, the Bank’s governor, to ask him not to hand over the gold to Nicolas Maduro. He also sent the letter to Theresa May, the Prime Minister.

"I am writing to ask you to stop this illegitimate transaction," the 35-year-old opposition leader wrote.

"If the money is transferred it will be used by the illegitimate and kleptocratic regime of Nicolas Maduro to repress and brutalise the Venezuelan people."

Sir Alan Duncan, minister of the Americas, on Monday said it was a decision for the Bank to make, and suggested they should decline to release the gold. 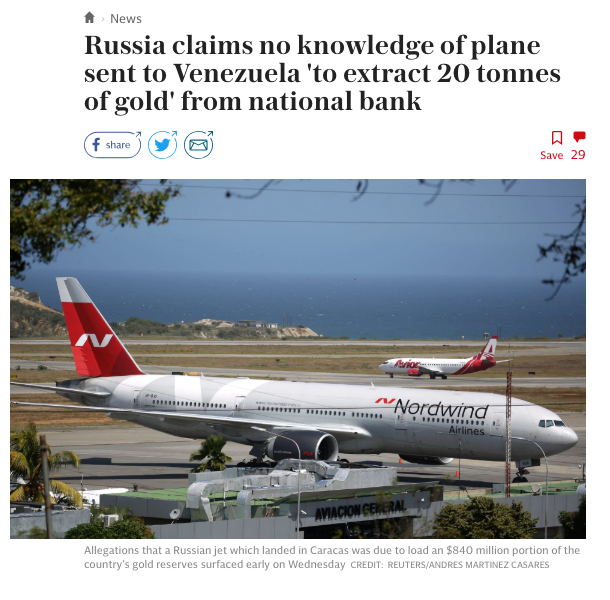 Russian authorities have moved to quash suspicions that 20 tonnes of gold are about to be moved from the Venezuela’s national bank to Moscow.

Is a mystery plane heading to Russia loaded with Venezuelan gold? 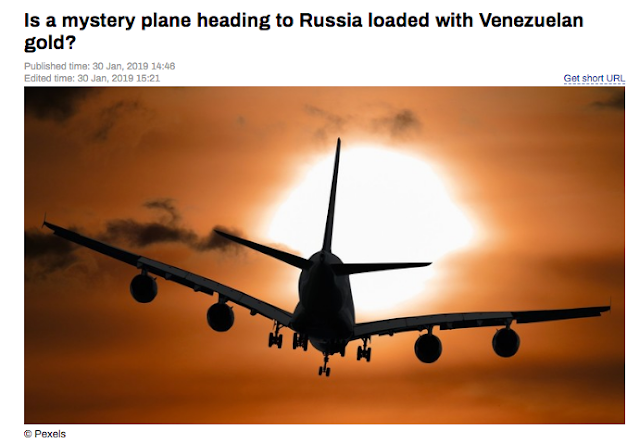 The Kremlin has called reports of 20 tons of Venezuelan gold heading to Russia fake news. Presidential spokesman Dmitry Peskov advised the public against listening to rumors.

On Wednesday, a member of the Venezuelan opposition and former banker at the country’s central bank, Jose Guerra, claimed he has information of the planned shipment of tons of gold bars, amounting to 20 percent of the bank’s holdings. The lawmaker said that a Russian jet, which arrived from Moscow, was ready to transport the cargo

Replying to @lumworld
MP @JoseAGuerra "We get information from officials of the Central Bank of Venezuela (BCV): a plane arrived from Moscow, in which they intend to extract at least 20 tons of gold, and we demand from the BCV details of what is happening" https://venezuela.liveuamap.com/en/2019/29-january-mp-joseaguerra-we-get-information-from-officials … via @AsambleaVE pic.twitter.com/TRr7VM6cLK

The statement was then reported by Bloomberg, and then by other Western media. The rumors were fueled by other reports, claiming that a mystery Boeing 777, which can carry some 400 passengers and belonging to Russia's Nordwind Airlines, was spotted at the local airport after flying direct from Moscow.

The Kremlin rejected the reports, calling them fake news.

“There is no such information,” said Peskov. “It is necessary to be very cautious about different hoaxes,” he added.

Replying to @rprose
Finance Minister Simon Zerpa declined to comment on the nation’s gold and also said there was no Russian plane at Simon Bolivar International Airport.

“I’m going to start bringing Russian and Turkish airplanes every week so everybody gets scared.” https://www.bloomberg.com/news/articles/2019-01-30/venezuela-has-20-tons-of-gold-ready-to-ship-destination-unknown …

Vladimir Putin’s spokesman also stressed that Russia is ready to help resolve the political turmoil in Venezuela “without interfering in the country’s internal affairs” as Moscow is against any third countries’ meddling in Venezuela’s politics.

The South American nation plunged deeper into political crisis after opposition leader Juan Guaido declared himself interim president following calls for regime change from Washington. The US and some other Western nations were quick to recognize Guaido as the country’s new leader, while Russia, Turkey, Iran, and China pledged their support for President Nicolas Maduro, who was sworn in for his second term earlier this year.

Here is an op-ed by George Galloway 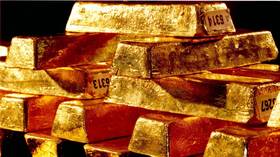 Mystery of the Venezuelan gold: Bank of England is independent of UK govt – but not of foreign govt