A first step toward setting up a EU army to protect the State againstits own citizens.
France And Germany Take Major Step Toward EU Army To Protect "Europe Threatened By Nationalism"


French President Emmanuel Macron's push for what he previously called "a real European army" got a big boost on Tuesday amid France and Germany signing an updated historic treaty reaffirming their close ties and commitment to support each other during a ceremony in the city of Aachen, a border town connected to Charlemagne and the Holy Roman Empire. But the timing for the renewal of the two countries' 1963 post-war reconciliation accord is what's most interesting, given both the rise of eurosceptic nationalism, the uncertainty of Brexit, and just as massive 'Yellow Vests' protests rage across France for a tenth week.
Macron addressed this trend specifically at the signing ceremony with the words, "At a time when Europe is threatened by nationalism, which is growing from within... Germany and France must assume their responsibility and show the way forward."

Germany's Angela Merkel agreed, adding in her own remarks: “We are doing this because we live in special times and because in these times we need resolute, distinct, clear, forward-looking answers.” The agreement, which is being described as sparse on specifics or detail, focuses on foreign policy and defense ties between Berlin and Paris.
“Populism and nationalism are strengthening in all of our countries,” Merkel EU officials at the ceremony. “Seventy-four years – a single human lifetime – after the end of the second world war, what seems self-evident is being called into question once more.”
Macron said those “who forget the value of Franco-German reconciliation are making themselves accomplices of the crimes of the past. Those who... spread lies are hurting the same people they are pretending to defend, by seeking to repeat history.”
And in remarks that formed another affirmation that the two leaders are seeking to form an "EU army" Merkel said just before signing the treaty: “The fourth article of the treaty says we, Germany and France, are obliged to support and help each other, including through military force, in case of an attack on our sovereignty.”
The text of the updated treaty includes the aim of a “German-French economic area with common rules” and a “common military culture” that Merkel asserted could “contribute to the creation of a European army”.
Later before a press pool, Merkel endorsed the idea of a joint European army further:

We have taken major steps in the field of military cooperation, this is good and largely supported in this house. But I also have to say, seeing the developments of the recent years, that we have to work on a vision to establish a real European army one day.

She clarified that the new military organization wouldn't exist as a counterpart to or in competition with NATO, similar to prior comments she made before European parliament.
Previously in November she had assured, "This is not an army against NATO, it can be a good complement to NATO." This was also in support of Macron's early November statements wherein he said of the proposed EU army, "We have to protect ourselves with respect to China, Russia and even the US” — words that were issued on the heels President Trump's initial announcement that the US would withdraw from the Intermediate-Range Nuclear Forces Treaty (INF).
Despite such such assurances analysts say the natural and long term by-product of a "real European army" — as Macron and Merkel suggesting — would be the slow eroding and demise of US power in the region, which would no doubt weaken the NATO alliance.
The closest thing to a current "EU army" that does exist (if it can be called even that) - the Common Security and Defence Policy (CSDP) - is generally perceived as more of a civil and emergency response joint EU member mechanism that would be ineffectual under the threat of an actual military invasion or major event.
Meanwhile perhaps a prototype EU army is already in action on the streets of Paris, revealing what critics fear it may actually be used for in the future... 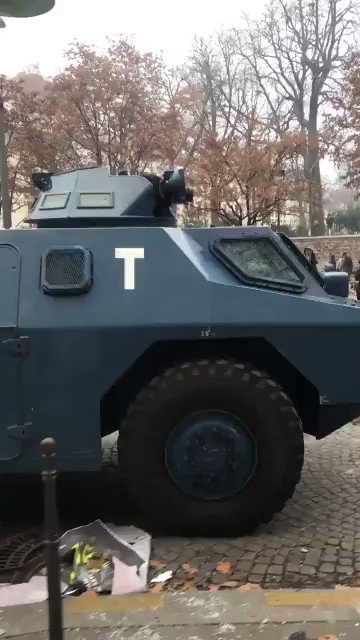 So now we have combat ready armored vehicles with the EU flag which are being used against unarmed European protesters who are demonstrating against a pro EU authoritarian regime.

Still think the #EU is a “project for peace”?#Mscron #GiletsJaunes #YellowVests #Paris #France

13.9K people are talking about this
Twitter Ads info and privacy
The expected push back came swiftly and fiercely as Marine Le Pen, the leader of France’s National Rally party, slammed the updated Aachen treaty as “an act that borders on treason”, while others worried this is an attempt to create a “super EU” within the bloc.
Alexander Gauland of Germany’s Alternative für Deutschland (AfD), for example, warned:

As populists, we insist that one first takes care of one’s own country... We don’t want Macron to renovate his country with German money … The EU is deeply divided. A special Franco-German relationship will alienate us even further.

Italy’s far-right interior minister, Matteo Salvini, warned earlier this month that his country could seek an “Italian-Polish axis” to challenge the whole premise of a “Franco-German motor” that drives European centralization.


Also notable of Tuesday's signing is that the Aachen document prioritizes Germany being eventually accepted as permanent member of the U.N. Security Council, which it mandates as a priority for French-German diplomacy. Such a future scenario on the security council would shift power significantly in favor of a western bloc of allies the US, Britain, and France, which Germany would vote alongside.
Posted by seemorerocks at 20:21