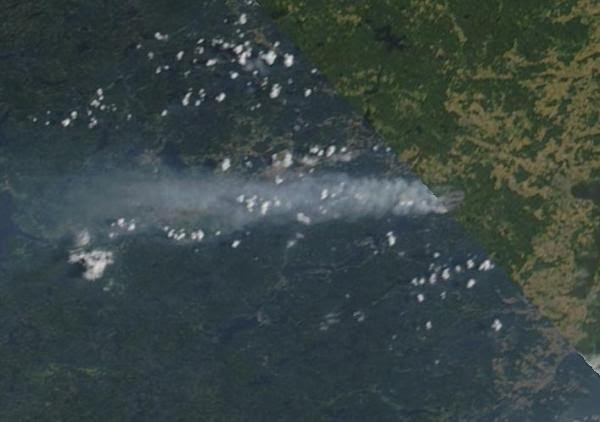 (Sala Fire on August 5, 2014 as seen in this LANCE-MODIS satellite shot. For reference the fire front in this shot is about ten miles wide, the smoke plume, two hundred miles long. Image source: LANCE-MODIS.)
Robertscribbler,
5 August, 2014
It’s been scorching hot in Sweden this summer.
Throughout June, July and into August, the Arctic country has seen day after day of record heat. Thermometers hitting the upper 70s, 80s, and even 90s have become a common event in a land famous for its cooling mists, Arctic lights, and frozen fjords.
By Wednesday of last week, the heat had reached a tipping point. Fire erupted across a ridge line just to the northwest of Sala, Sweden and about 120 kilometers north of Stockholm. The fire rapidly intensified, expanding as nearby towns fell under its shadow.
By Sunday, the blaze spread to encroach upon homes as an all-time high of 33 C (91 F) was recorded in Visby, Gotland even as tumultuous and oddly dry storm clouds brought with them more than 47,000 thousand lightning strikes, shattering Sweden’s all-time one-day lightning record and igniting numerous smaller fires throughout the nation.
On Monday, the situation reached a new extreme as numerous communities were threatened with black smoke billowing into streets and neighborhoods.
By today, more than 1,000 people were evacuated and one soul lost as the blaze expanded to cover a region encompassing 15,000 hectares — about equal to 21,000 football fields or 57 square miles. It is now the largest fire in at least 40 years to affect Sweden.
“I feel deeply concerned for the people who have been asked to leave their homes. I also understand that it is a very tough situation for all those struggling to fight the fire.” — King Carl Gustaf, on Tuesday, August 5

(Forecast high temperatures for Europe on Tuesday, August 5 show readings above 26 C [80] F extending well past the Arctic Circle in Sweden. Image source: WeatherOnline.)
Reports from the scene are of chaos with eyewitnesses comparing the event to a war zone. In Norberg, fires threatened to enter city neighborhoods as residents were obliged to stop seeking help from over 100 volunteers to defend their homes due to risk of loss of life. The decision to halt volunteer efforts came after 9 of the workers were trapped by encroaching flames.

The fires are extraordinarily energetic and appear to have engaged the basement layer. As with other recent Arctic fires in permafrost or near permafrost zones, areas well below the surface soil zone are involved, resulting in risk of a very intense, long time-scale event:
“It’s burning deep down into the ground and across large surfaces,” fireman chief Per Hultman said in an interview with Expressen. “It’s going to take months to extinguish.”
Norberg had not yet issued evacuation orders but officials there were advising the town’s 4,500 residents to pack their bags and be ready to leave at a moment’s notice. 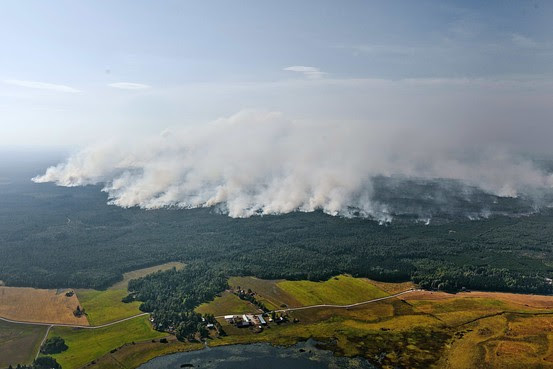 (Sala Fire races across a local hillside on Sunday, August 3rd. Image source: Here.)
A large scale response to the blaze includes a small army of fire fighters from three Swedish regions, the Swedish military and aid from the European Union nations France and Italy.

By Tuesday afternoon local time, the situation remained extremely dangerous with the blaze still raging out of control even as clouds and light rain moved in, providing firefighters with some hope that the fire might lose some of its extreme intensity. However, current reports still indicate that the situation at the site of Sweden’s worst fire in 40 years remained very tenuous with concerns that a shift in the wind to the north might sweep the fire on into Norberg.
Conditions in Context: Human Warming Means More Arctic Fires
Under an ongoing and repressive regime of human-caused climate change fires like the Sala blaze are expected to proliferate and intensify as time moves forward. A combined set of conditions including a permafrost thaw line moving rapidly northward, increasing record heat, temperatures that are rising at a rate twice that of the global average, and deadwood multiplying invasive species are just a few of the ways climate change enhances fire risk. The thawing basement permafrost is particularly vulnerable to fire once it thaws and dries. It creates a peat-like pile, in most places scores of feet deep, that can burn for extended periods and re-ignite long extinguished surface fires. Near or north of the Arctic Circle, there are almost no land zones not under-girded by a thick permafrost layer. It represents a very large pile of potential fuel for fires as it thaws.
So, unfortunately for Sweden and for other Arctic nations, the fire situation is bound to worsen as warming continues to progress.
Links:
LANCE-MODIS
WeatherOnline
Emergency Crews Ready for Fire to Spread
One Dead, Hundreds Evacuated as Swedish Forest Fire Rages
One Dead as Swedish Fire Rages on
New Heat Record Sizzles and Strikes Sweden
Hat tip to Colorado Bob
Hat tip to John Lonningdal


First 100°F Temperature on Record in the Baltics

The 37.8°C (100.0°F) temperature observed at Ventspils, Latvia on August 4th was the first time on record that a reading of 100°F has been measured in any of the Baltic nations (Latvia, Estonia, and Lithuania). The heat wave has also affected Poland, Belarus, and Sweden where a massive forest fire, said to be the worst in the nation's modern history, rages out of control.

The record was especially unusual since Ventspils (also known as Ventspili) is a coastal location situated right along the shores of the Baltic Sea. The previous Latvian record of 36.4°C (97.5°F) on August 4, 1943 (same date!) was measured at Daugavpils which is an inland location near the border of Belarus and where hotter temperatures might be expected vis-à-vis a coastal location.

The reason for the excessive temperature at Ventspils, this time around, was a strong offshore flow caused by a high-pressure system centered over northeast Russia and Finland.

A strong surface high pressure centered over Finland and northeast Russia (bottom map) along with a 210-meter positive height anomaly (top map) created a southeast (offshore) flow over the Baltic nations early this week leading to the record temperatures at the Latvian coastal location of Ventspils. Maps of 12Z ECMWF models for August 4th courtesy of Nick Wiltgen at The Weather Channel.

The heat wave has also affected Poland where temperatures as high as 35.4°C (95.7°F) were observed at Ustka on August 3rd.  Late word from blog reader Blair Trewin (Australian Bureau of Meteorology) notes that the Swedish met service (SMHI) has reported at temperature of 35.1°C (95.2°F) at the town of Falun on August 4th and that this is the hottest August temperature observed in Sweden since 1992. Sweden’s national record is 38.0°C (100.4°F) set at Ultuna on July 9, 1933 and also at Malilla on June 29, 1947. A massive 15,000-hectare (37,000 acre) forest fire in central Sweden, described in the press as “the largest in modern [Swedish] history” is threatening the town of Norberg (population 4,500). One death has so far been attributed to the conflagration.

This large forest fire in central Sweden is threatening the evacuation of the entire population of the town of Norberg (population 4,500). Photo credited to TT, ‘The Local: Sweden’s news in English’.

KUDOS: Thanks to Maximiliano Herrera, Blair Trewin, and Nick Wiltgen for their contributions to the data and blog reader barbamz for news about the Swedish fire.


Weather Historian
Posted by seemorerocks at 17:06