The world has spent $1.8 trillion on its military in 2018 with the US leading the charge 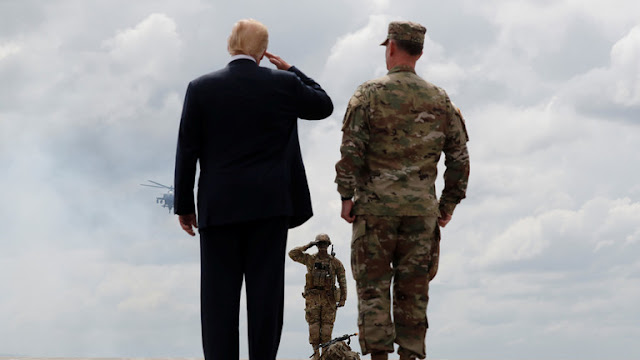 The world has spent $1.8 trillion on its military in 2018. The US is leading the charge, while some of its NATO allies are also buffing their war budgets citing the Russian threat despite Moscow decreasing its military spending.

The past year has been immensely successful for the war industry, according to data from the Stockholm International Peace Research Institute (SIPRI). According to its newest report, released on Monday, global military spending went up 2.6 percent to reach its highest level since at least 1988, when researchers began tracking the data. 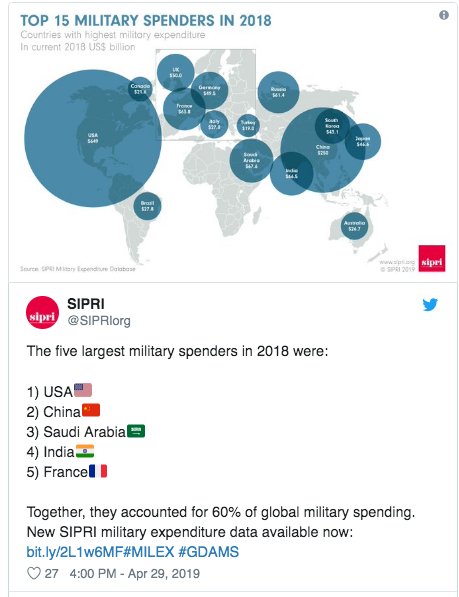 US military expenditure stood at $649 billion last year, which amounts to 36 percent of the world’s total. Washington outspent its closest rival, China, by almost 200 percent. It also spent almost as much as the next eight countries combined.

The surge in military spending has been fueled by the exacerbating rivalry between the US and China, as well as the strained situation in Asia where India increased its spending by 3.1 percent and Pakistan by 11 percent.

“The tensions between countries in Asia as well as between China and the USA are major drivers for the continuing growth of military spending in the region,” said Pieter Wezeman, a senior researcher at the SIPRI Arms and Military Expenditure (AMEX) program.

While Washington has been an undisputed leader of the chart for years, last year it upped its game even more, increasing its military spending for the first time since 2010. The surge in US defense spending is a direct reflection of the Trump administration's policy, according to SIPRI.

"The increase in US spending was driven by the implementation from 2017 of new arms procurement programs under the Trump administration," Dr Aude Fleurant, director of the SIPRI AMEX, noted.

Staying true to an upward trend of 24 years, China increased its spending by five percent. However, the pace of its military growth has slowed down to its lowest since 1994. In total, Beijing forked out $250 billion for military needs.

Despite decreasing its military spending by a record six percent, Saudi Arabia retained third place, having spent $67.6 billion. India landed in fourth place with $66.5 billion, followed by France on $63.8 billion.

Russia slipped two places to claim sixth spot by spending some $61.4 billion on the military in 2018, 3.5 percent less than in 2017. Even though the numbers indicate that Moscow is not the country fueling a new arms race, SIPRI reported that a huge uptick in military spending by Poland (growing by 8.9 percent), the Baltics, Bulgaria and Romania and several others are due to the purported Russian scare.

“The increases in Central and Eastern Europe are largely due to growing perceptions of a threat from Russia,” Wezeman said.

While Trump has been behind a drastic increase in the Pentagon budget and that of NATO, the US president has recently lamented that the money would be better spent elsewhere, calling on China and Russia to “get together” and stop “making these weapons.”

If the world were to spend this money on something else, the amount in question would constitute 2.1 percent of global gross domestic product (GDP) or $239 per person, according to the SIPRI report.