The UN special representative to Iraq, Nickolay Mladenov, has called on the international community to prevent “possible massacre” in the northern town of Amerli, which has been under siege by Islamic State militants for two months. 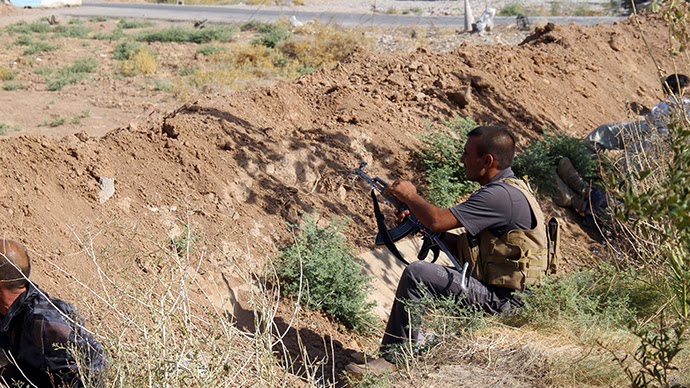 RT,
23 August, 2014
Amerli has no electricity and little food or medicine but unlike the US-led intervention to save the Yazidi community trapped on Mount Sinjar, there is no rescue plan at all for these people.
Nickolay Mladenov, special representative of the United Nations secretary-general for Iraq, has called on the international community to halt "the unspeakable suffering of Amerli's inhabitants. The situation of the people in Amerli is desperate and demands immediate action to prevent the possible massacre of its citizens," he said.

"The town is besieged by ISIL [the Islamic State] and reports confirm that people are surviving in desperate conditions. I urge the Iraqi government to do all it can to relieve the siege and to ensure that the residents receive lifesaving humanitarian assistance, or are evacuated in a dignified manner. Iraq's allies and the international community should work with the authorities to prevent a human rights tragedy," he added.

The majority of the residents of Amerli, a town in northern Iraq just 180 km from Baghdad, are from the Shia Turkmen community, which makes up about 4 percent of the Iraqi population. The Islamic State (IS, formerly ISIS/ISIL) believes they are apostates and have killed and carried out abuses on them in other parts of Iraq.
“After the attack of Mosul, all the Shia Turkmen villages around Amerli were captured by the Islamic State. They killed the people and displayed their bodies outside the village,” Dr. Ali Albayati, an Amerli resident who works with the Turkmen Saving Foundation, an NGO trying to improve conditions for the Turkmen community in Iraq, told the BBC.

Dr. Albayati explained that residents of the besieged town have been fighting IS militants for 70 days, and the situation is becoming impossible, with many people already dead.
“We have no electricity, no drinking water. We are depending on salty water, which gives people diarrhea and other diseases. Since the siege started, more than 50 sick or elderly people have died. Children have also died because of dehydration and disease,” he said. A Iraqi Turkmen Shiite fighter, who volunteered to join the government forces, holds a position on August 4, 2014 in Amerli, some 160 kilometres (100 miles) north of Baghdad. (AFP Photo / Ali Al-Bayati)

Up to 20,000 people are holed up in the town fighting off death, many of them children who are only eating every 2-3 days. Although most of the residents in the town are farmers, the fighting has forced them off their land and crops have been neglected.

The only food supplies that are getting into the town are from Iraqi army helicopters, which come once a day at the most and what they bring is not enough for all the people still trapped in Amerili.
Dr Albayati is often on those helicopters trying to make sure the most essential provisions get delivered.
“Woman have died [in] childbirth because there aren’t enough doctors here. People are dying from simple wounds because we don’t have the means to care for them,” he said.

Dr Albyati lives in the town himself with his wife and children.
As well as fending off hunger, it’s the residents alone who are defending the town against IS with no help from the Iraqi army, which has yet to win a single victory against the Islamic State.
Dr. Albyati says that surrendering to the IS will only mean death.
"You know what happens when Islamic State captures a village?" Dr Albayati asks. "They capture all the men, women and children and they kill them all, believe me. They keep just a few girls, you know, for other things...,” he said.

Sundus Abbas, a UK representative of the Iraqi Turkmen Front, a Turkmen political party said she is campaigning to get the West to intervene as they did on Mount Sinjar.
This week the UN launched a major new campaign to get aid to over half a million people displaced in northern Iraq, but as Amerli is inaccessible by land it’s residents have no chance of receiving support except by air, or by making it to refugee camps.

United Nations officials in Iraq are warning that a massacre could take place in a town where thousands of members of the Shia Turkmen minority are besieged by Islamic State militants. A Iraqi Turkmen Shiite fighter, on 4 August 4, 2014 in Amerli. Amerli has been besieged by Islamic State for two months. Photo: AFP FILE

Only small amounts of aid have been delivered by Iraqi army helicopters.
The UN said it fears the jihadists could overrun the town as they have done elsewhere in Iraq, showing no mercy to those who deviate from their extremist interpretation of Islam.

A UN special representative, Nickolay Mladenov, said he is "seriously alarmed" by reports regarding the conditions in which the town's residents live.

The town, under siege by the Islamic State for two months, has no electricity or drinking water, and is running out of food and medical supplies.

The majority of its residents are Turkmen Shia, seen as apostates by IS.