What this is really saying is that there are so many reasons why the earth should be cooling (including a solar minimium) – yet, despite that, mankind is managing to heat it

Take a look at the most recent sea surface temperature anomalies map provided by NOAA and what do you notice? The first thing is that most of the world’s oceans are warmer than normal for the base period of 1971-2000. But the eye is drawn to a telling patch of blue (cooler than the average) in the Eastern Pacific. This patch of blue water is enough to keep the Pacific Ocean on the La Nina side of neutral. Such conditions have prevailed through much of 2013.

Usually, such a patch of cooler water lasting for extended periods would tend to depress global surface temperatures, pushing them closer to the colder range of the scale. But, according to the NASA, June was anything but cool, marking the second hottest June on record when global land and ocean surface temperatures are averaged.

As you can see in the image above, almost all the Earth’s surface was blanketed with warmer, much warmer, or record warmest temperatures. Only small areas showed cooler or much cooler than average temperatures. No regions in the data set showed record coldest temperatures. Perhaps most ominously, a huge amount of this excess heat has been dumped into the higher lattitudes, with Antarctica and a ring near and just below the Arctic Circle showing the highest temperatures — a symptom of the rash of Arctic Heatwaves that began in June and are still ongoing.

The second hottest June on record occurred during a period of the Pacific Oscillation that results in more upwelling of cooler waters from beneath the surface. This transfer of colder, deeper waters to the surface layer interacts with the atmosphere and tends to have a net cooling effect. The result, under normal conditions, is that Earth cools during these periods. Such periodic upwelling and surface cooling of ocean waters is reflected in this month’s NCDC report which showed that world ocean surface temperatures were the 10th  hottest on record, lagging land surface temperatures which were 3rd hottest. NCDC’s measure found that June was the 5th hottest on record, compared to NASA’s finding that Earth experienced its second hottest June on record.

A new report on the effects of the Pacific Oscillation on natural climate variability and human warming is available at Skeptical Science. The report shows that the negative, cooling phase of the Pacific Decadal Oscillation has been underway since at least the middle of the 2000s. But despite the emergence of a pattern that would drive the Earth to cool, Earth has experienced its two hottest years on record — 2005 and 2010 — during that time.

The driving force for this accumulating heat during a period that would naturally cool the Earth is a massive and ongoing accumulation of greenhouse gasses in the Earth’s atmosphere. Last year, human carbon emissions hit 45 gigatons with CO2 hitting a record near 33 Gigatons. In addition, some parts of the Arctic are also starting to see large carbon emissions from stocks long sequestered in the ice but that are now being forced to thaw by human-caused warming. The combination of the human forcing and an amplifying feedback in the Arctic is almost certainly driving Earth to warm, against trend, even when natural variability would be pushing it hard to cool.

The Skeptical Science report explored a model study that showed decades of negative Pacific Oscillation would result in net cooling of about .04 degrees Celsius. But the current period, though showing a somewhat slowed pace of atmospheric warming, has shown no net cooling when averaged over time. The fact that June 2013 is the second hottest June on record, despite the fact that we are in a ‘natural cooling trend’ is yet one more evidence of how powerful the human global warming forcing has become.

Eventually, the negative Pacific Decadal Oscillation will switch back into a positive phase. At that point, we will be hit with a surge of warming to make all past hot decades seem paltry by comparison. This heat pulse is coming. It may be 5, 10, even 15 years out. But it is surely coming. Meanwhile, conditions slowly worsen as we await the next heavy blow.

This is from author Sam Carana:

"Thanks for spotting that, Risa, I've added a photo of the North Pole webcam to the post, showing lots of water and, yes, that it's raining. Indeed, Robin, there are areas close to the North Pole where the ice is actually thinner (or absent) than some areas closer to Europe or Siberia, as discussed in the post at http://arctic-news.blogspot.com/2013/06/open-water-in-areas-around-north-pole.html

Arctic sea ice extent 2013 (brown line on NSIDC-image below) is more and more following the same path it did last year (dashed line), when extent reached a record minimum, and in 2007 (blue line), the previous record minimum. 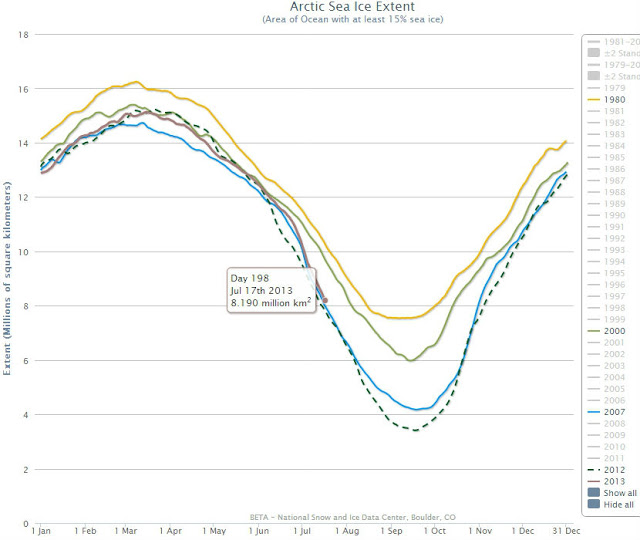 Even more worryingly, sea ice is very thin, as the Naval Research Laboratory animation below shows; large areas with a thickness of 1 meter to zero persist close to the North Pole, as discussed in an earlier post; the animation further shows the retreat of sea ice from the Kara Sea, north of Siberia, over the past 30 days.

As can be expected, high sea surface temperature anomalies show up in areas where the sea ice has retreated, as shown by the DMI image below. 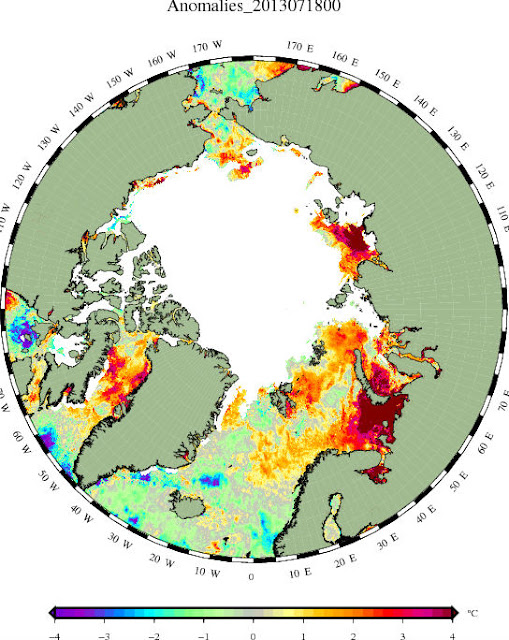 Most worryingly, high methane readings appear over the Kara Sea, as shown on the image below.

Posted by seemorerocks at 15:02