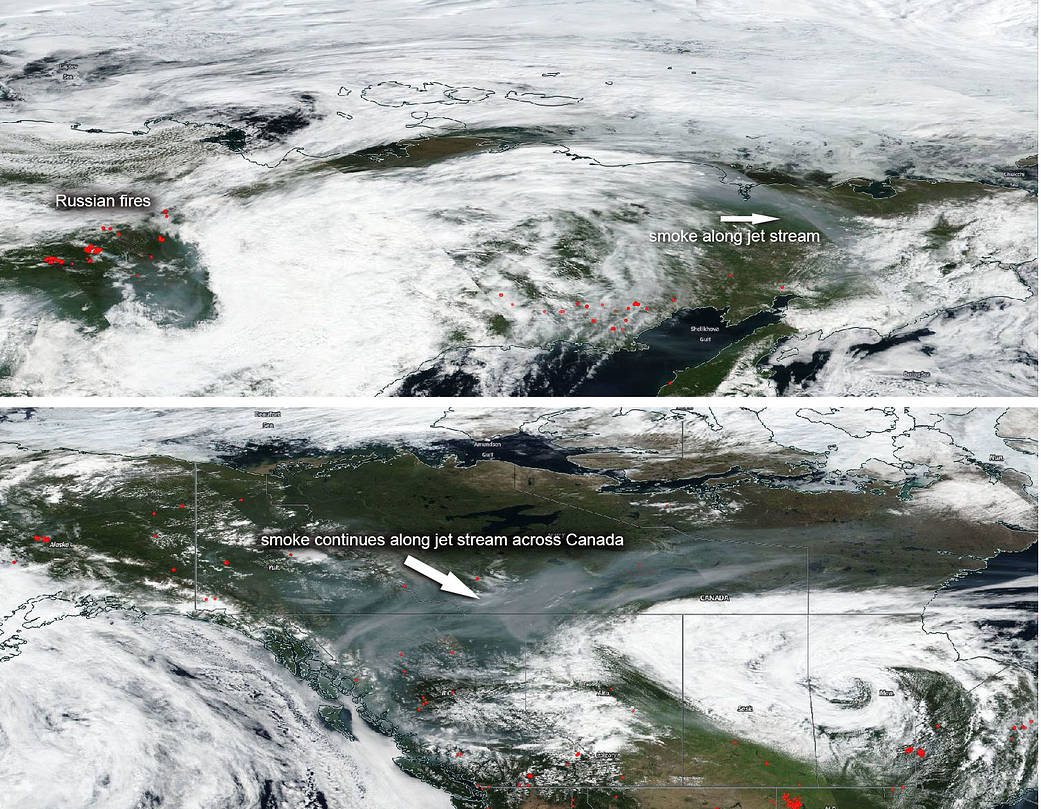 The Siberian area of Russia is experiencing a huge wave of wildfires in their taiga forests. Hot, dry weather complicates the outlook for getting these fires under control.  Estimates of the amount of land burning at present have been as high as ten million hectares since the beginning of 2018 which is 38,610 square miles. Fires are dangerous, of course, and do significant damage to the area where they are burning, however, smoke is dangerous as well and can spread so much more quickly than fire as evidenced by this satellite image showing the smoke from the Siberian fires reaching Canada.
The smoke released by any type of fire (forest, brush, crop, structure, tires, waste or wood burning) is a mixture of particles and chemicals produced by incomplete burning of carbon-containing materials. All smoke contains carbon monoxide, carbon dioxide and particulate matter or soot and is hazardous to breathe. Recently though, a study was published in Nature Geoscience in May 2017 which discovered that particle pollution from wildfires, long known for containing soot and other fine particles known to be dangerous to human health, is much worse than previously thought.  Naturally burning timber and brush from wildfires release dangerous particles into the air at a rate three times as high as levels known by the EPA, researchers at Georgia Tech found.  The study also found wildfires spew methanol, benzene, ozone and other noxious chemicals.  Residents that smell smoke or see haze in the air should take precautions against breathing too much of it and stay tuned to local air quality information.
This satellite image was captured on July 23, 2018. Actively burning areas (hot spots) are outlined in red. Each hot spot is an area where the thermal detectors recognized temperatures higher than background. When accompanied by plumes of smoke, as in this image, such hot spots are diagnostic for fire. NASA image courtesy of the NASA/Goddard Space Flight Center Earth Science Data and Information System (ESDIS) project. Caption by Lynn Jenner with information from Georgia Tech study (Journal reference:  https://www.nature.com/articles/ngeo2960)
Last Updated: July 25, 2018
Editor: Lynn Jenner

Taiga burning’ - as scared bears are driven out of their natural habitat towards settlements where they are shot as danger to people.

Latest reports show 27 fires across Krasnoyarsk region covering 8,682 hectares in.
Dramatic new pictures show the latest forest infernos as reports come from the US that wildfire smoke from Siberia has blown some 5,000 miles to New England.
This comes as clouds are being spiked with chemicals in Yakutia to provoke rain to extinguish flames - and amid claims from environmentalists that the scale of forest fires has been hidden by the authorities.
In the US, Storm Center 7 Chief Meteorologist Eric Elwell was quoted saying: ‘Strong winds aloft in the polar jet stream carried some of the smoke from the fires across the Bering Strait and into northern Alaska, then southeastward into central Canada and eventually across the Great Lakes and eastward into southern New England.’